ZURICH - Swiss is owned by Lufthansa and part of the Lufthansa group - and is its showcase, achieving the highest profits, boasting its own Swiss identity. But its long haul fleet, which, besides 14 modern A330-300s, still consists of 15 elderly Airbus A340-300s, has to be partially renewed.

That's why Swiss has ordered nine Boeing 777-300ERs, mostly because they were available on short notice at attractive prices. That's because the new model 777-9 already looms on the horizon, of which Lufthansa has ordered 34, due to arrive from 2020. 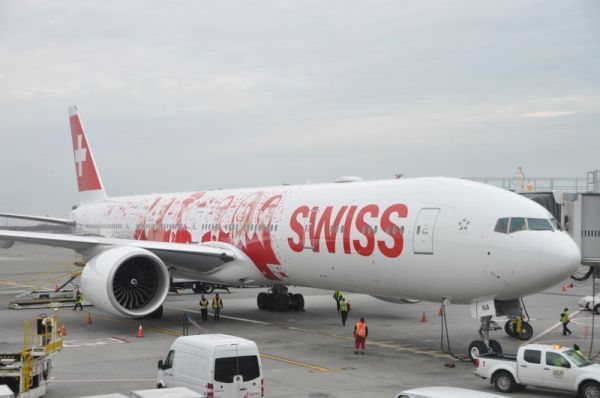 At the end of January, the first 777 was delivered to Swiss, and thousands of spectators gathered at Zürich airport, as in Switzerland, a Boeing 777 bearing the country's flag on the tail really still is a crowd puller. A total of six 777s will be joining the fleet this year, the remaining three in in 2017, there might be more coming afterwards.

To train more pilots, New York-JFK became the first long haul destination, being replaced by Montréal from the end of March. Regular flights will be launched from June to Los Angeles, followed by Bangkok, San Francisco, Sao Paulo and Tel Aviv.

In the first phase of Swiss's introduction of the 777, the aim is to accumulate enough flight hours, take offs and landings on the 777 for all pilots in training. After delivery, there were days of training in Palma de Majorca, and when the airport got shrouded in fog, the touch and go sessions were relocated to Schwerin/Parchim in Northern Germany, of all places.

Since early February the first Swiss 777 registered HB-JNA was then deployed on European routes, often between Zürich and Frankfurt, but also to Hanover or Geneva. Even on the morning of the first long haul flight, another short haul rotation kicks off the day. That's why the departure to New York starts from gate D39 in the old central area of Zürich airport, and not like all other Swiss long haul flights from satellite terminal E. 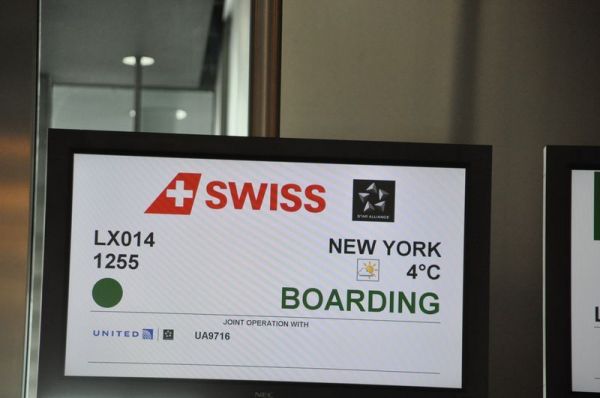 Swiss LX014, © Andreas Spaeth
This means I miss out on my first regular visit of the superb new lounge that has been opened coinciding with the arrival of the first 777. Swiss long haul passengers traveling in First or Business class are entitled to use the new luxurious waiting area, boasting over 3,300 square meters of space.

The well-lit, spacious lounges offer different areas for relaxation, work or eating from the buffet with front cooking, with dishes being prepared in front of guest's eyes. The highlight is the accessible outdoor terrace, offering panoramic views of the whole airport, in good weather a very inviting place to breathe fresh air.

As frequent flyer with Senator status or as a First class guest you have access to one of two available hotel rooms, if unoccupied, including ultra-comfy beds and aircraft views. Unfortunately these rooms are only offered during the lounge's opening times and not overnight. Or you can try out the Whiskey bar, offering more than 120 kinds of the drink, including cherished brands originating from Switzerland to India. In summer, food will even be served on the outdoor terrace, including Swiss cheese fondue.

But all this remains wishful thinking today, because I neither have the required frequent flyer status nor am I flying First class, but it is still nice to see which good ideas become reality here. On the day of my departure from terminal D I am not using the older Business Class lounge there, usually utilized by passengers of European flights.

Instead, I am enjoying the gate party celebrating the first flight of the 777 on long haul with live music, canapées and champagne.

Already in a vibrant mood, I am approaching the boarding area fairly late, there is even no queue any more, but then I receive an unexpected "welcome" from the TSA: My boarding pass, formerly pristine white in its upper part, is all of a sudden adorned with four ugly, big letters "SSSS", meaning I have been selected for a random extra security check, a usual practice on flights within and to the US. I have to wait in a makeshift compartment near the gate to be patted down again, my carry-on is opened and checked, but all in a calm and efficient manner. 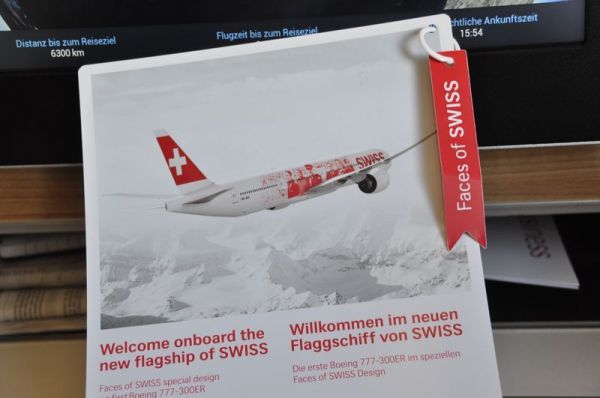 Then finally, I can board the aircraft so brightly displaying portraits of 2,500 Swiss employees on its fuselage - there is even a special plastic card in the seat pocket with explanations of the "Faces of Swiss". The biggest twelve heads of staff, being drawn for this format in a lottery, measure seven meters in height, the total foil necessary for the decals measures 450 square meters and weighs only 50 kilos in total.

The Business cabin offers 62 seats, two rows in a separate compartment in front of the galley, eleven rows behind. My seat is 7K, in the first row of the aft cabin, at the window in front on the right side. Business Class is fully booked today, but it still doesn't look crowded. 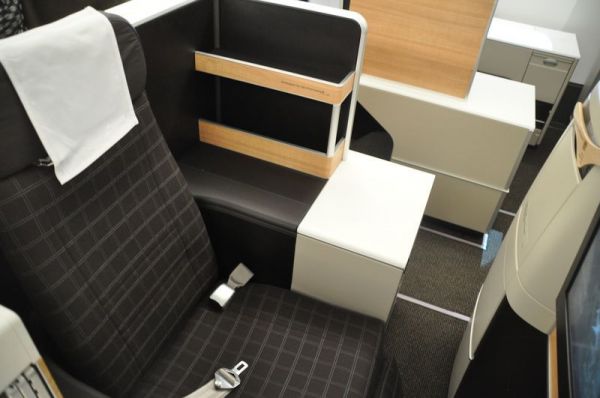 This is thanks to the division of the cabin, the rows are in alternating configurations of 1-2-2 or 2-2-1, being visually well segregated. Resulting are also twelve single seats, the A-seats in even-numbered rows (except row 6) as well as the K-seats in uneven rows. These throne-like seats with wide storage areas on both sides are pre-reserved for frequent flyers with HON or Senator status.

But inquiring at check-in or at the gate might still be useful, often there are still "thrones" available, because, as Swiss staff points out to me, many passengers don't even like to sit as isolated. The seats are an evolutionary design of the current Swiss Business product. The tables, folding out sideways, are now much sturdier and such better suited also for working on a laptop.

The dividing walls are now offering more privacy, even though Swiss offers considerably less single seats compared to for example Air France or Singapore Airlines with their 1-2-1 configurations on the 777. The enhanced Swiss Business seat offers more stowage like a shoe compartment close to the floor and an enclosed rack underneath the 16-inch-screen, even able to store laptops or tablets. 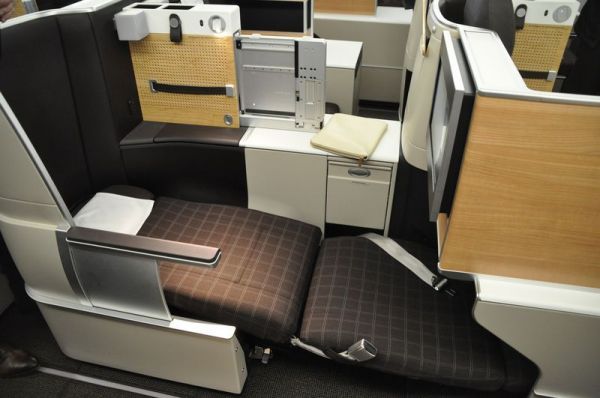 Some seats, for example those in the middle section, have considerably more storage capacity than others - at seat 7K there is an additional open shelf above the screen. A plus is the ample foot space, also when the seat is in bed position, in comparison to the current Swiss product, but even more in contrast to the very tight foot box Lufthansa's Business seats offer.

By adjusting air pressure in the Swiss-specific pneumatic cushion, the firmness of the seat can be made softer or harder, by the push of a button.

Only slightly delayed, flight LX19 takes off from Zürich-Kloten shortly after 1pm local time. New on board is the possibility, besides online access offered in fairly expensive data packages ranging from 20 MB for 9 Swiss francs (€ 8.20) to 120 MB for 39 francs (€ 35.70), the chance to use your own mobile phone for voice calls. At least on daytime flights as well as during inflight service hours on night flights.

But on the premiere flight there is a bug in the communications technology, online access only works for minutes on the eight-hour flight, and phone and SMS is only accessible very sporadically and with certain providers. The crew doesn't make any announcement about the lack of connectivity and assures not to know where the problem lies when asked.

As part of the new Panasonic IFE system, each passenger can use up to three screens simultaneously: The main screen in front of you, the small on in the remote control stored in the armrest as well as the one of your own smartphone, connected to the on-board wifi and displaying for example the route flown. 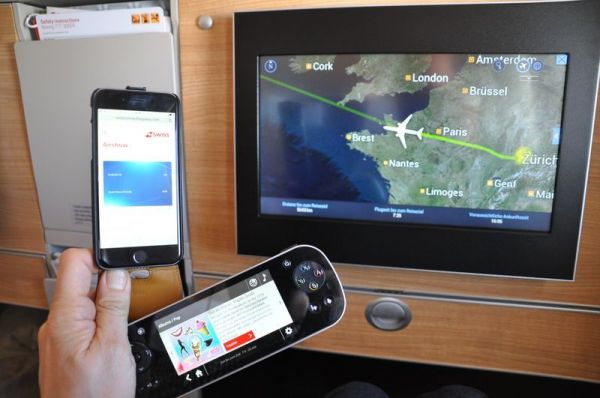 This is only of limited use, but still an advantage to watch a movie on the main screen and follow the route on the handheld one. The Airshow system offers some new features as the actual displays of some cockpit instruments like pitch and rotations, true air speed or heading, but it still is by far not as interactive as other modern systems. 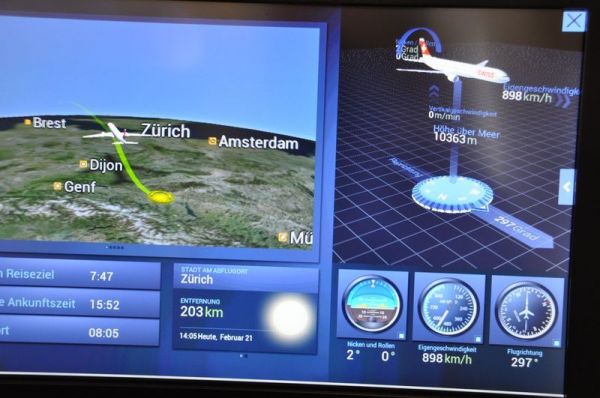 The courteous inflight service on this inaugural flight is painfully slow, probably due to unfamiliarity with the new aircraft. The appetizer of Tafelspitz beef carpaccio is beautifully arranged. The main course arrives only two hours and 13 minutes after take-off, much too late, and until desert is served, over three hours have passed since wheels up.

From the four main menu options (among them veal ragout, cordon bleu and pikeperch) I choose the Asian-vegetarian Malaysian vegetable rendang, created by the world's first vegetarian restaurant Hiltl in Zürich. Looks uninspiring, but tastes terrific. Nice the assortment of cheeses served on a small slab of stone, and the dessert, chestnut cake with lingonberry compote.

A Swiss white wine, the Spiezer Riesling Sylvaner, is the perfect companion to this menu. My afternoon nap on the extended bed is so comfy that it lasts almost two hours. The variety of IFE content is well sorted, but by far not as vast as for example at the big Gulf carriers. The snack before landing is on the delightfully light side, lamb's lettuce salad and a fruit salad. 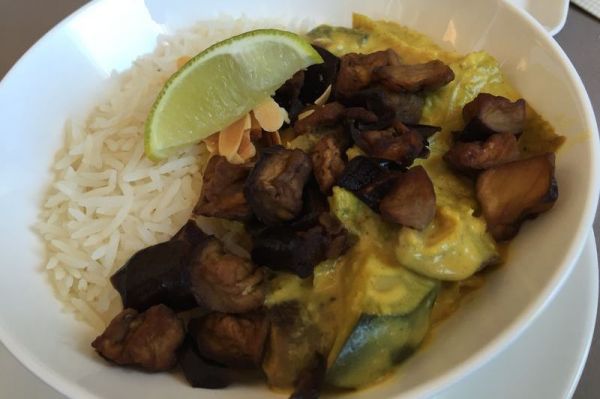 Asian-vegetarian Malaysian vegetable rendang, © Andreas Spaeth
Almost punctual on the very minute, flight LX14 lands in New York and docks at Terminal 4. There are long queues at immigration, but for arriving passengers from visa-waiver countries like Germany, who don't use their ESTA for the first time, the new kiosks offer a welcome relief and speed up immigration considerably, especially when the arrivals area is crowded.

The Boeing 777-300ER offers especially for Business Class customers a significantly enhanced product, that besides Austrian Airlines's Business Class counts among the best in the Lufthansa group. Once inflight service delivery reaches a normal pace and internet access works, this will be a very solid offering.