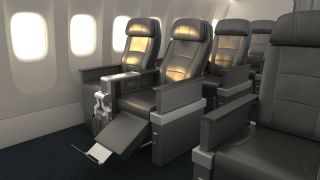 DALLAS - American Airlines Group will be the first U.S. carrier to offer a premium economy cabin with more legroom, in a bid to win overseas travelers seeking extra perks at a lower price than in business class.

The 21-seat, three-row section will debut Nov. 4 on the carrier’s first Boeing Co. 787-9 Dreamliner on flights between Dallas-Fort Worth International and Madrid and from the Texas airport to Sao Paulo. The seats will be available only to top-tier members of its AAdvantage loyalty program until early next year, when they will go on general sale, American said Thursday. Ticket prices haven’t been announced.

American’s cabins will have wider seats with more legroom than those in the coach cabin. They’ll also offer extendable foot-, leg- and headrests, larger seat-back monitors, an enhanced menu and a free checked bag.