Lufthansa to introduce new Economy Class with A350-900

MUNICH - Lufthansa will introduce an all new long haul Economy Class with its first Airbus A350-900 scheduled to arrive at the carrier`s Munich base early 2017. Seats in light and navy blue covers expel the grey from Lufthansa`s Economy cabins and will be "padded a tad less firmly", according to the airline.

A rendering provided by Lufthansa to PaxEx.com sketches the A350-900 cabin behind Business Class and Premium Economy curtains. 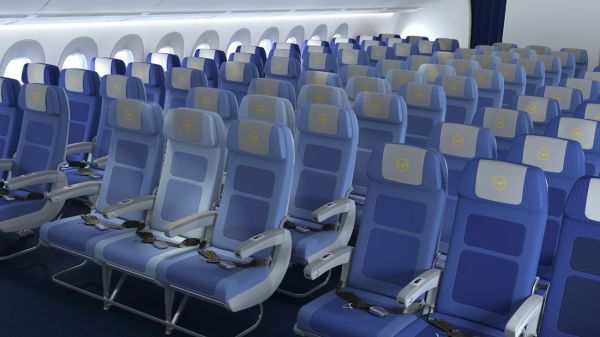 The ergonomically designed seats will be supplied by Zodiac Aerospace and accomodate larger IFE screens, according to Lufthansa. Lufthansa will equip the A350 with 224 regular Economy seats in 3-3-3 rows.

The A350-900 will arrive without a First Class and stick to Lufthansa`s current Business Class offering with 48 B/E Aerospace berths. Lufthansa opted for Business Class center bins on the A350, Karl-Henner Wilhelm, Head of A350 EIS at Lufthansa, told PaxEx.com during a factory visit in Toulouse last week.

A convenient gadget Lufthansa will introduce with the A350 is a self-service bar stacked with snacks and drinks in Business Class. In-flight WiFi will be available in all classes.

Lufthansa ordered 25 A350-900 in 2013 and will deploy the first ten aircraft from its Munich base by summer 2018. Lufthansa hinted Delhi and Boston as possible first routes in its A350 network starting early 2017. As of September Airbus has three Lufthansa A350s in final assembly or painting.