Taking Cathay`s new A350 from Dusseldorf to Hong Kong

HONG KONG - Since the summer, Cathay Pacific is the sixth operator of the new Airbus A350-900, on September 1st the new aircraft took up its first long haul route in the Cathay network: From Hong Kong to Düsseldorf and back.

The Rhein/Ruhr airport is morphing more and more into a small hub for Asia - thanks to Air China, ANA, Singapore Airlines (with the A350 as well) - and now Cathay Pacific. After it operated the route already for a year, utilizing the Boeing 777-300ER, it now puts the A350 to work here four times a week. 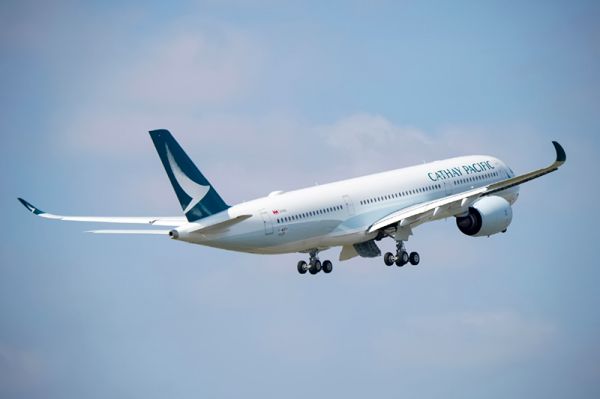 But the premiere return flight to Hong Kong didn't quite start as planned. After the third of four A350s in the fleet - at the time - landed from Asia on time that morning, there are problems before the next take off. The scheduled departure time of 13.25 will slip, that's clear an hour before, but passengers are only informed much later and quite vaguely.


Flight Report
Airline
Cathay Pacific
Aircraft Type
Airbus A350-900
Registration
B-LRC
Cabin
Business Class
Date
September 1st 2016
Route
Dusseldorf - Hong Kong
Flight
CX376
And there is no specification of the problem, apparently a technical fault in one of the cockpit systems. A well-reputed airline should communicate more pro-actively. Especially as Business Class guests have to use the Lufthansa lounge, between which and the gate lies passport control, which some customers have to pass through multiple times on this day.

At some point it is announced that the new departure time is 15.00, in fact flight CX376 then only lifts off at 15.37, more than two hours late. One would have liked to hear an announcement about this on board, an explanation and apology, which never comes.

So it is up to Cathay's newest aircraft to provide for a good mood, because the cabin of the A350 is definitely something to show off. With 280 seats, of which 38 are located in Business Class, 28 in Premium Economy and 214 in Economy, Cathay is one of the most generous A350 operators, while for example LATAM or Ethiopian Airlines are squeezing in up to 348 passengers.

I am touring the entire cabin before departure, and the greatest innovation is to be found in Economy: The head rest offers a new level of support, fixating the head and avoiding a move to either side. 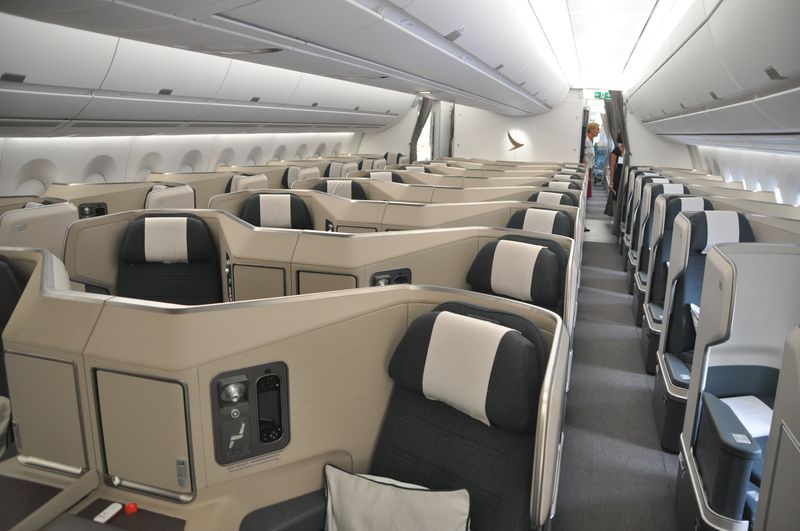 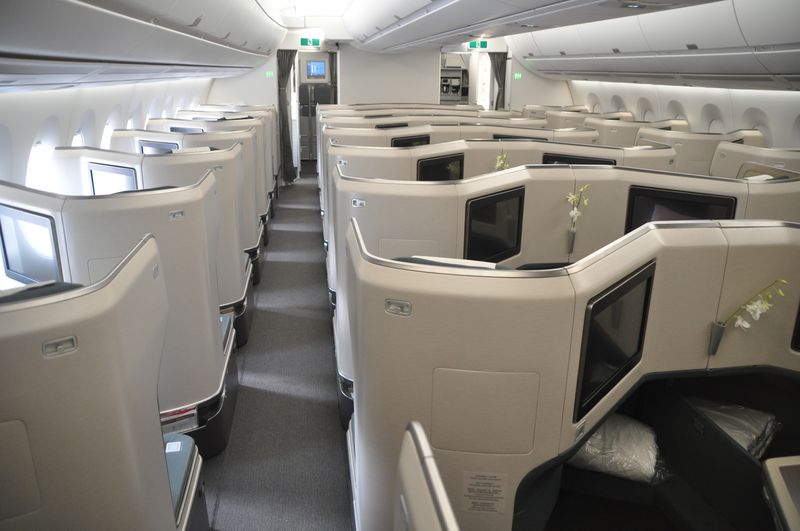 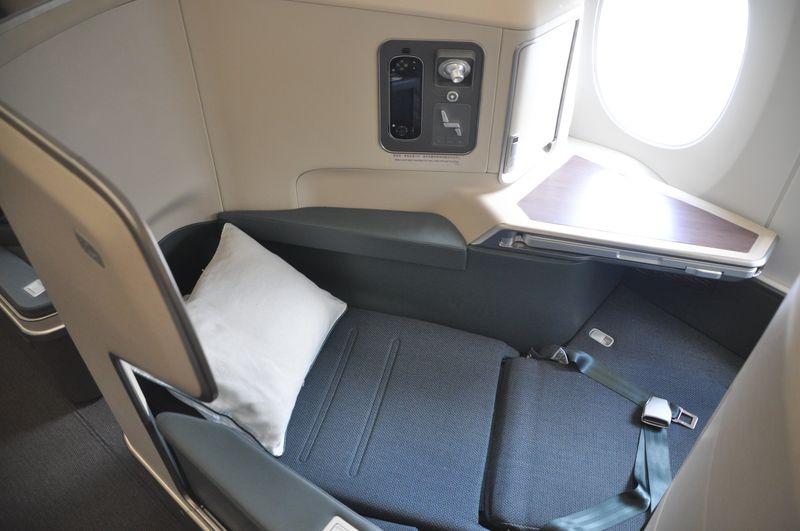 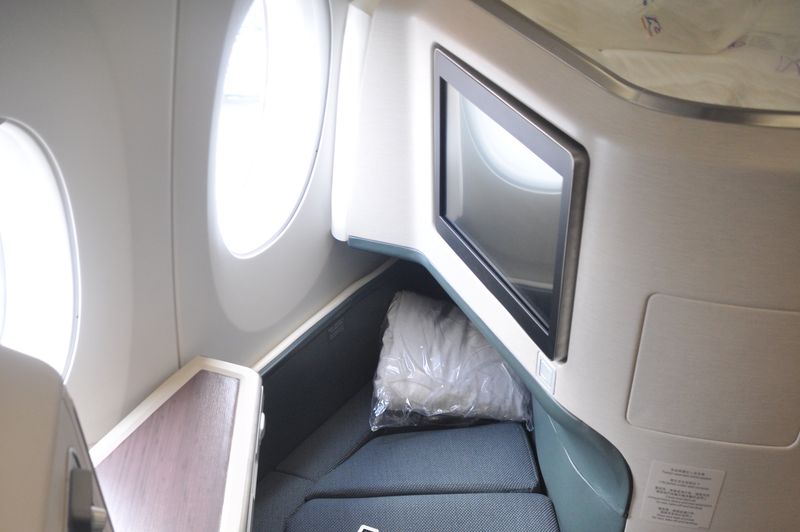 Also the new Premium Economy is impressive, mostly due to its very generous seat pitch of 40'' (101.6cm). And of course the Business cabin: 30 seats in an outward-facing herringbone layout, in a 1-2-1 configuration, are installed in the forward cabin, just eight more in the small compartment behind galleys and toilets.

In Business, Cathay bases its product closely on the offerings in the Boeing 777-300ER. For the first time on the A350, there is a consistent design throughout the whole cabin for which Cathay enlisted the support of Porsche Design.

For the A350, the Business product has been enhanced, working with the Cirrus III seat base manufactured by Zodiac. Principally, more stowage was added. A practical and spacious storage compartment on floor level, aside the seat, in which a laptop can be put for example, as well as a water bottle holder on the inside of the retractable armrest. 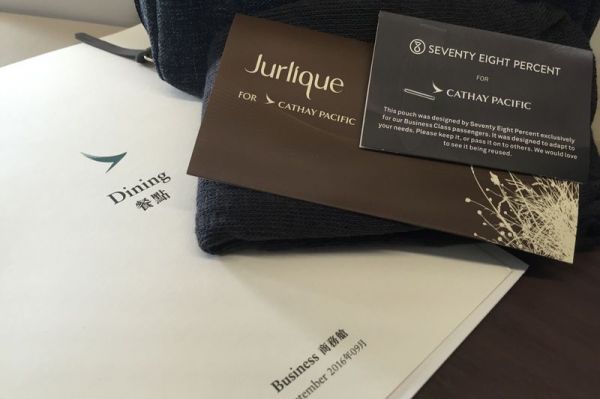 The storage compartment becomes part of the bed-space as soon as the seat is fully reclined, thus making the knee-room and the bed width superb. The bed length of 190cm hasn't changed vs. the 777, but thanks to amplefoot space, even as a 1.88-metre frame like me one has no space problems, neither in length nor in width.

This despite the fact that the seat itself is almost an inch narrower in the A350, though the bed becomes wider thanks to the adjacent extra area on top of the storage. Even more so when the aisle-side armrest is lowered.

The seat pitch is supposed to be two inches more than in the 777, now at 45'' (114.3cm). Even shoes size 46 (13 in the US) can now easily be stored under the ottoman at the other end of the seat, as before they wouldn't fit in the shoe cupboard provided. An improved cupboard, now boasting red leather inside, is to be found at shoulder level, not far from the seat control panel.

Inside dangle the first-rate, noise-supressing headphones, also there is a harness behind the door, ideal to store glasses or a smartphone. Almost nobody would guess that still behind the headphones there is the power supply to charge any gadgets. 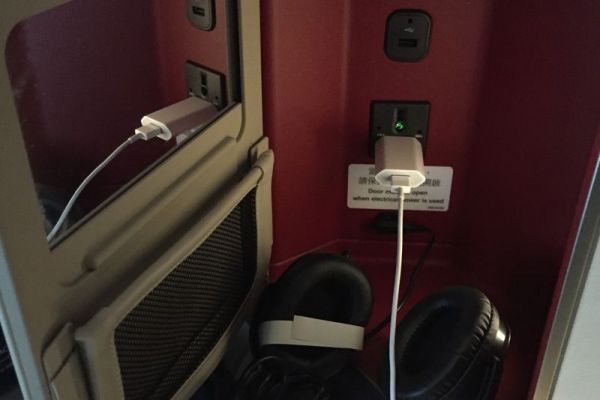 On the middle seats, the open doors of the cupboards double up as improvised dividers to the neighbouring seat. Overall, Cathay's Business Class cabin provides a high level of privacy, a privacy shell is shielding each seat from the aisle, the appearance is by any means elegant. I am sitting on 21K, in the last row of Business Class at the window on the right side in flight direction, a superb seat in this almost private aft cabin compartment.

A quantum leap is the new Studio CX IFE system - with a screen now grown to 18.5'' (47cm) in size, showing crystal-clear pictures. Until take-off I am not able, however, to bring the live-feed of the tail and front-wheel camera to the main screen. I am watching it instead on the smartphone-like remote control that I have taken from its console.

The IFE is very much used like a tablet, but it still takes some time to get familiar with it, some things still don't work as I'd like them to hours later. One of the highlights now is live TV: BBC World, CNN and Euronews are supposed to be available from gate to gate, I however often only receive visual feed and no audio. 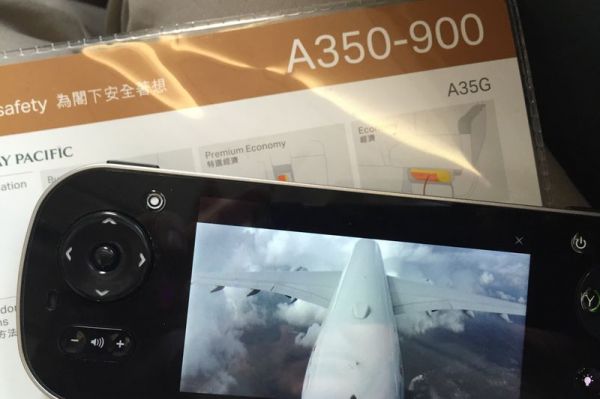 Besides a new news function with constantly updated texts, there is a new e-Reader, offering about 35 digital magazines in English and Chinese. As the screen is fairly far away I find a bit bothersome to flip through the magazines, even though one can enlarge the print size. I enjoy much more to grab a printed copy of Monocle from a rack, I think the trend to provide only digitalized print media on board, favoured by some airlines, is not in the customer interest.

A winner is the interactive 3D map, enabling passengers to follow the flight path from a variety of perspectives, even offering zoom-ins into individual streets of cities overflown, or a view from the cockpit including important flight parameters.

Equally perfect is the functioning of the wifi, for US$19.95 I buy a flat rate for the whole flight, access is swift and flawless on my smartphone. The price is fair, compared to other airline's expensive data packages. Internet access is available upwards of 10,000 ft of altitude, soon there is supposed to be also mobile roaming for text messages, which then will be active only from 20,000 ft for whatever reason.

While Cathay Pacific scores on its A350 premiere with its hardware, the crew and their service fall well short of expectations. It might have been due to the new aircraft, the unexpected and unexplained delay, in any case not much remains of the usual casual friendliness and superb efficiency. At first it takes 48 minutes until drinks are offered for the first time since take-off. This is much too late for a flight into the night. 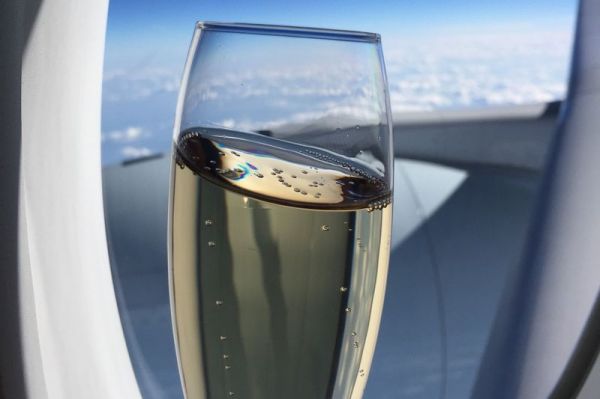 My request for a glass of champagne (Billecart-Salmon Brut) is answered with a glass of stale bubbly, from a bottle opened long before take-off. I show the missing bubbles and ask for a replacement. It's coming, but served almost mute, no apology or explanation. Lunch, says the menu, will be "served shortly after take-off." Today that unfortunately means one hour and 56 minutes of waiting, after an already much-delayed rotation. 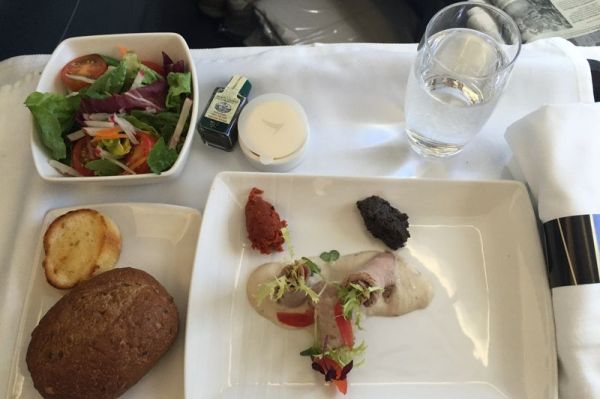 For starters there is no choice, everybody being served vitello tonnato and salad. The four main courses are displayed on a trolley, and I like to make my choice while looking at the food. The Business seats in the A350, however, geared towards privacy, make it difficult to even take a thorough glimpse on to the trolley in the aisle, it has to be moved back and forth for me to take a peek.

I go for stewed duck, it could have been also beef fillet, halibut or vegetarian pasta. It tastes OK, but by no means remarkable. The same goes for the cheese, chocolate mousse or apple crumble afterwards. Besides the regular wines, two reds and two whites, Cathay offers an organic wine on each flight, for which it has a special inserted page in the menu. There is only one organic wine loaded on each flight. 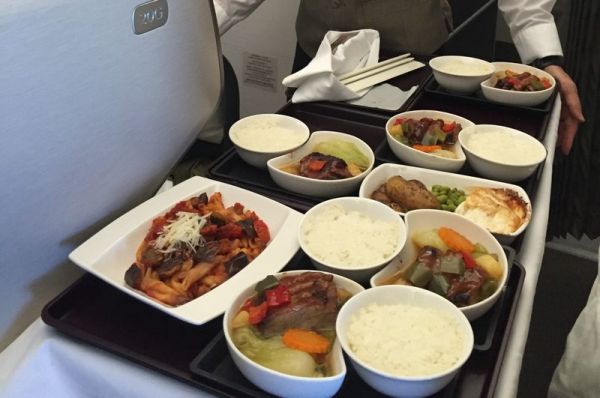 My question, which one it is today, brings distress to the flight attendant. It takes several explanations, pointing to the wine list and then waiting until it emerges that it is a Chilean red. On my return flight the same question is met with an equally puzzled reaction - why is Cathay not training its crews better for this, I wonder.

The rest of the flight I spend reading or sleeping, skipping breakfast almost entirely, which is served before midnight German time. While landing in Hong Kong after exactly ten hours and 45 minutes, I now watch on the main screen with feed changing between front and tail camera, what a show. A long haul flight in the A350, this is my second, is much more comfortable than in many other aircraft types, thanks to its minimal noise and better cabin air.

Cathay Pacific offers a superb product in all three classes in its new A350. Once the inflight service is on a normal level for Cathay, which really wasn't the case on my flight, the airline from Hong Kong is surely still among the world's top airlines.