BELGRADE - The former Yugoslavia played a long and proud role in aviation. A glimpse of that can still be seen in the aviation museum, one of Europe's biggest, opened in 1989, located at the entrance to Belgrade's Nikola Tesla airport.

Here, military aircraft made in Yugoslavia as well as Sikorsky helicopters built here under license can be inspected. But there are also plenty of memorabilia of once-proud airline JAT, founded in 1927, one of the world's oldest airlines. A JAT Caravelle is parked directly in front of the eccentric glass pavilion housing the museum.


Flight Report
Airline
Air Serbia
Aircraft Type
Airbus A319
Registration
YU-APD
Cabin
Business Class
Date
Oct. 5th 2016
Route
Belgrade - Berlin
Flight
YU354
It's worth to stop here if there is enough time before departure. After the breakup of Yugoslavia and the war in the late 1990s, JAT in 2003 remained the national airline of just Serbia and Montenegro. Ten years of infirmity followed, the airline was perceived as almost dead.

Then came Etihad in 2013 as the white knight and took over 49% of the shares. Since October 26, 2013, the airline flies under the new name Air Serbia.

Almost overnight a new company was created, fitted out with a new fleet and new brand image. The logo of a stylized, double-headed eagle, relying on the Serbian coat of arms, was found online by the CEO, being the work of a 25-year-old graphic design student. 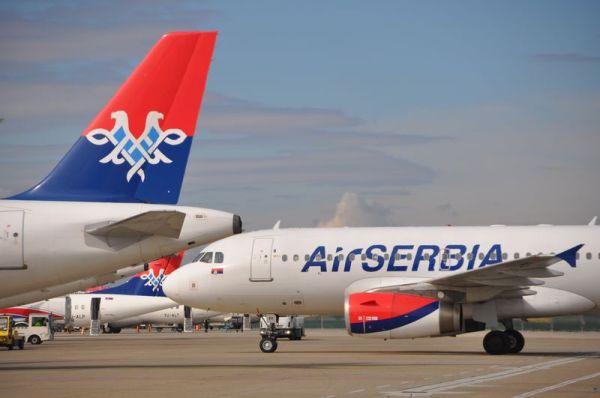 The concept for the on-board product and the uniform design was created by Etihad experts in Abu Dhabi within only six weeks. Today, three years later, Air Serbia is a real success story, the airline is profitable and delivers a first-rate product.

I am taking the evening flight at 18.00 to Berlin Tegel airport and arrive at the compact terminal a little over an hour early. This airport with roughly five million passengers has been visibly modernized recently, but distances and wait times are short, even now at a peak hour. Security is de-central in Belgrade, for every pair of gates there is one separate checkpoint.

Meaning that right after the speedy passport control one ends up in the duty free shop, offering also a wide variety of high-quality Serbian specialties, brandies for example. And from here it's not far to the Air Serbia Premium lounge. 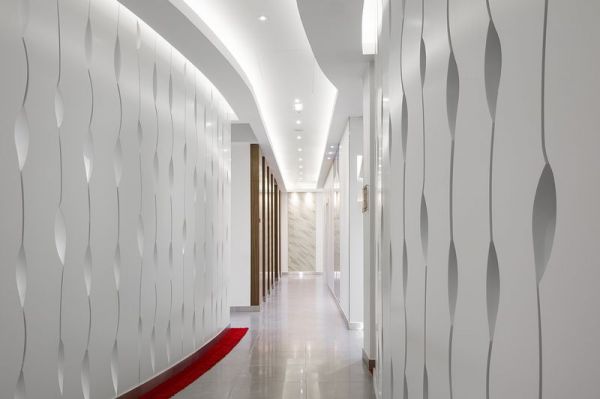 It was opened in September 2015 as a very visible sign of progress and received over 23,000 guests since. The lounge concept clearly shows Etihad's philosophy, from a prayer room to a waitress bringing drinks from the bar or food from the buffet if ordered. Unfortunately the lounge does not have windows, but the dominantly white interior gives it an elegant, airy atmosphere.

The buffet offers salads, sandwiches and some sweat treats in the late afternoon, while the barkeeper offers a wide variety of drinks. The same can't be said for reading material, at least not for international guests. Air Serbia, however, does make the effort of printing out copies of the day's edition of the International New York Times, a very much sought-after read of frequent fliers.

I am personally asked to proceed to my relatively far-away gate 25 minutes before take-off time, as there is still security to pass through. I get through it swiftly, the flight to Berlin is fairly full, almost booked out. In Business Class, however, I'm the only passenger. 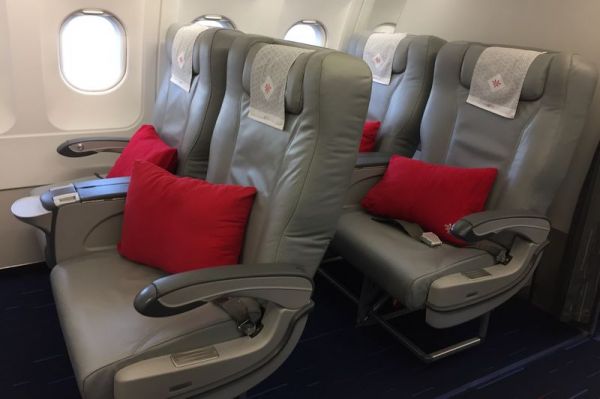 The forward cabin consists of wide, grey leather seats in a 2-2 configuration, nowhere to be seen on European flights otherwise. With a pitch of 38 inches (96.5cm) they are not only offering ample foot space, especially in the second row, there is also a generous recline of the seatback.

As soon as I have taken my seat 2A, the very friendly flight attendant asks what I would like to drink before take-off and if I might want some champagne. Of course I might. That's when she uncorks a 0.375-litre bottle of Mumm Cordon Rouge just for me and pours it into a glass at my seat. Very stylish. Almost like a trip back in time, to the era when premium really meant premium, even on short flights.

And I can't stop marvelling at this offering. A seat up front, one way to Berlin costs 543 Euros (an example for November 2016), a bit more than double that of an Economy ticket (which is 203 Euros on the same flight). But for that extra, you getamenities that one otherwise finds only at good airlines on long haul flights. And this flight to Berlin just takes one and a half hours. 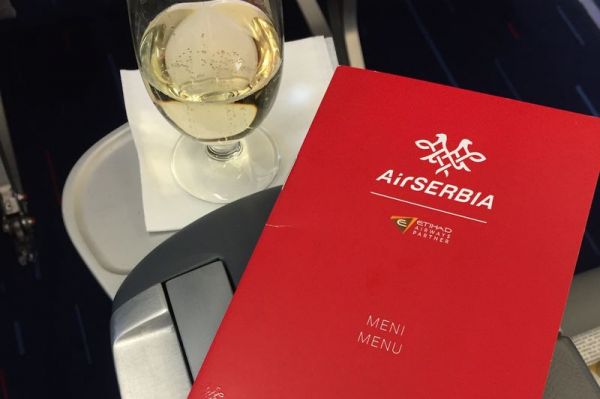 A printed menu is handed out, with two hot main courses to chose from, and an extremely impressive assortment of alcoholic drinks: Champagne, two beers, four different Serbian wines from the Podrum Radovanoviç vineyard, as well as Bourbon, Scotch, Vodka and Gin plus five kinds of the world famous Serbian fruit brandy, where Air Serbia partners with the popular Rakia Bar in Belgrade.

And if that isn't enough yet, there is also inflight-wifi, provided for a charge by Panasonic, plus "Elevate Play", the free IFE. Its content is available via streaming on your own device, but to enjoy it you have to download the app for it before the flight. 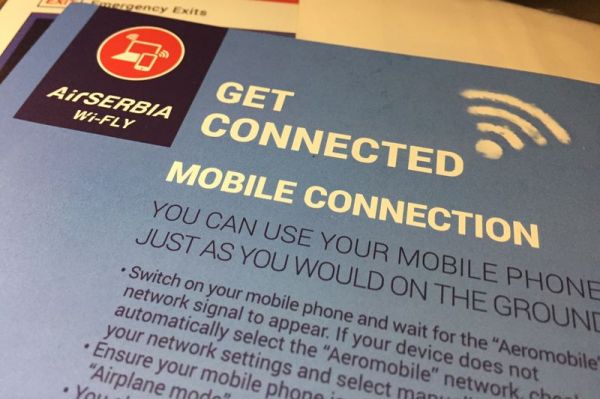 Then there are over 20 (older) box office movies as well as TV programs, plus dozens of recent audio CDs. I let go of it for this short flight. It is astonishing that with the exception of two destinations (New York, served new with the single A330, plus Abu Dhabi, with A319 or A320) no Air Serbia flight takes longer than two hours.

For that, this offering is a bit overwhelming. And it doesn't matter that much that tonight the newspapers offered on board are all in Serbian language only.

At 17.53, the doors are shut, it is obvious that Air Serbia takes punctuality seriously. Already at 18.06 we are in the air. Shortly afterwards the flight attendant brings me a fresh glass of champagne - and heated nuts in a porcelain bowl! Even on long haul flights in Business Class many airlines like Lufthansa today just hand out little plastic bags with nuts. 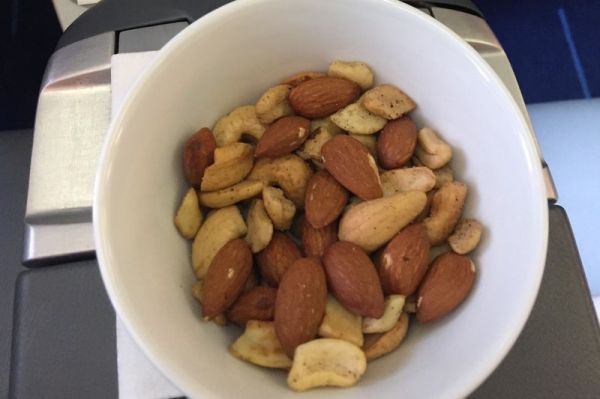 I request to put my meal on hold for a little while, no problem. The two ladies in the galley, however, are a bit underutilized today and really want to shine, they ask about every five minutes for any orders I might have, which makes it a bit stressful as the only guest. Finally I request for my meal, which arrives promptly.

I have chosen the steak with green pepper sauce, the alternative would have been fish, sea bream fillet in cape sauce. As a starter there is a Greek salad, the steak is delicious, the carrots and potatoes coming with it have no taste, however. I have a very good 2014 Chardonnay Classique with it, and as the flight attendant insists I also try a red, the 2013 Cabernet Sauvignon, superb as well. 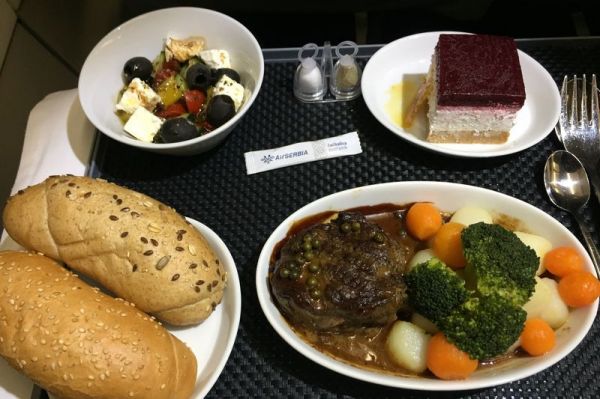 I pledge to make a visit to the Serbian wine country the next time. "We do this here to promote Serbia", explains the flight attendant, smiling. That's obvious.

Now I want to tackle desert, a very nicely done piece of cherry cheesecake. With it, I get offered brandy, I have to choose between plum, quince, apricot, pear and plum brandy with honey. Her favourite is quince, says the flight attendant, I have to taste it, she insists, of course the kind her fathers distils at home would be much better even and she could bring me a sip next time.

She really says this, and it comes across very caring and sympathetic. I prefer apricot, she insists on quince, so we agree on a compromise: A half glass of each. It is served in stylish, modern glasses of Rakia Bar. Both brandies are as superb as expected. 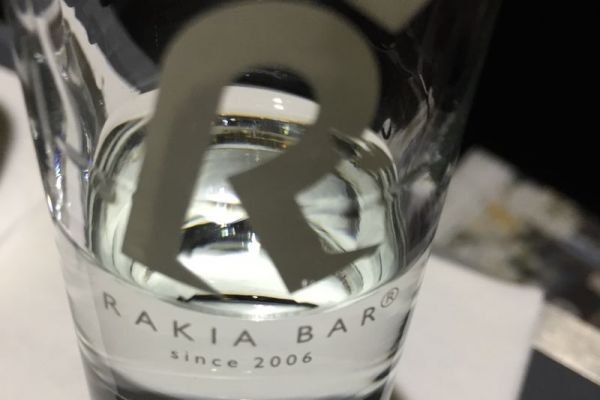 But then I reject every other attempt to let me try anymore, because I don't intend to fall off the gangway at Tegel after all, as I still have to travel onwards.  Luckily not driving myself, but by train. After one hour and 29 minutes we land ahead of schedule, and I am happy to get down the stairs without swaying.

Air Serbia sets a benchmark of what is possible in Business Class even on short haul routes. I don't know anything coming close anywhere in the world. It is obvious how eager Air Serbia is to present itself and its home country on the world stage, and it succeeds convincingly.

Hopefully it can sustain this level. Oman Air also impressed at first as "boutique" airline, of which only parts remain today.