Flight Report Air Canada
Airline
Air Canada
Aircraft Type
Boeing 777-200LR
Cabin
Business Class
Date
Oct. 22nd 2016
Route
Frankfurt - Toronto
Flight
AC873
Air Canada, however, impresses in that it retrofitted the newest "Executive Pod" concept, similar to the new 787 aircraft, on all 777s used on European routes already. Other airlines need years for such updates. There is a world of difference between the old and the new product, witnessed by those who fly on Air Canada's A330 to Montréal. It still has the old "Classic Pods" on board, with feet pointing towards the aisle, forcing passengers on window seats to do acrobatic exercises just to be able to look out.

With so many of its own departures, Air Canada runs its own, spacious "Maple Leaf Lounge" in Frankfurt's Terminal B. Granting the great advantage to Air Canada's Business customers to enjoy a much more exclusive waiting area than those of other Star Alliance carriers, which simply use the existing Lufthansa lounges. Which due to their sheer size and hustle and bustle don't appear to be very exclusive. 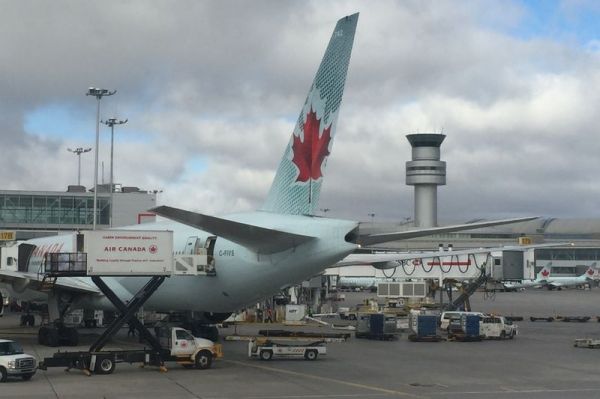 In its ambience with wood panels on the walls and glass artwork under mood lighting, the Air Canada lounge is one of the most impressive in Frankfurt. Especially the individual separées with elegant chaise longues are a big plus.

Boarding in Frankfurt for the morning flight to Toronto is swift, there is however no visible priority boarding lane. The position labelled as "Priority" is already closed while boarding is still in progress. After entering the cabin through door 1L, an array of German and Canadian newspapers is laid out. Very welcome, as many airlines push only digital reading material and just offer some token papers close to take off. 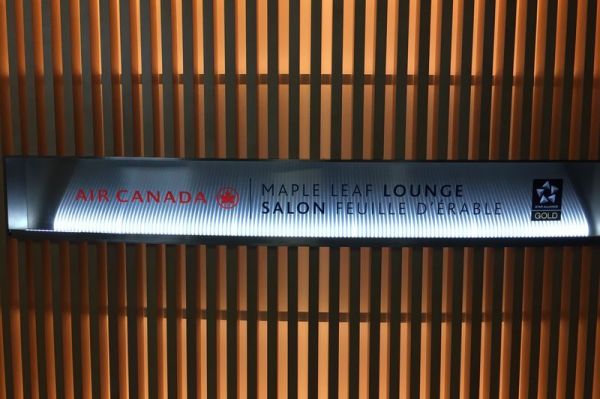 The new "Executive Pod" product in Air Canada's international Business Class is a radical turn away from the former "Classic Pod" concept of 2008 and real quantum leap for customers. The new seats, based on B/E Aerospace's Diamond Seat, were introduced two years ago, when the first 787s were delivered to Air Canada.

And since, they have been installed on most of the carrier's 777s, at least on all Triple Sevens flying to Europe. And thanks to the wider fuselage, the identical 1-2-1 configuration appears to be even much more roomy on the 777 than on the 787. I am seated on 7A, the left window in the last row of Business in the forward cabin. 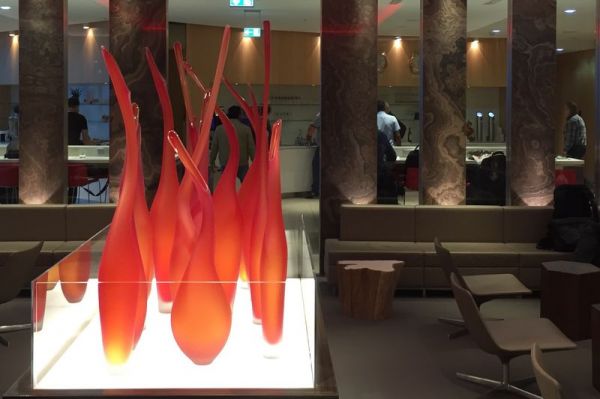 In total, the Boeing 777-200LR offers 40 seats in Business Class, seven rows in the front and three in the aft compartment. The 777-200LR is a special version of the 777 of which only 56 have been built, boasting an ultra long haul range of almost 16,000 kilometres. Air Canada had bought eight of these for Transpacific nonstop routes, but serves so few of them that the aircraft today are also deployed on much shorter Transatlantic routes.

At my seat awaits a water bottle, the handy compartment underneath the window, containing headphones, power outlets as well as the handset for IFE is opened. I like that, as with other seats, one often has to thoroughly search to find the plug-ins for power or headphones. 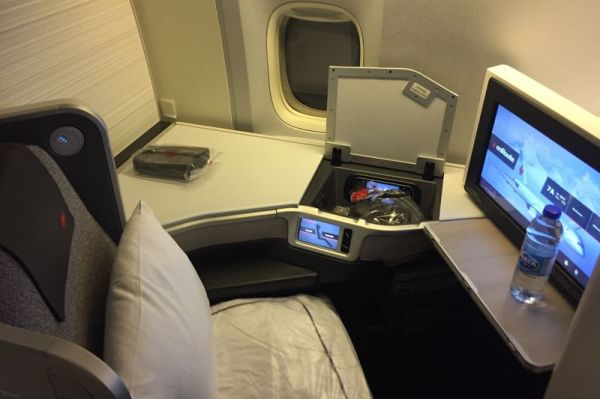 A very simple display outside of the compartment is used to adjust the seat settings, very user-friendly, as equally basic. But I am still missing a printed instruction for the seat. The website praises a pneumatic function, to adjust the firmness of seat cushion and headrest and containing a massage function, but I didn't find out about it until after the flight. Strangely enough, on Air Canada's old "Classic Pod" there is an instruction card available, though the seat functions are much simpler.

Thanks to my seat being located in the last row at the window, there is another flat stowage area to the left. Combined with the open storage rack towards the aisle, in front of the retractable armrest, this provides a lot of opportunities to keep things from water bottles to laptop or work papers safely nearby. The screen measuring 45.7cm in diagonal is supposedly the biggest of any airline from North America, advertises Air Canada. 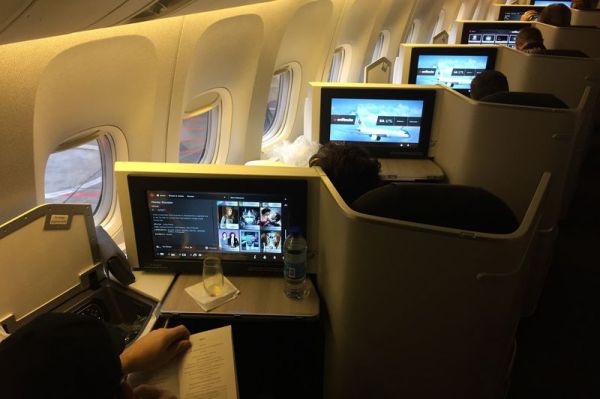 The interactive flight map offers some nice functions such as a display of cockpit instruments, no zoom-in however as in other modern systems. A painful miss is wifi, not yet offered by Air Canada on any long haul aircraft, but only in the short haul fleet with ground-based communications. "Soon available" promises the brochure on board, in long haul connectivity Air Canada is truly behind.

Flight AC873 is very punctual this morning for Frankfurt standard, almost to the minute at the scheduled departure time of 9.20am the aircraft is pushed away from the gate, rotation already at 9.38. Shortly after I start to work on my laptop. It is a challenge to extend the two-piece table from underneath the screen, as there is no how-to description given. One has to squeeze a handle underneath and then pull on it, and even then the table is slightly stuck. 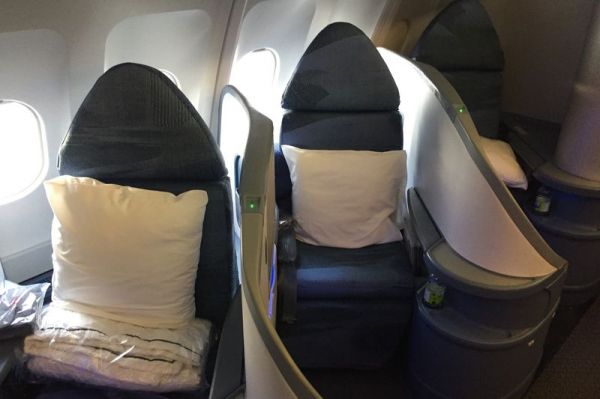 Air Canada Business Class (Classic Pods in A330 / 767), © Andreas Spaeth
On Transatlantic flights with a morning departure time I am often disturbed by the fact that the airlines serve an opulent lunch at a time when I usually just have finished breakfast. On the United flight from Hamburg to Newark it happens that with a departure time around 9am, at 10am there's already a steak on the table.

Which traveller can genuinely want this, going against any natural pattern of eating tines, I ask myself. I find it almost bizarre that nearly all guests accept this kind of being fed and eat whenever food is served. Nowadays, however, good Business Class service is defined also through the "Dine Anytime" option, giving the passenger control over when to eat. 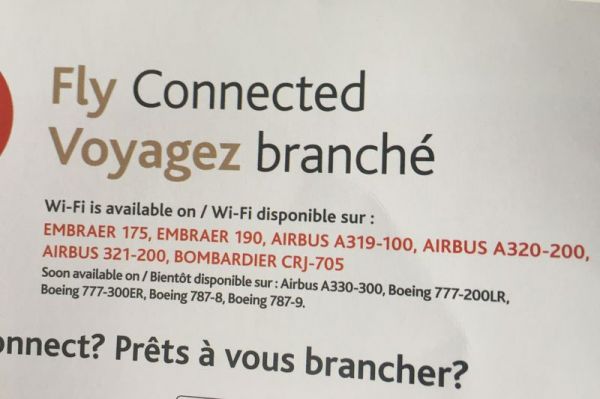 Some airlines still don't offer that, at others you realize that crews are not very willing to do it, as it naturally means more work for them. And this is the same with my Air Canada crew, although the menu clearly promotes a "Flexible All Inclusive Option". Initially the very forthcoming purser makes the rounds and notes who wants to eat what.

The passenger in front of me is the only other one I am aware of that also asks to be served at a later time. I do the same and the purser says: "No problem, we don't bother you again until you desire your meal, it'll then take half an hour before it is served." We had a deal. But this kind of arrangement doesn't seem to be communicated internally. As of course, the crew serves "lunch" at 10.30am, and I am asked twice by different cabin crew members if I wanted to eat now. 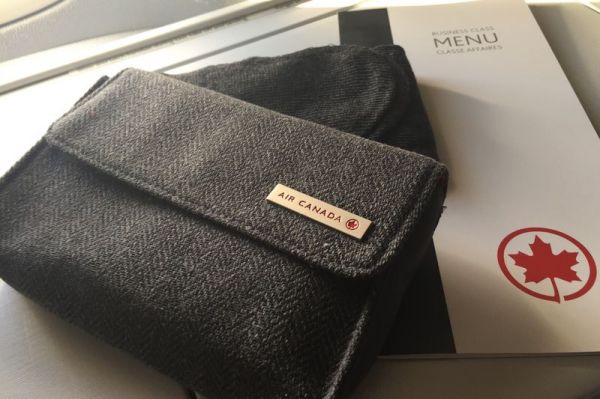 In contrast to other airlines, Air Canada is still serving its menus on trays. At main meal times, the different courses arrive one after the other, also fresh bread in between and drinks being topped up. I don't like it if, wanting to eat later, I instead get the tray with everything on it all at once. This doesn't appear tempting at all, forces you to eat the main course at once before it gets cold, there is no choice from a bread basket or from the beverage cart.

Why it takes half an hour to heat a main course is also a mystery to me, in any case, I feel fed and not decently served. Other airlines do this much better. And especially on a long day flight there would be time to leisurely enjoy an opulent meal. Here however, you are clearly served in a substandard way when you decide to rather follow your body's rhythm than to eat at the time when it's best for the crew. What they serve me would be good as a quick option, my desire is the opposite.

The food itself is OK, but in no way special or memorable. The appetizer (smoked salmon) is not even offered or served to me as a late eater. So I go straight to the main course, I had a choice of beef fillet, Asian chicken, pasta and a fish dish. The latter, Barramundi in a sauce wrongly labelled as "bouillabaisse" (this would in fact be a stew), proves to be an excellent choice, the fish is first-rate, it comes with barlay risotto and broccoli.

Besides a plate of fresh fruit, late eaters are also not given desert. I ask whether I can still order the ice cream from the menu, and the fairly unenthusiastic flight attendant says I would have to leave it to thaw for another half hour as she delivers it. On the plate are three smallish scoops of ice cream, chocolate, vanilla and pistachio, solidly frozen like cannonballs. After some time they taste good, but served in an uninspired way, no decoration, nothing. 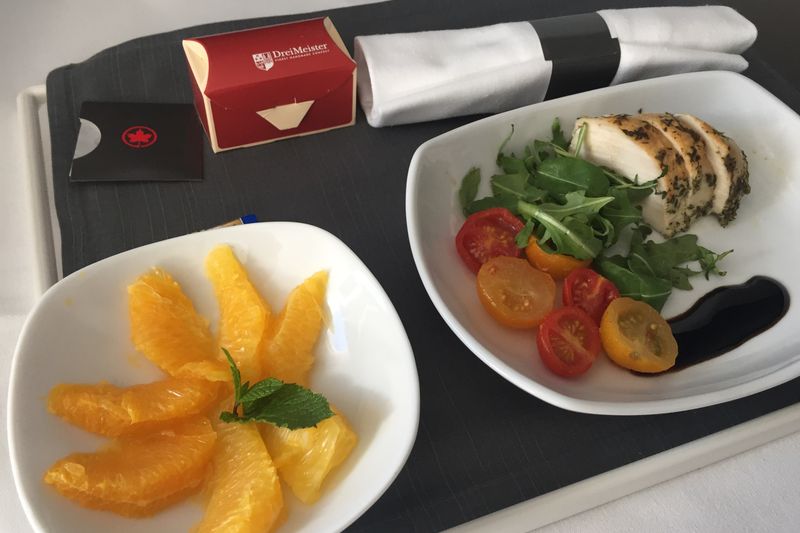 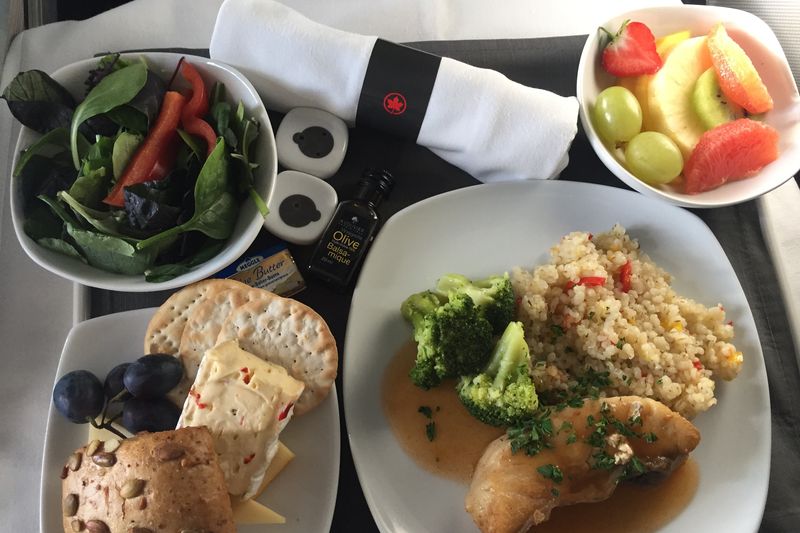 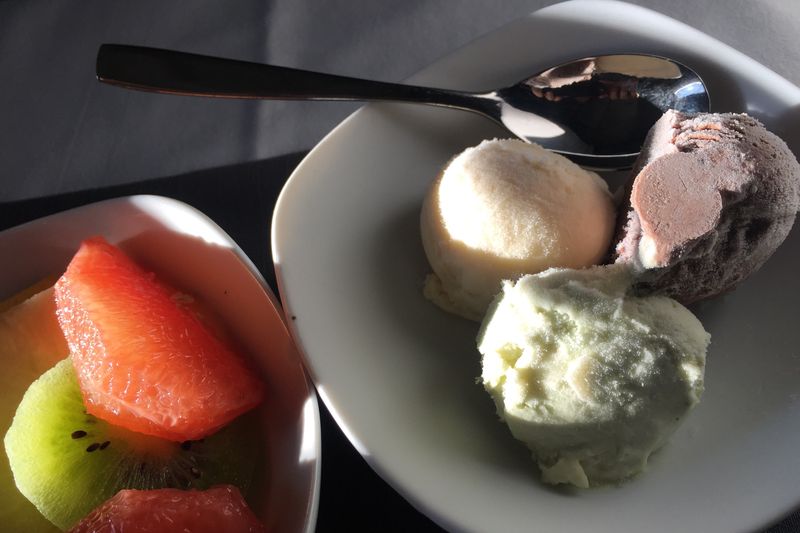 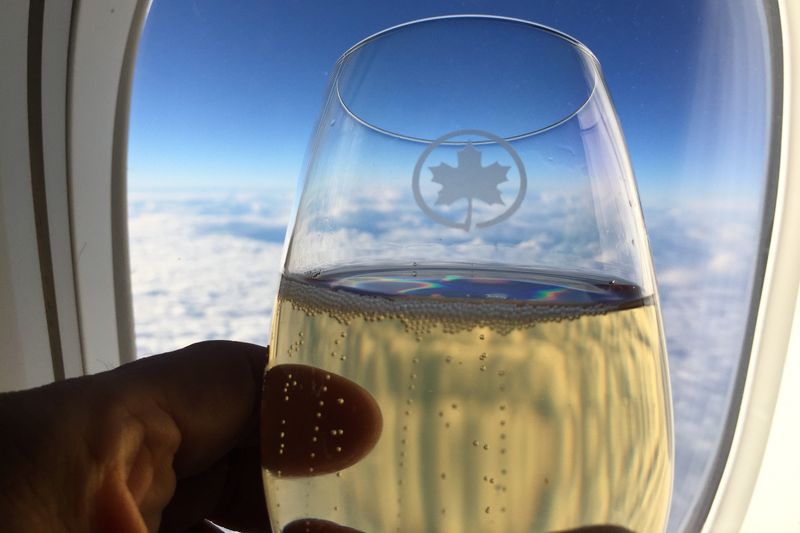 As far as drinks, the superb Drappier champagne competes with two white wines (the Spanish Verdejo pleases the palate) as well as three Reds, among them one from Canada. As a non-coffee drinker I don't try freshly made espresso or cappucchino, offered on 777s and 787, but it's said to be a highlight. The same can't be said later about the light meal before landing, cold lemon thyme chicken and orange segments, equally uninspired.

After lunch I sleep for a few hours, the seat converts to a 2.03 meter long and 53cm wide bed and offers plenty of room to lie down, also the foot space is ample, very comfortable. The IFE offers 150 films, many mass-market mainstream movies among them, 200 TV programs and 100 audio albums. In the Pop section there are 15 albums, in Rock 18, including many artists lesser known outside Canada.

Nothing serious, but not impressive either.After exactly eight hours and 15 minutes, we land almost on time shortly before noon local time in Toronto.

Air Canada has made a quantum leap forward with its new Business Class cabin in the Boeing 777s and 787s. The hardware is top-notch. The only minus is the (currently still) missing wifi. There is potential for improvement, however, with meals and service patterns. Because of the mixed offerings from Europe with old and new products, one has to thoroughly check when booking what one gets, the website states this clearly.