MONTRÉAL - Nothing about flight BT9801 is ordinary. Including its scheduled departure time of 2am EST from Montréal this Tuesday night. On board the delivery flight for Air Baltic of the first Bombardier CS300 from Montréal to Stockholm.

Half an hour past midnight, the complement of 18 souls flying over the Atlantic on the first stretched C Series model, following the handover ceremony on Monday, gathers at the Delivery Centre in Bombardier's Mirabel plant. The aircraft tonight is the first Bombardier C Series CS300, the longer version, MSN 55003 now registered YL-CSA, which has already been test flown for about 20 hours. 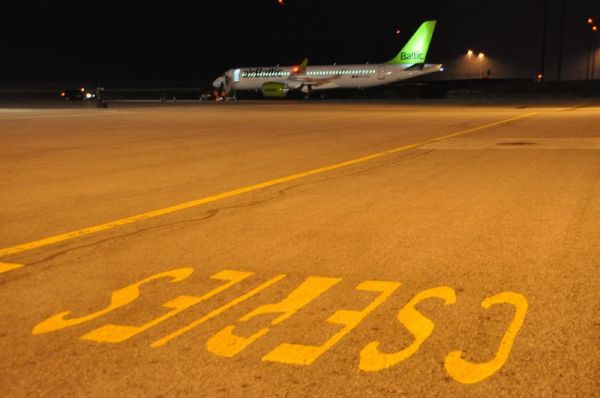 At 2.23am, the aircraft is now officially operated by Air Baltic, after some last minute issues are solved, and SVP Flight Operations Pauls Calitis holds a short briefing. "Six of the 18 souls on board tonight are pilots, three of ours and three from Bombardier", he announces, "and we will take turns in the cockpit."

Flight time to Stockholm's Arlanda airport is estimated to be six hours and 40 minutes, with the route being slightly longer, as the C Series is not yet certified for ETOPS operations.At about 3.30am, the fliers are simply walking out onto the pitch dark tarmac and after a lengthy stroll in temperatures slightly below freezing, they reach their aircraft, parked outside after some last-minute engine-run ups. 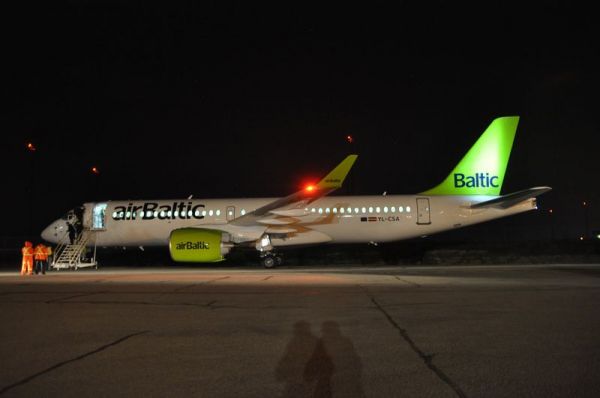 The cabin is lit up in Air Baltic's corporate colour green, which makes a very impressive first sight on entering from the darkness outside. It also instantly showcases the impact of the mood-lighting system this aircraft is equipped with. And underscores the fact that the C Series is a serious airliner along the lines of Airbus or Boeing types, as even the cabin appearance very much resembles their latest long haul jets A350 and 787.

Air Baltic is the first airline ordering mood-lighting on the C Series. The much bigger windows and high ceiling contribute to a wide-body feeling, though of course the C Series is a single-aisle aircraft with 2+3 seating. 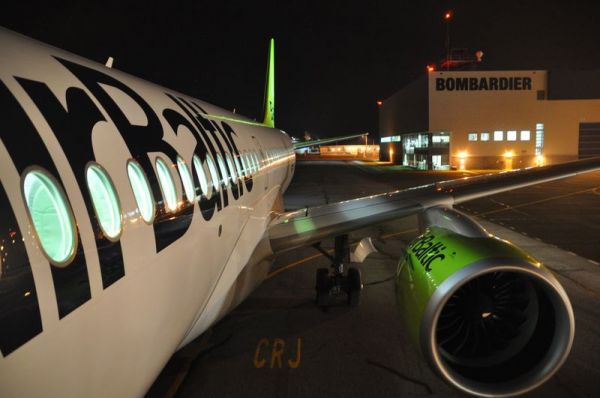 Air Baltic has equipped its cabin with 145 "SlimPlus" seats manufactured by Zodiac, clad in leather of a light grey, almost whitish colour, that might be prone to look stained easily after some time of heavy-duty utilization. In any case as pristine as they are now, they look very stylish.

Despite the pitch being 30'' (76.2cm), the seats feel very roomy, thanks to their slim architecture. The middle seats on the right side of the cabin are even wider at 19'', all other seats boast a generous width of 18.5'', while an A320 usually offers 17'' seat width. 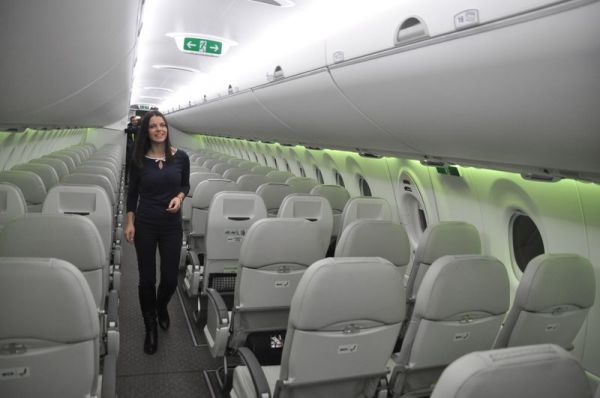 Air Baltic's seats allow a considerable recline, with the whole seat pan moving forward and upwards, minimizing the impact for the passenger sitting behind. This seems to be a win-win and huge advantage over the dreaded "pre-reclined" seats with fixed seatbacks that many low cost carriers use and which seeps now into network carrier's cabins like currently at TAP Air Portugal and some Air France Airbus aircraft.

Air Baltic has opted not to use different seating for Business Class, which Bombardier proposes in a 2+2 layout with 36'' pitch, but rather has stitched "Seat not to be occupied" writings into the seat covers in the first three rows, on the aisle seat of the left and the middle seats on the right side, keeping these seats always free. The curtain that will divide both cabins hadn't been installed yet. 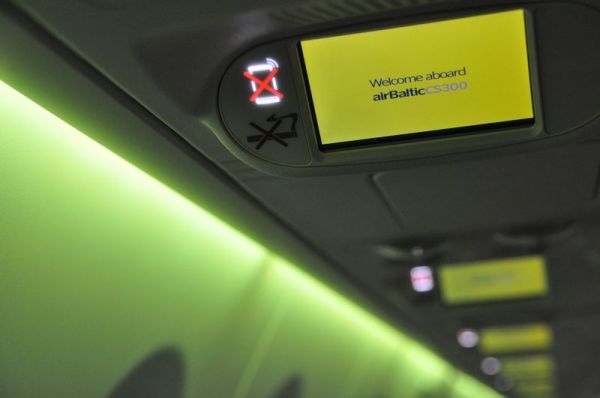 This is a no-fuss flight with no seat assignments or boarding passes, not mentioning the lack of any security checks or passport control before boarding. Instead, the 16 people riding in the cabin are asked to congregate aft of the wings just for take-off, to spread the weight more evenly in the largely empty cabin.

In some rows luggage occupies the space in front of seats, while the single over-wing exit row is blocked on both sides with boxes of catering for the flight. After doors are closed, a seemingly endless time passes without any action, while in the cockpit, Pauls Calitis and one of the three Bombardier pilots, sent to Riga to help with the introduction of the aircraft into service, are doing extensive pre-flight checks. 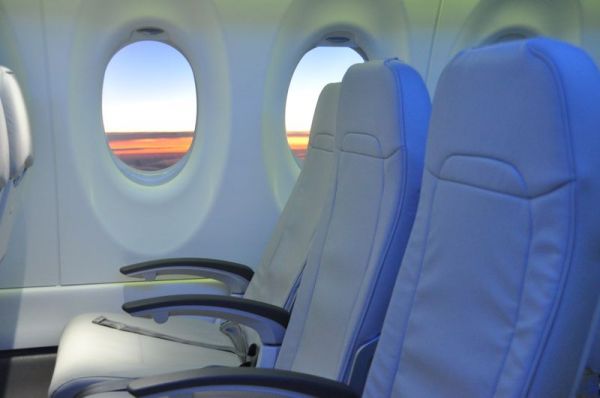 At 3:57 EST, the engines finally come to life, which is audible only very subdued in the cabin. "We don't have the same problems with the new Geared Turbofan engines as Airbus A320neo operators complain about, as they use the different PW1100G and we the PW1500G", explains Gerhard Ramcke. The captain from Hamburg, Germany, works for Air Baltic since twelve years and is the Chief Pilot for the C Series.

Start-up, which can take minutes otherwise, is a pretty swift affair here as the engines were doing run-ups just before this flight. At 4:13 EST, over two hours late, it's wheels up for flight BT9801 bound for Stockholm. Takeoff weight today is 57 tons, ten tons short of the CS300's MTOW. 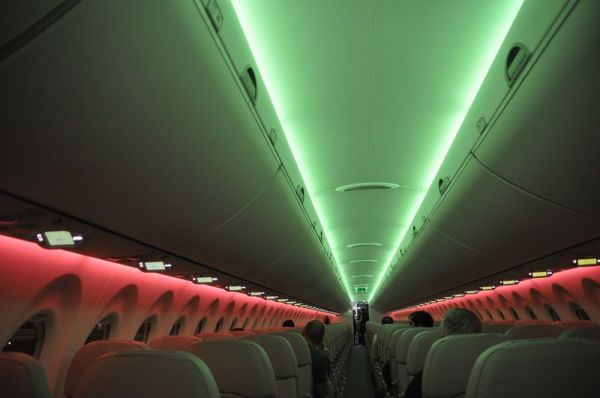 Once in the air, many passengers get ready to sleep. As the armrests of the three seat-rows are easily flipping upwards, these make surprisingly good makeshift beds. Only about two hours into the flight going East, over the coast of Newfoundland, the sun rises to the right of the aircraft.

The back of the cabin becomes the "sleeping compartment" with window blinds firmly shut, while the front sees the other passengers congregate around the forward galley or behind the pilots. Of course, the huge privilege of a delivery flight is the constantly open cockpit door. 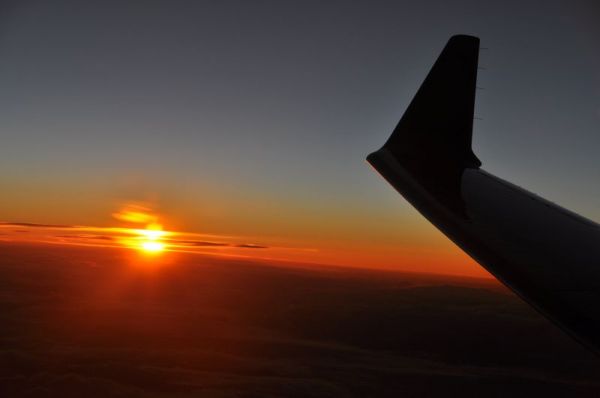 The route leads the aircraft to pass just to the south of the southern tip of Greenland. Snowy mountain peaks and deep fjords lie 41,000 feet below in pristine sunshine in an orange glow. After about three and a half hours of daylight, the sun sets again, while shortly after, the aircraft flies over Norway, coming into Stockholm Arlanda at 16:54 CET, after a flight time of exactly 6 hours, 40 minutes and 39 seconds. 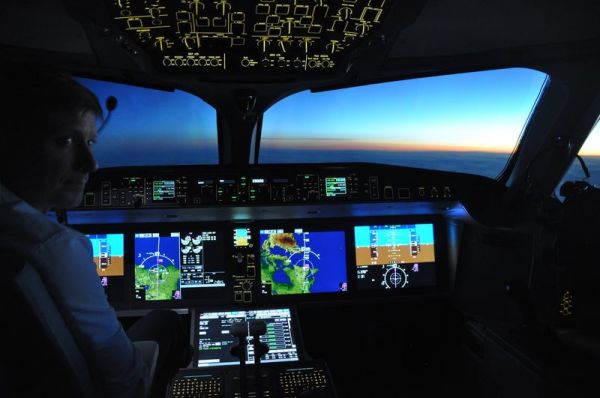 The CS300, such as the CS100 already in service with Swiss, has clearly proven why it will become a favourite with passengers and airlines.

It is even well suited for long-haul operations, while of course this won't be its mission. The 5,800 km from Montréal to Stockholm are well within the range of the CS300, even with a full load of passengers, Bombardier indicates its range as being 6,112 km (3,300 NM). 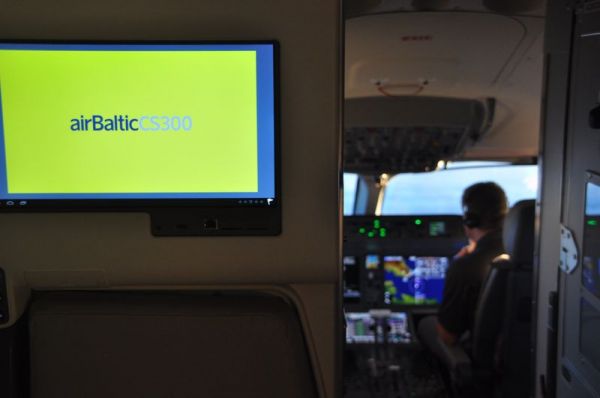 Air Baltic, however, will put it on short European hops, starting with Amsterdam as of December 14 for the first scheduled flight. Before, it will tour four important neighbouring markets on demos for invited guests, with stops planned in Tallinn, Vilnius, Helsinki and Hamburg.

The airline has already twelve pilots certified to fly the CS300, and it will receive the second aircraft of 20 ordered before the end of the year, putting it into service in January. On Wednesday morning, the aircraft did the last short hop to Riga, where it is received with a huge welcome party on December 1, with the President of Latvia in attendance.