ZURICH - It was an exciting year for Swiss, with two newcomers to the fleet of Lufthansa Group's affiliate in Switzerland: In January, the first Boeing 777 (of six today) arrived, July saw the world premier of Bombardier's C Series (four in service today).

At the same time, in the satellite terminal E of its base at Zurich's Kloten airport, Swiss opened a new lounge, supposed to be a benchmark for Lufthansa Group.


Flight Report Swiss
Airline
Swiss
Aircraft Type
Airbus A330-300
Registration
HB-JHG
Cabin
Business Class
Date
November 26, 2016
Route
Zurich - Montréal
Flight
LX86
PaxEx.com has reported on the first flight of the Boeing 777 to New York in February, but that was an inaugural flight under special circumstances. A routine scheduled flight with a well-established aircraft half a year later probably is more telling about the true product quality at Swiss.

On a grey November Saturday I am on my way from Hamburg via Zurich to Montréal, a route on which Swiss offers one of the best connections. The transfer at Kloten is seamless and swift. 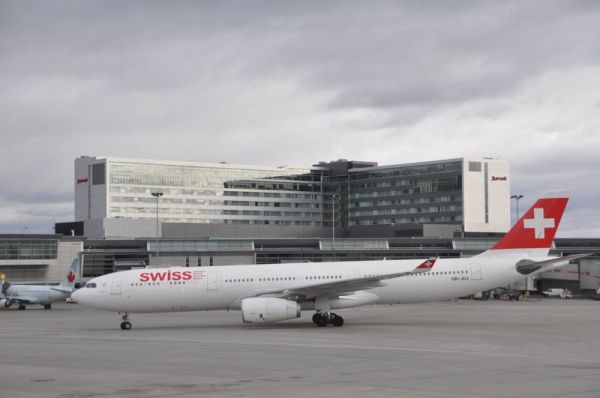 Presumably because of the off-peak travel season, there are no long queues at passport control and no pushing and shoving in the underground people mover, running from the main terminal to the satellite through a tunnel. In summer time and at the morning peak hour, this is much more crowded.

I am looking forward to the new Swiss lounge, which I had only seen once, before the official opening. Anyone carrying heavy cabin bags should take the elevator, using the stairs definitely makes you sweat. Once arrived upstairs, it instantly becomes clear how generous this lounge has been laid out.

It is difficult to decide for myself where to settle: At a long counter with stools and a view of the active runway, at one of the tables nearby, or in a separate room behind it with comfy chairs, or even in one of the ergonomic loungers in one of the quiet areas? Another choice would have been one of the small working compartments, where one can talk on the phone or work on a laptop undisturbed.

No choice today, unfortunately, is the superb outdoor terrace. It is neither cold, nor wet or windy, but still it says "closed today" on the door. Why, I ask myself. But then you get great views here everywhere, even from the sinks in the washrooms. One of the attractions of this lounge is the open front cooking, where fresh food is prepared and handed out at a counter. 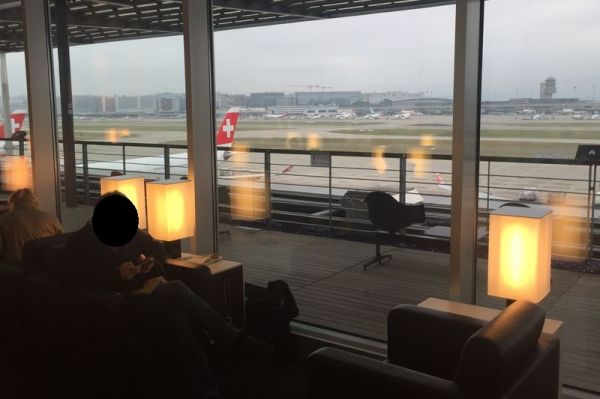 The menu on offer doesn't sound too tempting, comprising of chicken with risotto or spaghetti. I'm not hungry yet at this late morning hour, but it looks a bit like canteen food, some of it served from heated containers. But there is still also a buffet of cold dishes, ranging from buttered pretzels to fruit salads or desserts. All attractively presented. Surprisingly, this showcase for Swissness offers almost no Swiss wines.

I have to look thoroughly to discover a white one in the fridge. Even more strange and a real faux-pas in this ambience is the strange sparkling wine Swiss offers in its lounge. It's called "Chamderville Sec", and the label proclaiming "aromatized wine-based drink" doesn't bode well. A short research shows it is offered for €4.49 per bottle. A wine portal describes it as "watery nothing". I spare myself a sip.

Nobody insists on French champagne in a Business Class lounge, but why Swiss doesn't offer a solid Crémant or Sekt is hard to understand.

On the way to my gate I pass chaos, a United flight to Washington DC has been cancelled on short notice due to a technical problem. That makes you appreciate all the more when your own flight works with the precision of Swiss clockwork. Boarding is seamless, even though the flight is full. 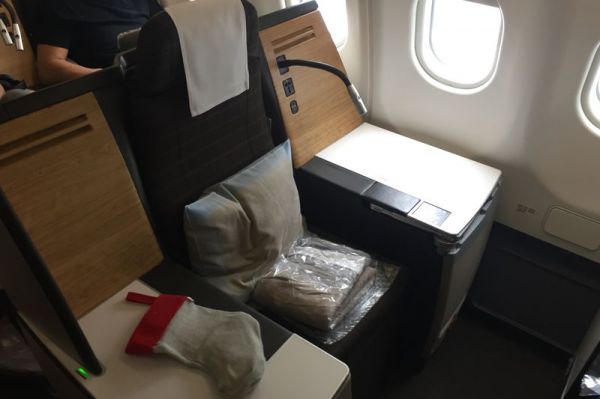 I was lucky and could secure myself one of the coveted "throne" seats online a few weeks before in the Swiss Business Class. There are just five among the 45 seats in Business on the A330, the A seat in every second row is such a throne, resting in between two wide armrests. More personal living space and privacy can only be found in First Class.

I am seated in 6A, in the first row of the aft, main Business cabin. The rows in this cabin layout, introduced in 2009, are alternating, configured either 1-2-1 or 2-2-1. Swiss's new 777, whose fuselage is ten centimetres wider in diameter, are still outfitted similarly, just with some refinements, thanks to the newest-generation of the same basic Thomson seat.

In short: Also the older product in the A330s, and especially the throne seats, is still among the best in the Lufthansa Group. Two things, however, are less desirable in the A330s, due to the permanent evolution of cabin interiors: The screens appear to be pretty small for today's standards and are a far cry from the generous 16'' diameter that 777 passengers now enjoy in Business. 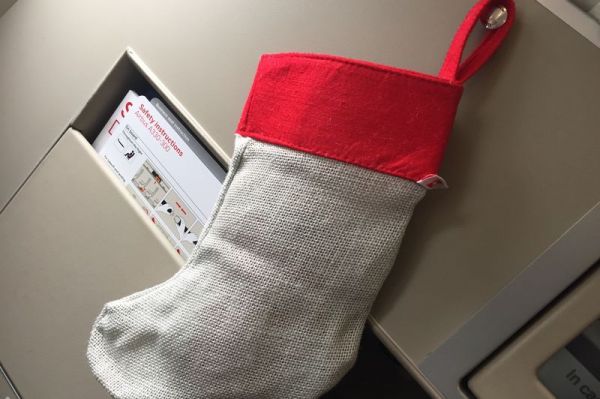 And the lack of wifi on board is a minus. Swiss has just equipped its first A330 with internet access, only starting in spring, the other 13 A330s in the fleet are following suit. At my seat a Christmas stocking is awaiting, made of raw linen with edges of red cloth, this is the Swiss amenity kit during the holiday season. Looks funny, but the linen leaves its mark with particles coming off easily, while the content is very modest. Not even a skin moisturizer, instead a recipe for baking Xmas cookies, which is of limited use while traveling.

Shortly before the doors are closed I bump into the captain and ask him about the expected flying time today. He confirms, like the last few days, a very short flight duration is calculated - just seven hours and 20 minutes. Meaning we will arrive about an hour prior to the scheduled arrival time, and I manage to rearrange my pickup time. 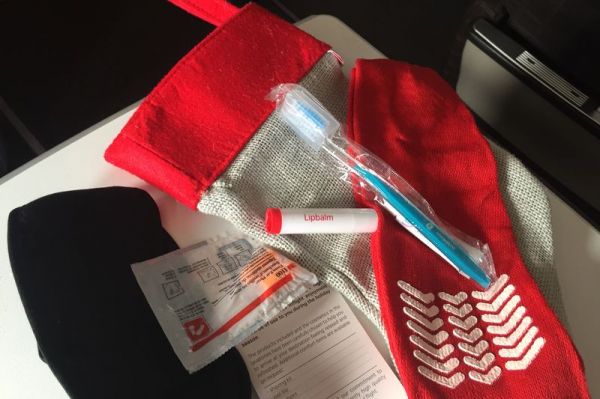 And in fact, all works out according to plan then. The crew serves French champagne, not just any bubbly, even before take-off, seemingly to make good on the lounge issue. Absolutely on time at 12.45pm, the aircraft is pushed from the gate, taking off a few minutes later. Shortly after, the first drinks service comes, the crew is friendly, some even charming, with the purser taking a few minutes for each passenger while making the rounds through the Business cabin.

A small advice: Heating up the little bowl of nuts would enhance the experience, instead of serving it cold. Already 56 minutes after wheels up the appetizer arrives on the table, nice and swift, but without rushing. 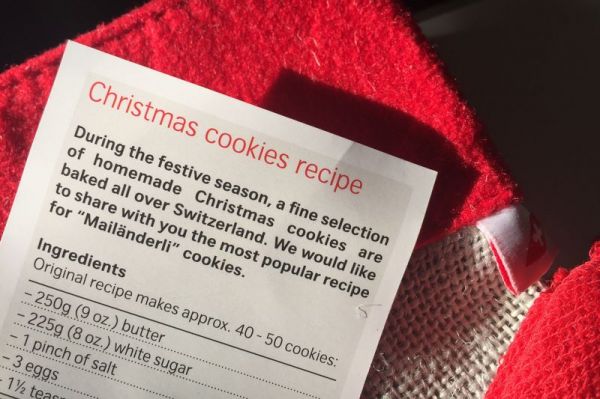 The menu options for the main course are opulent: Beef tenderloin with barley risotto, chicken with truffled polenta, pikeperch as well as Courgette with saffron sauce and wild rice. I opt for the fish, but first for the "air-dried venison and mushroom timabale, chioggia beetroot carpaccio and pickled walnuts". Sounds a bit exotic, and I had never heard of chioggia before.

But this is probably the best appetizer (with the rare exception of caviar) that I have ever been served on an aircraft in my long existence as a frequent flier. Beautiful to look at and unbelievably intense in taste, terrific! Taste of Switzerland, as the menus created by chefs from Swiss regions are called, definitely lives up to its name.

That makes me try the other first course as well: "Char mi-cuit with apple salsa and jelly, cucumber tapioca and black mustard." Not bad, but by far not as intense as the venison timbale. The pikeperch with champagne sauce is very satisfying, the sauerkraut wrapped in a leaf of savoy cabbage is quite original.

I drink the only Swiss white wine with it, of course, which is light and refreshing. It's part of the ritual at Swiss to serve the cheese on a black slate. And the plum and cinnamon mousse is a delightful dessert, rounded off with a Kirsch and some Swiss chocolates. My verdict: Full score for this menu. 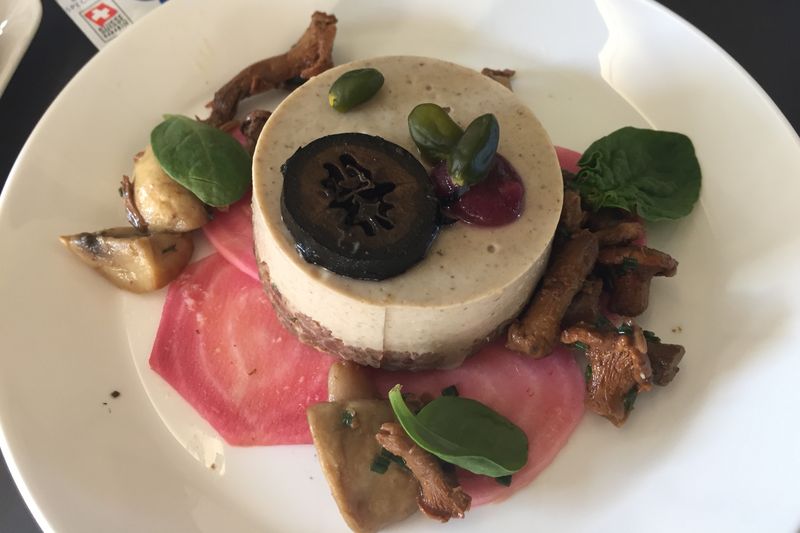 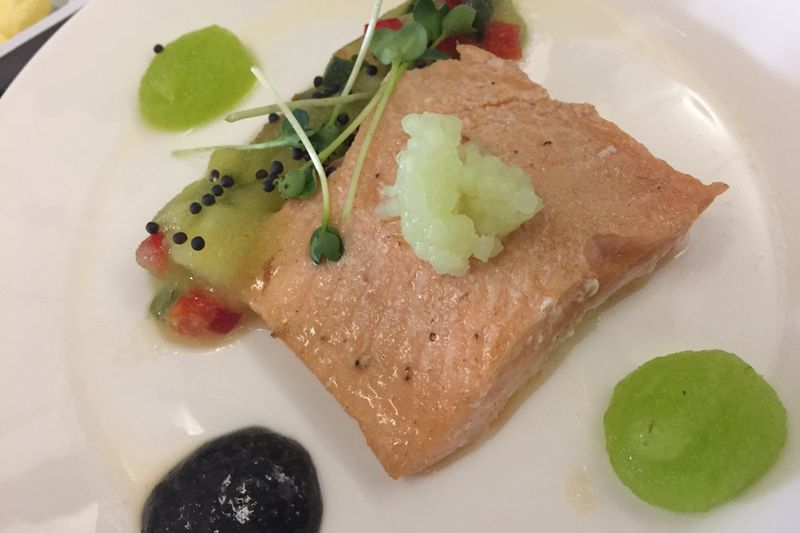 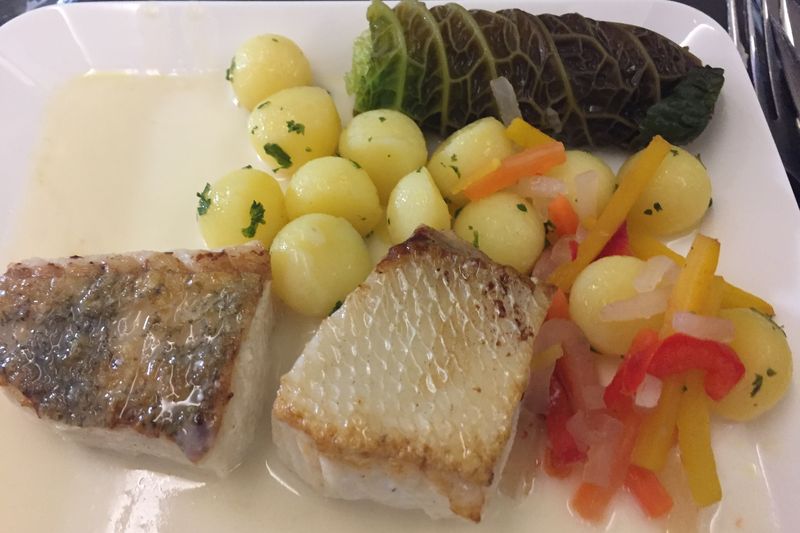 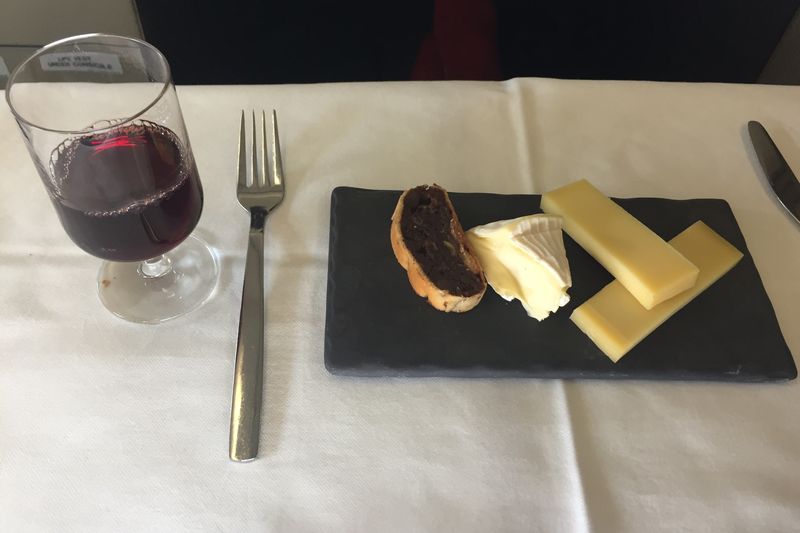 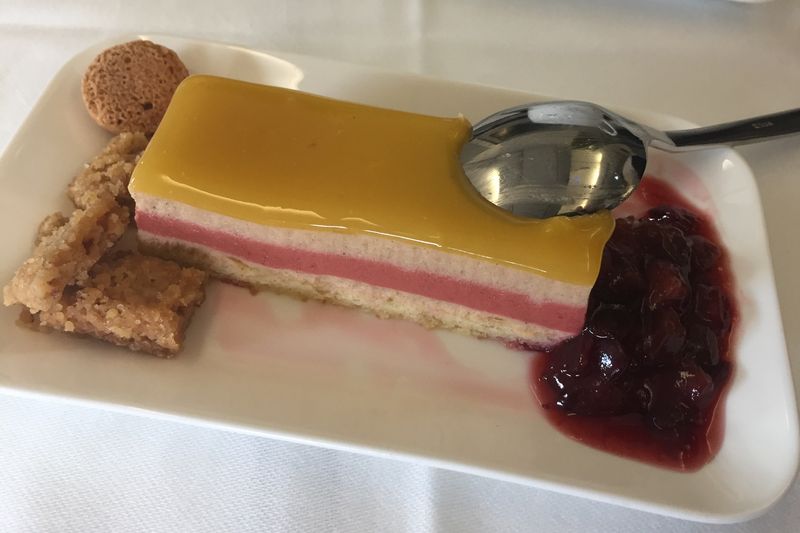 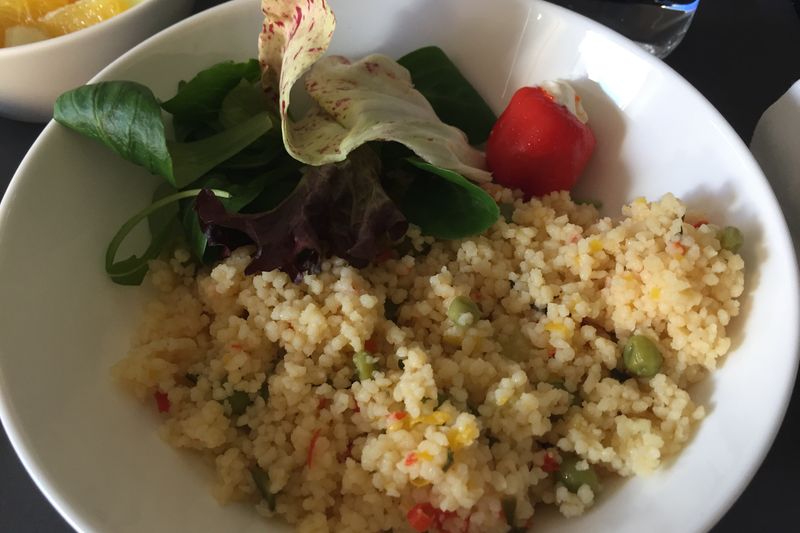 Now I get comfy on my seat, extending it into a flat bed. Obvious is the vast foot space while lying down, also above the feet, the total opposite of Lufthansa's Business Class. In between I'm listening in on some of the audio CDs in the IFE, the offerings with less than a dozen albums in each genre is not particularly generous.

I'm not watching any movies, as the screen is not too inviting. Before I know it, the crew serves the pre-landing snack. This often shows if an airline does an effort or just serves anything. Swiss offers a simple, but well-tasting cous cous salad, and on request you get a piece of smoked chicken breast on top. As someone who doesn't like chicken I appreciate it's optional.

After only seven hours and 17 minutes we are already touching down in Montréal. Passengers are greeted by the newly designed international terminal. Nobody waits in line at passport control, the officer is friendly, I pass immigration in one minute, and even my driver waits for me. Why can't flying be always this simple?

Swiss has definitely a striking sales argument with its superb lounge in the satellite terminal at Kloten airport. Even the hardware of 2009-vintage in the A330, especially the "throne" seats, is still a very good product. If inflight wifi is added soon, Swiss is well positioned for the medium term future, within the Lufthansa Group and in the market overall.