PARIS - For the first time since 2009, Air France is introducing a brand new aircraft type this week into scheduled operation. Eight years ago, it was the Airbus A380, now it is the Boeing 787-9. It took over the carrier's daily service from Paris CDG to Cairo on January 9, a flight lasting 4.5 hours.

The first real long haul sector will be introduced when the second of 16 787-9s ordered will be delivered this spring, with service from Paris to Montreál taken over by the 787 on May 1. But there are opportunities to experience the newest addition to the Air France fleet on the cheap within Europe before. 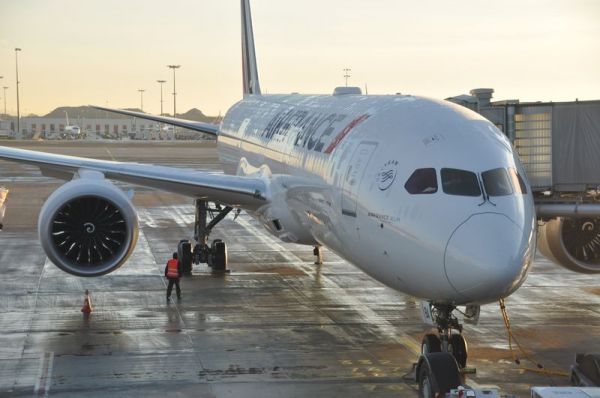 From February 6, flights AF1680/1681 between Paris and London-Heathrow and return are flown by the first 787 (except on Wednesdays), with one way Economy fares offered at bargain prices as low as 66€.

With the deployment of the second aircraft, one round trip between Paris and Lyon is planned to utilize the aircraft in between flights to Canada, also to give flight crews an extra opportunity to rack up take offs and landings.

The weekend before entry into service, Air France conducted four highly successful, booked out "Welcome 787" flights over France, a fare in Business Class was 787 Euros. PaxEx.com was invited to board special flight AF787 prior to the public flights, introducing the new Dreamliner to invited guests, hosted by Jean-Marc Janaillac, Chairman of Air France-KLM as well as Franck Terner, CEO of Air France.

One innovation of the 787 introduction is easily visible before boarding - the "AIR FRANCE" brand name now appears in much bigger letters above the windows on the forward fuselage, in a slight modification of the livery. 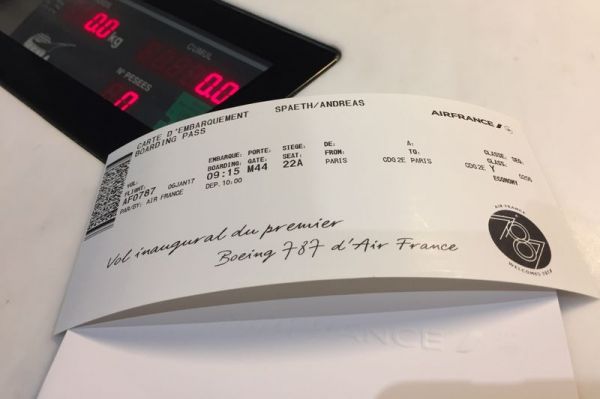 One of Air France's weaknesses is the currently very inhomogeneous cabin product, particularly in Business Class. It ranges from aging angled lie-flat seats, especially in the A340-300 fleet, which are also still found on board the ten A380s delivered since 2009, to the revamped cabins of the Boeing 777s.

The rollout of the newest 777 product started in June 2014, and it will still take until December 2017 before all aircraft have been taken care of. Currently, 44 of 68 Boeing 777-200ERs and -300ERs have been upgraded. Nine of currently 11 A340-300s, some over 20 years old, shall only be phased out within the next three years, Air France Fleet Director Nicolas Bertrand tells PaxEx.com, although the plan was to replace them one by one with the incoming Dreamliners already.

As the A340s ancient cabins will continue to offer customers only a fraction of the comfort of the newer aircraft interiors, the biggest uncertainty surrounds the A380 fleet. 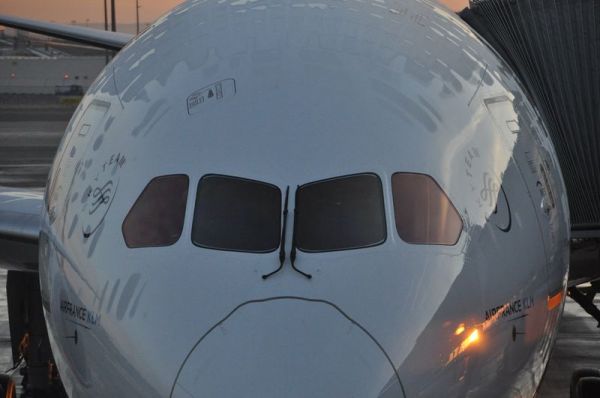 "We are now making a plan and shall start retrofitting a new product from 2019", says Bertrand. Meaning that it will take at least until 2020, over ten years since their introduction, before passengers can expect to see enhanced A380 cabins matching the offerings of 777s and now the 787.

The wild variety of product levels isn't helped by the introduction of the first Airbus A350-900s at Air France, planned for September 2019. While KLM had gone ahead and took the first 787 of the group in November 2015 and now has eight in service, with the A350, Air France will take the lead.

Air France's Dreamliners offer 276 seats vs. 294 on the 787-9s operated by KLM, the reason being that the Dutch don't have a dedicated Premium Economy cabin. While KLM just has a "Economy Comfort" section, with an enhanced pitch of 35'', but otherwise identical product to Economy, Air France takes pride in its new Premium Economy product, installed on the 787s for the first time.

There is a dedicated cabin (rows 10-12) with 21 seats in 2-3-2 configuration. "We use the Zodiac Airgo FX Premium seats and enhanced the pitch from 38'' in our previous product to 40'' now", Customer Experience Manager Fatou Gueye tells PaxEx.com. Which is not top notch, as JAL and China Airlines are offering up to 42'' with the same seat hardware. 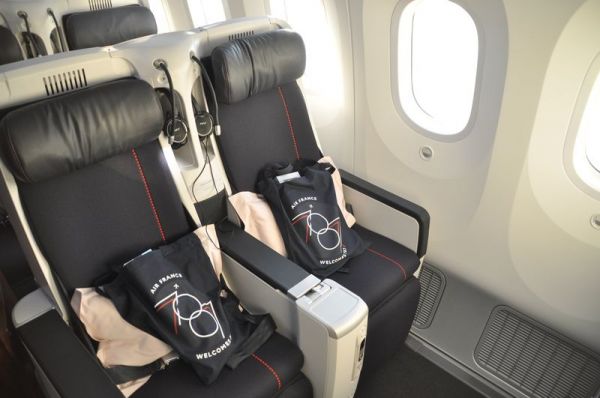 But still Air France's newest Premium Economy product is easily among the best offerings anywhere currently, boasting a bigger recline of 130° now vs. 123° before within its fixed shell.

This kind of seat in Premium Economy was an industry innovation when first introduced by Air France in 2009. The screens for the IFE system provided by Panasonic, as on the 777s, have been enlarged as well on the 787, from 9'' before to 11'' now. Air France also made it clear from the start that their new Premium Economy class is a premium product with many of the privileges of Business Class, from dedicated check-in to fast lane security access or dedicated meals and even champagne included. 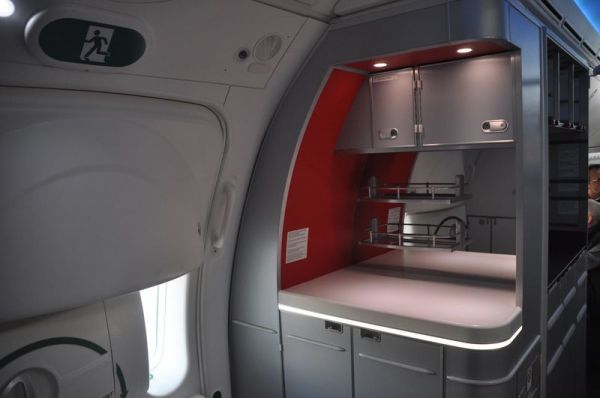 A very welcome innovation of the new product is the much larger, foldout table, which can support a laptop easily. The new footrests, coming higher up than before, will also make the seat more comfortable for many passengers, depending on their body length.

In the 787 Business Class, not much has changed vs. the enhanced 777 product, with the exception that the Zodiac Cirrus seats in 1-2-1 outward herringbone configuration are 8cms less wide each, due to the narrower fuselage diameter of the 787. But this is hardly noticeable in the seat itself, as it has been taken away only from the side panels. 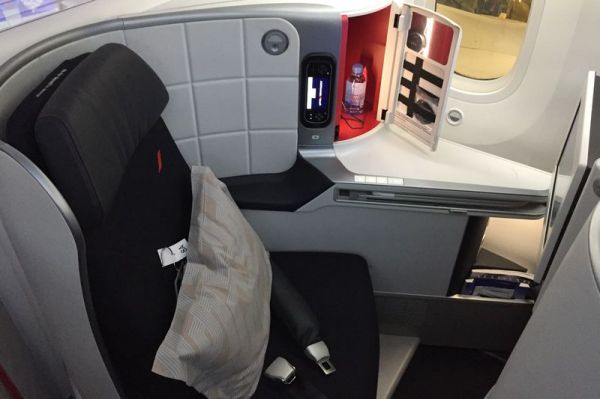 This cabin is identical to KLM's on the 787. A new feature in Business is a - smallish - bar corner in a space next to door 2L. Nothing to write home about, but still a welcome opportunity to stretch ones legs on a long flight without standing too much in the way. One minus is there are only two lavatories for 30 passengers, all the way up in front of the aircraft. In Economy Class, the width of the 225 seats (3-3-3) has been slightly enhanced (now 17.5'' vs. 17.05'' on the 777).

The first Air France 787 is the first aircraft of the whole 225-strong fleet being Wifi-enabled. Which is very late compared to many other international carriers like Lufthansa or Emirates. "The technology wasn't good enough, but now it is time", concedes Nicolas Bertrand.

With this argument, repeated like a mantra, Air France-KLM has refused to sign on for on-board WiFi for years, with the competition gaining big advantages. The Panasonic eXConnect system using Ku-band satellites seems to work fairly well and fast, according to people who have used it on Air France's 787 flights. 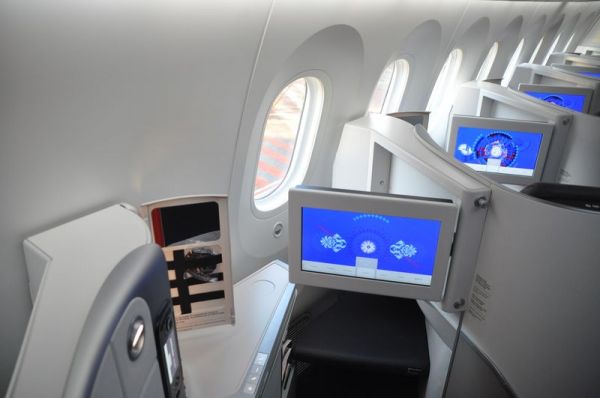 The fees, however, are charged for data packages, the most customer-unfriendly solution, as passengers can't have any idea how fast their package is used up. Rather than offering a flat fee like Lufthansa, Air France charges from 5€ for 20MB, 10€ for 50MB and 30€ for 200MB.

In September, Air France-KLM had signed with provider Gogo to equip a total of 124 long-haul aircraft of both carriers, 68 Boeing 777s and 15 Airbus A330s at Air France, but again only starting at the end of 2017. And also no word on any plans for the A380.

In any case there is no doubt that the inflight experience on board the Boeing 787-9 is a superior one, as was demonstrated on this "Welcome 787" flight circling nearly all of France in two hours and 42 minutes in the air. The near-perfect weather conditions were surely an advantage, enabling stunning views of Montblanc in the Alps or Mont Saint Michel in Normandy. 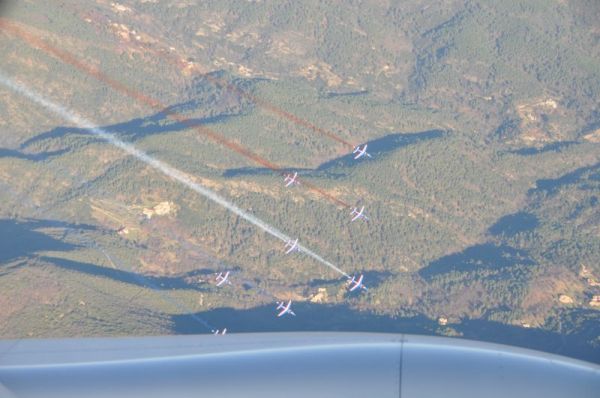 The highlight, however, very French in its celebration of aviation, took place high above Provence: A stunning performance of the Patrouille de France aerobatic team, appearing underneath the 787, emitting smoke contrails in tricolore colours. There was probably never a better occasion to appreciate the fact the 787 boasts such exceptionally large windows.