Condor and its premium products on medium and long haul

FRANKFURT - Holiday flights have been a class-less society for long. Since the 1990s some European holiday carriers have tried out premium offers on long haul flights, but rarely did they exceed the status of a minimally enhanced Economy. The holidaymaker wants to travel on the cheap, that seemed to have been the assumption.

Condor already introduced its "Condor Comfort Class" in 1991, coinciding with the introduction of the Boeing 767, while former LTU dared to introduce its "LTU First Comfort" in 1998, both distinguishing themselves clearly from cattle class.

Premium offerings on medium haul holiday flights have been largely unknown on the German market, until LTU put their toe in the water with its "European Comfort Class" about a decade ago, while Condor kept up with its Premium Class in 2010. Also because Condor serves some destinations from Alaska to Kenya that have potential appeal to business travellers as well, it is warranted to have a look at their long haul product also for non-leisure flyers.

But let's start with medium haul.


Flight Report Condor 1
Airline
Condor
Aircraft Type
Airbus A321
Cabin
Premium Class
Date
December 18, 2016
Route
Arrecife - Hamburg
Flight
DE1439
Arrecife airport on Lanzarote in mid December. There are many airlines flying between the Canary islands and Germany, but only Condor offers an enhanced product by the name of Premium Class. The fare is almost shockingly low for a flight of almost five hours: 152 Euros! OK, presumably there is not a lot of demand for flights back into the cold shortly before Christmas.

Usually the ticket costs more, at the end of the Easter holidays an online check yields the crazy price of 709 Euros, one way. In general, Premium Class goes for about 100 to 200 Euros extra per leg, compared to the cheapest offer. For that you are getting a separate check-in counter, also in Lanzarote, where online check-in doesn't work. 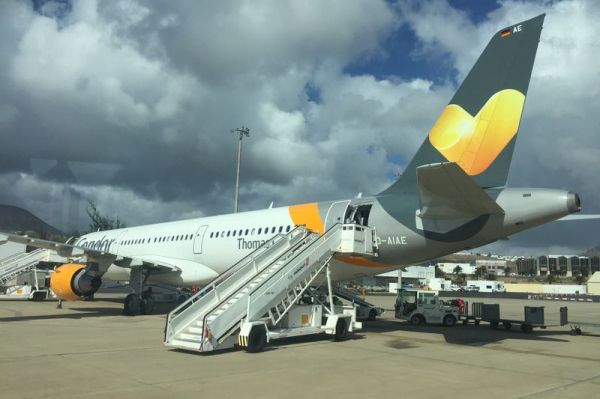 At the counter there are many people queuing up that are not flying Premium. A friendly TUI tour guide, who is overseeing the process, requests other passengers, without me asking for it, to step aside so I as a Premium customer can get to the counter. My suitcase is not reaching the 25 kilos it would have been allowed to weigh, and I am also not using up my limit in cabin bags, raised to ten kilos.

There is no fast lane in Arrecife, which I would have been able to use with my boarding pass stating "PREMIUM", but no wonder, as almost no other airline has any premium product from here. 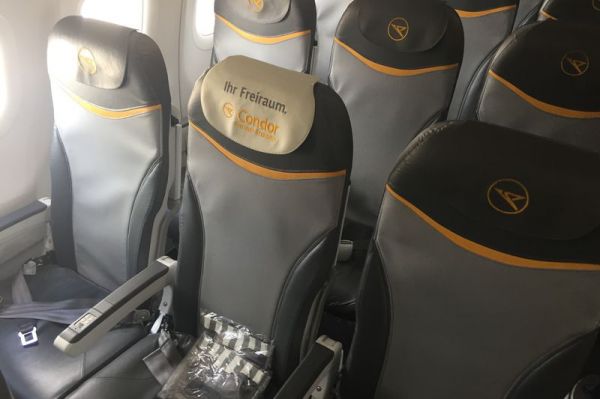 On this flight only the first two seat rows of the two-year-old A321 are assigned to Premium Class, making a total maximum of eight passengers, because the middle seat stays free. I am sitting on 2F, all other seats are occupied as well, no wonder at this low fare. On the empty middle seat lies a transparent plastic pouch, the so-called "wellbeing set", containing socks, eyeshades, ear plugs as well as earphones of the cheapest kind. The bag offers itself for after-use in taking liquids along in carry-on bags.

Flying Premium Class feels a little like flying in the good old times when all holiday carriers treated all passengers a bit like we are treated here now. Before take-off a friendly flight attendant offers magazines, after departure drinks, which are all inclusive here, unlimited, also alcoholic ones, which otherwise are charged for, costing three to five Euros. 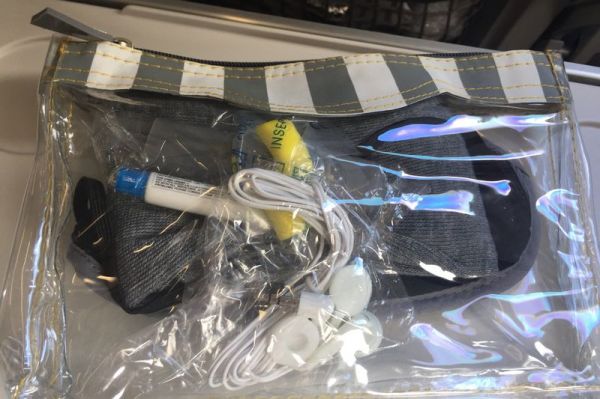 Then the meal arrives, equally included, while other passengers can just purchase smaller snacks. There is no selection, unless one pre-orders a special meal, vegetarian for example.

"Haute Cuisine above the clouds" boasts the printed-on cardboard box covering the meal tray, and "selected fresh ingredients". Of this I become seriously doubtful once I am able to decipher the small print on the foil covering the heated porcelain dish. That's when I first become aware of what I am going to eat soon - "Beef Goulash Potato Leek Mash" it says, adding: "Best before 24.01.2019". 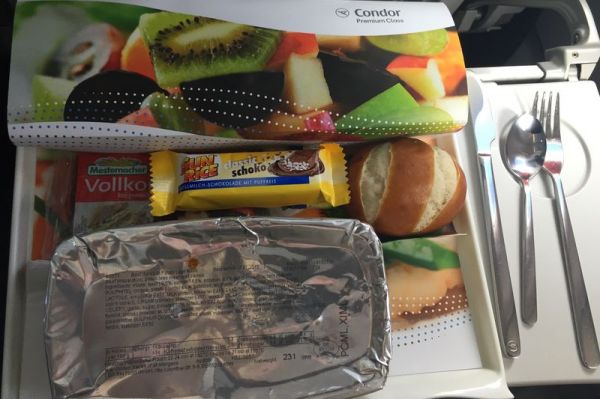 Aha, so this is a non-perishable instant menu, meaning the contents the master chef put together can't be that fresh anymore. Still, the meal is OK, but doesn't even evoke a hint of "Haute Cuisine" that nobody would have expected anyway. For me, it needn't have to be a double round of meat with smoked pork also in the appetizer, but it is for sure filling enough.

Premium Class, at least at this fare, offers a value-for-money proposition that is hard to beat, even thought seat pitch of 30'' is as tight here as in the other rows.

On its long haul routes to worldwide destinations served by the Boeing 767 fleet Condor offers an enhanced product since 2014, and since then it's actually called Business Class. This means the holiday carrier automatically puts itself up against network carriers and their cabin of the same name, while it is not really on the same level in many respects.


Flight Report Condor 2
Airline
Condor
Aircraft Type
Boeing 767-300ER
Cabin
Business Class
Date
January 31, 2017
Route
Frankfurt - Cape Town
Flight
DE2290
Let us look at the route from Frankfurt to Cape Town, which Condor serves up to three times weekly in winter. In late March and early April, flights in Business Class are as cheap as 1,162 Euros per leg, while Lufthansa charges about 2,800 Euros on the same route. This is important as background, to do a fair comparison.

Because the differences are numerous: The Condor ticket for example is not flexibly re-bookable or refundable unless you book the "Flex Option" for an additional 150 Euros. There is a baggage allowance of 30 kilos (Lufthansa 2x32 kilos) plus 12 kilos in cabin bags (up to two pieces), and there is a flat rate for Miles & More FFP miles of just 2,500 for any Condor Business Class flight. So in total a kind of "Business Light", but for an attractive fare. 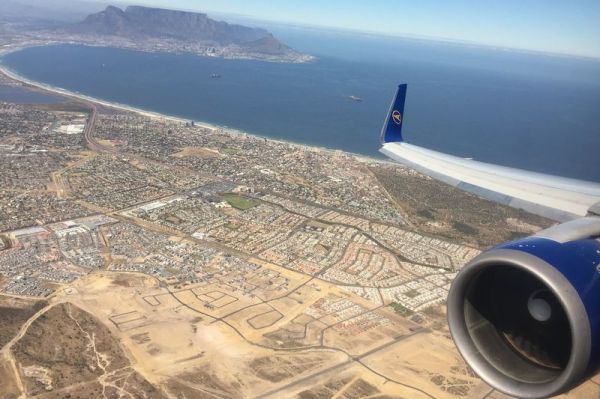 Taking a Lufthansa feeder flight into Frankfurt like me, you can't check in online for Condor, but still use the Lufthansa Business lounge in Frankfurt. Deployed on the flight to Cape Town is 23-year-old Boeing 767-300ER D-ABUL, boarding is through a separate lane.

The aircraft is fitted out with 30 seats in Business Class (Condor also operates a version with 18 seats), five rows in 2-2-2 configuration, I am seated in 2G. Both front row seat pairs 1AC and 1HK clearly offer the advantage of more leg room, but on this twelve-hour flight 1HK is blocked and curtained off as crew rest. Seat pitch here is 59'' (152.9cm), otherwise 58'' (148.8cm), while Lufthansa offers 64''. 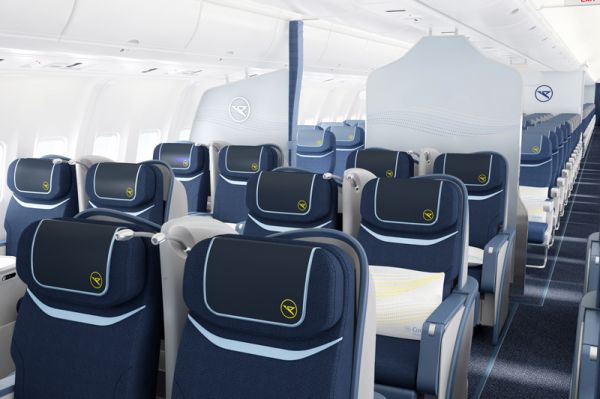 A distinct minus of Condor's offering is the 10° angle in the bed position (Lufthansa offers full flat) and the shortness of the bed of only about 180cm (Lufthansa: 198cm). Condor offers a 15'' screen at every seat plus power outlet and USB port.

What distinguishes Condor in general are its cabin crews, I have a feeling of often encountering much more enthusiastic staff here than at network carriers. That shows again this evening, smiles, real compassion, something frequent fliers don't get to experience too often. Before take-off a glass of champagne (Duval-Leroy Brut Réserve) is offered.

After the on-time departure I have trouble with my headphones. Mine is fitted out with a 2-pin plug, but I don't find any socket to plug it in. Only several flight attendants together are able to solve this, the 2-pin plug has to be pulled off revealing another 1-pin plug below, for which there is a socket. But it still doesn't work, only after requesting another pair of headphones.

The IFE offering is not huge, 30 films and many more audio CDs among other things, but the content itself is of good quality. 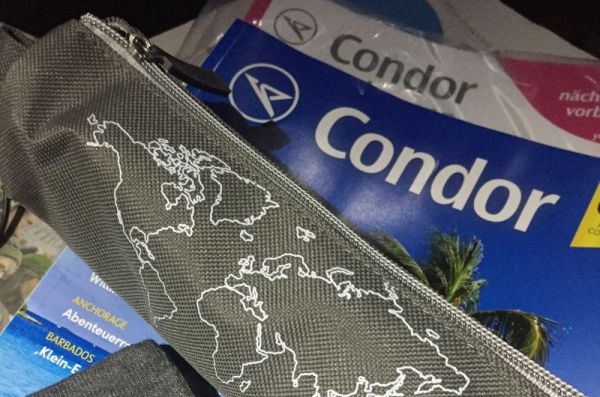 This is a night flight, but unfortunately it feels like eternity before the service starts. Only after one hour in the air, menus are distributed and drinks (among them two white wines and two reds) served, absurdly late, now after 11pm German time. Until the starters arrive, one hour and 42 minutes have passed since rotation, it's midnight.

On the tray there are two starters (sliced breast of guinea-fowl with radish salad and pesto as well as halibut and salmon filet on fennel-apple salad) plus leaf salad and cream cheese dip, also the cheese is already served. The fish tastes good, but if one would eat it all that's offered one would be more than stuffed, especially at this hour.

There are three main courses to choose from (beef roulade with Spätzle pasta; salmon fillet and scampi with shiitake mushrooms, soy beans and barley risotto; ricotta ravioli and grilled mushrooms). I already regret to have ordered anything at all, as it takes endlessly before it arrives. 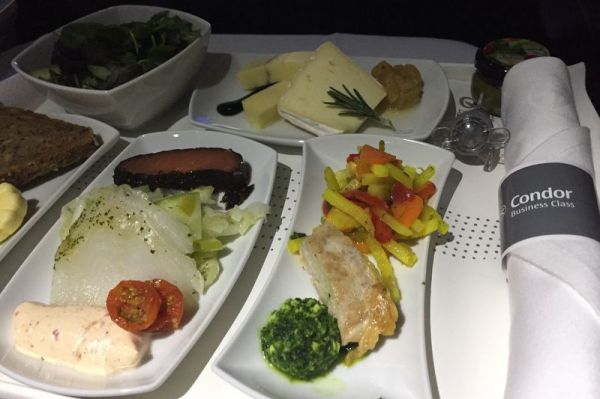 I had opted for the fish, which tastes OK, but I just try it and then turn in my tray and let go of the desert (cherry cake). A wise decision, as shortly after, strong turbulences lead to the service being interrupted altogether.

I extend my seat to bed length and try to find rest. Difficult, because, I have to say unfortunately, for a man being 1.88 meter tall this is not a comfortable place to sleep, and I have already spent several nights on this Condor seat. The cover is hard, especially at the foot end, which bends down nastily at the end, and that consequently prevents sound sleep, at least for me.

Initially I put the wrapped blanket as a cushion on the lower end, which brought a bit of improvement, but doesn't prevent the dreaded slide effect which angled seats are prone for.

While I try to doze off, protected by eye shades and ear plugs (both from Condor's handy pencil case-like amenity kit), the impossible happens: At about 2am German time, when apparently the service finally drew to a halt, the crew plays a commercial for inflight shopping in high volume over the PA, first in German, than English. Hello??

Apparently it's not only me that detests this crass disturbance as an acoustic assault. This is a no go! Later the disturbance goes on in a different way - on mine and the adjacent seat, the screens can't be fully turned off and flick on again continuously, with an annoying glow. Again, it takes several requests before the crew deactivates the screens from their IFE station.

Not surprisingly, I feel seriously wrinkled in the morning. I hardly touch breakfast (cold cuts and cheese, scrambled eggs with veal bratwurst, Bircher muesli), having only a bit of the yummy muesli. The drinks service is extremely slow, most passengers have cleared their plates already until the young flight attendant offers tea or coffee. But she does it with a very pleasant (or apologetic?) smile.

But then, all of a sudden, the smell of warm cinnamon wafts through the cabin and revives my spirits. As breakfast has been cleared already (if it is planned this way or not is unclear) a flight attendant offers warm cinnamon buns from a basket, delightful. Now I am finally ready for Cape Town, where we land on time in the Southern summer after flying eleven hours and 25 minutes.

Condor generally offers value for money with its premium products on medium and long haul routes. And a welcome chance for holidaymakers to start or end their vacation more comfortably. For business travellers, the offering is not entirely suitable, but can in some cases be an attractive fare alternative to network carriers. At the same time, Condor absolutely doesn't match their Business Class standards of comfort in lie-flat seats on long haul.