KEFLAVIK - Icelandic LCC WOW air is a prominent newcomer to European aviation, which makes quite a wave not only because of the bright purple color in which its aircraft are painted. Travel writer Monica Suma reviewed the WOW air A330-300 product on behalf of PaxEx.com.

Having started operations in October 2012, WOW air serves North America since 2015 via its hub in Keflavik, Iceland's international airport near the capital Reykjavik. Since June 2016, WOW air complements its fleet of seven A321s and two A320s with their first wide bodies, leasing two A330-300s from Air Europa.

My trip starts mid morning at Paris' Charles de Gaulle busy airport, en route for my 11:40 flight to Iceland. To get to check-in from the train station, I take the intra-airport train CDG-VAL, which mysteriously halts for some twenty minutes. Given WOW air is located in Terminal 1, the furthest terminal from my current location, I decide to wait it out.

Charles de Gaulle Airport is already immense, so leaving the train would surely make me wave goodbye to my comfy seat on board. 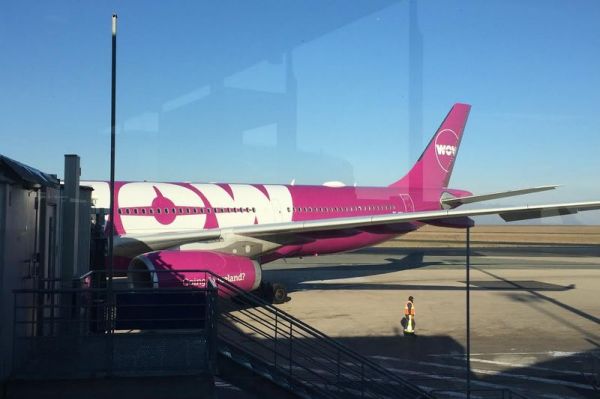 Finally the air train resumes service and luck has it the flight is also delayed some twenty minutes, so I breathe with relief. Check-in goes fairly smoothly; no big line, and I check my bag weighing almost 19 kilos, 20 kilos being the maximum for the hold baggage, as opposed to the usual 23. 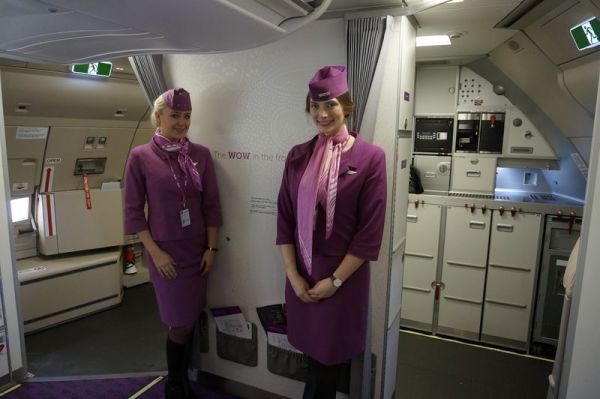 WOW air's fees catalogue is very complicated and requires a good amount of research to understand. Perhaps easier would be to opt for one of their newly offered packages, starting from €92.37 per flight leg including one larger piece of cabin bag weighing up to twelve kilos, while the bare bone flight is available from just €41.99.

I keep my backpack as the one large carry-on that was still allowed free of charge when I flew in January, of maximum 56x45x25cm. This free carry-on, however, doesn't exist anymore, now only a "personal item" is free of charge; it must fit under the seat in front of you and can't be bigger than 42x32x25 cm.

As soon as I spot the stylish purple luggage tags that read "you are what you pack," my excitement to embark the Icelandic aircraft swiftly returns, starting with "bon wowage" cleverly displayed on the boarding pass. 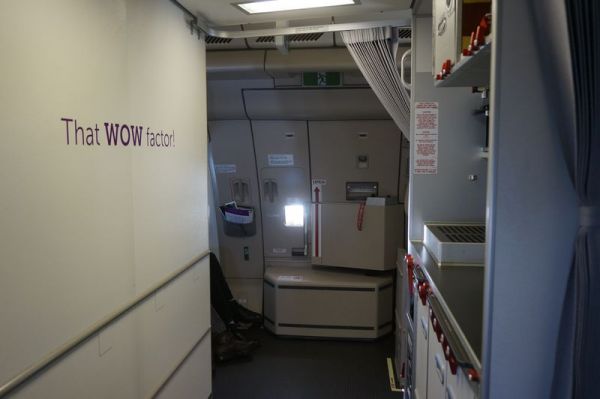 It's still a hike to get to my gate, but once arrived, I enjoy the sunny skies and the aircraft parking in clear sight. The bold pink hue - or rather purple - of WOW air reminds me at first sight of Wizz Air and its brand colors. But at a closer look, I realize it's quite different. Indeed it's "paint the sky purple" as its motto so mentions.

Unlike any other airline, WOW air chooses the registration name of each aircraft very carefully, with fun names that best represent the quirky airline. Resembling a family of its own, the WOW fleet includes names such as TF-MOM, -DAD, -BRO, -SIS, but even more original are the -JOY, -GAY and -LUV.

I'm flying today on the new TF-WOW aircraft, seating 342 (which changes with new "Big Seats" offered from June 2017), rather surprising for the three-hour flight-time, as the Paris route is normally served by an A321.

Boarding takes some time, as it's a full flight. My seat 5K, however, is easy to reach in due time. There is a single Economy Class cabin, however seats with extra legroom are available for a fee. Mine seems to be one such seat, as it feels more spacious than most Economy Class seats, though I didn't pay extra. Officially, WOW air's general pitch is 31'', while the so-called XL seats have 34'' and the new "Big Seats" promise to offer 37''. 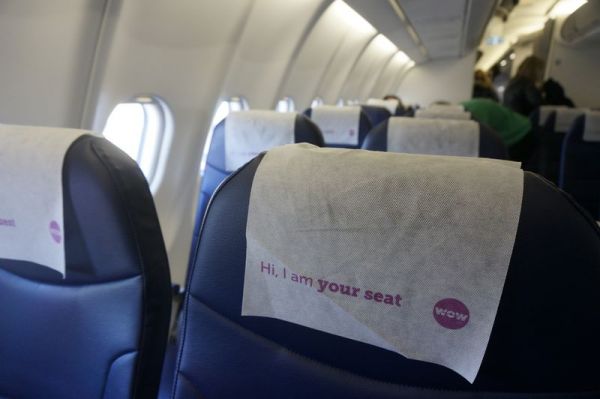 I have no problem storing my carry-on, and right from the get-go I'm enthralled by the clever welcoming messages on display on each seat and above. The added bonus is how friendly the flight attendants are, stylish with their berets and of course wearing head to toe purple. Perhaps a bit too much already, even the carpet reads WOW in black typo in a very purple shade.

As I settle in, part of my excitement with any new airline lies in the entertainment and the food and beverages offered. Well, the Icelandic low-cost carrier offers none of that, not even a free glass of water. So if you're not willing to spend €2.69 on a simple bottle of water, or you didn't come prepared with a sandwich, you're out of luck until you've reached your destination.

I packed two small sandwiches and some fruit, but I'm still keen on ordering the famous skyr, decently priced at €2.69, a thick yoghurt of sorts that's been part of Icelandic cuisine for over a thousand years.

Entertainment wise, there are no screens to be seen, only iPad rentals for 17 euros to watch a movie or play a game of Tetris or Angry Birds. The movies offered are a few years old, so I'd save your money for Icelandic treats instead. By this point, I'm surprised Wi-Fi isn't also offered for purchase. 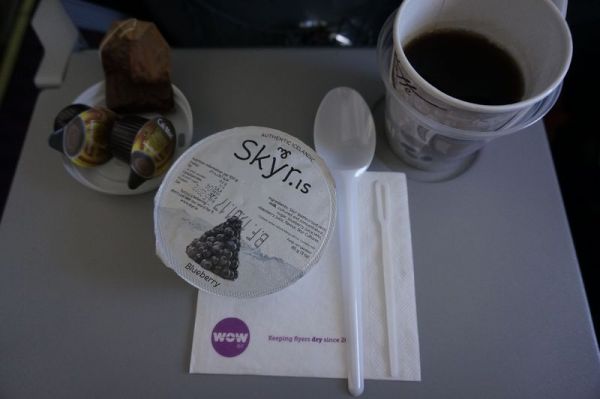 The first thing I usually check for on any airline is the in-flight magazine. I don't see any, so I call a flight attendant to ask if a WOW magazine even exists. Apparently it does, I am assured, and it's so popular, many people take it with them. As a voracious travel magazine reader, I insist to get one, two in fact, for the passenger next to me as well. Indeed, the magazine doesn't disappoint (and shhh, I steal one copy as well).

While ringing the flight staff, I notice a slew of hilarious sentences next to each attendant bell. With playful catch phrases such as "saved by the bell," "ding-dong, anyone home?," "honk if you're hungry" or "put a ring on it" as Beyoncé's song, I tip my hat to WOW air's branding team. Just brilliant. For all its minuses justifying the lower price point for a ticket, WOW air excels at creativity. 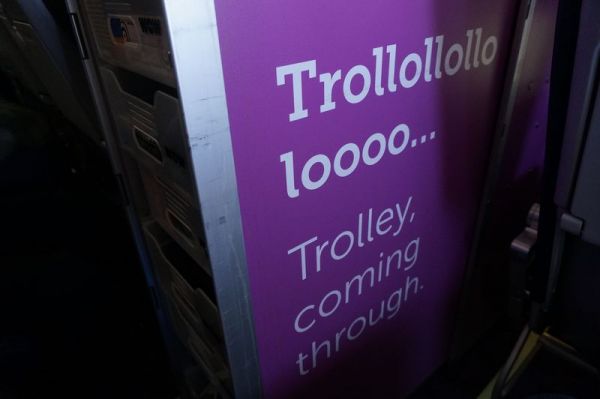 It's also a rather useful platform to maximize your knowledge about Iceland. There are ads for Reykjavik Excursions, a popular tour company most tourists use, as well as the possibility to buy FlyBus tickets on board, indispensable between Keflavik International Airport and the capital of Reyjkavik. As the price is the same on board, as is on the ground, I take advantage and save myself a few extra minutes of wait once landed.

Meanwhile, "I keep this aircraft from being trashy" trolleys go through, doing just that. Nothing really is boring on this flight. Half way into the flight, I attempt charging my iPhone. The outlet is inconveniently placed under the seat, between the two seats next to the window where I am seated.It takes me some time to realize it isn't charging properly, but rather on and off depending on how expertly I move the cord. 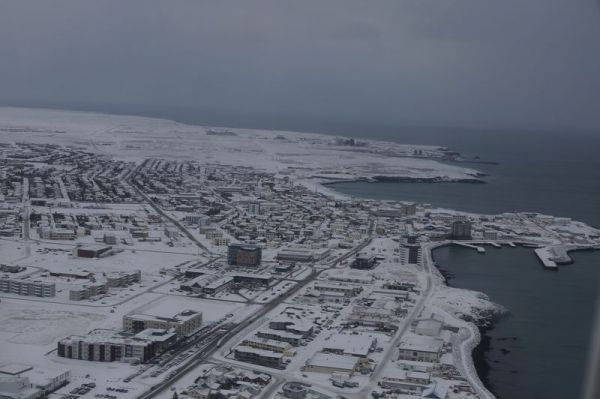 As we approach our destination, a winter wonderland reveals itself. Iceland is entirely covered in snow, an ethereal sight of lava covered in white. The landing is rather bumpy, but all in all, my first experience on WOW air is rather wow, I won't lie.

Aside from the obvious lack of pampering, the Icelandic low-cost carrier looks and feels rather boutique, and it certainly is memorable, which I can't say of any other low-cost airline I've flown. As long as you pack light and smart, and you prepare with snacks and entertainment ahead of time, WOW air is a fantastic option to get across Europe or the Atlantic, for a much lower price.

It's best to book one of their packages, in terms of value for money and to spare yourself having to understand their complicated fees.