DUSSELDORF - Air Seychelles is the national carrier of the Seychelles in the Indian Ocean. For the country consisting of 115 far flung islands, whose total footprint is a third smaller than the German city of Hamburg, and of which only a few are inhabited by a total of 93,000 people, tourism is the number one source of income.

And that makes decent air connections a decisive factor of national interest. The airline started to fly long haul already in 1983, among other destinations its Boeing 707s served Frankfurt, later Boeing 767s flew to Rhein/Main airport as well, but also to London and Paris.

Since January 2012 Air Seychelles is 40 percent owned by Etihad, since then its fortunes have improved, thanks to input in capital, expertise and aircraft from Abu Dhabi. Currently Air Seychelles only serves Paris in Europe, but on March 30 a decisive expansion step will follow, when Air Seychelles, now equipped with two A330-200s, adds two services per week to Dusseldorf to its network.

At the hub of its Etihad Partner Air Berlin the airline, then boasting a total fleet consisting of two A330s and A320s each plus six Twin Otters, hopes for good feeder services. 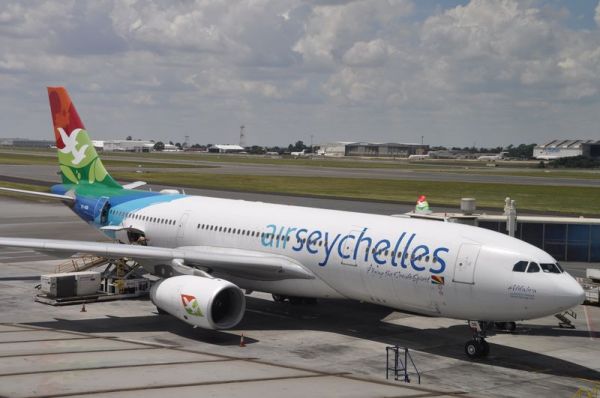 I had the opportunity to get familiar with the Air Seychelles' Business Class product before the start of Dusseldorf services on the route from Johannesburg to Mahé, the main island with the international airport, which is currently served five times a week. Departure is set for 13.45 at midday, and check-in at the Business Class counter proceeds as swiftly as the security check.

While Air Seychelles will use the Air Berlin lounge at Dusseldorf for its Business Class guests, in Johannesburg passengers may visit the Shongololo lounge, a third-party lounge utilized by many airlines with a smaller presence at OR Tambo Airport. I find a quiet corner at a window with a view of several parked A380s, and I get me some sushi on plates sealed in foil, which tastes surprisingly good with a glass of cold Sauvignon Blanc.

A lengthy walk brings me to the boarding gate at the end of the international pier, erected for the football world cup in 2010. A long queue of people waits at the gate entrance and can only proceed to the proper counter once checked for passports and boarding passes. A separate Business Class lane doesn't exist outside and once inside its useless. 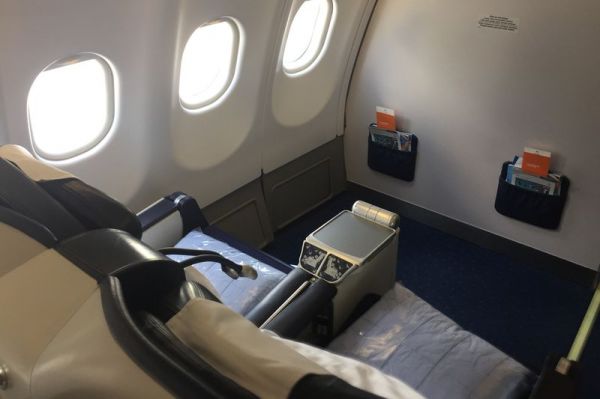 The aircraft is almost fully booked, and as it turns out the seat next to me is the only one remaining free in the Business Class cabin, offering 18 seats. Which is a blessing, in several respects as is to be seen shortly. The Airbus A330-200 registered S7-ADB has been the sole A330 of Air Seychelles for two years and it flew with Etihad Partner Jet Airways in India since being delivered in 2006.

This is the period where the Business Class seats originate from, installed in a 2-2-2 configuration in three rows. The product hails from an era when it wasn't usual to offer private cubicles in Business Class. Phenomenal, however, is the seat pitch of 82'' (208.2cm) which prevents me from reaching the pocket in the back of the seat in front when seated and buckled in.

The seat can be extended into a full flat bed measuring over two meters in length, as long as in First Class elsewhere. This however does not apply to my seat 3A, which hardly moves, the back can be lowered an instant and the footrest raised a few inches, but not more. But luckily the adjacent seat is empty and functions. 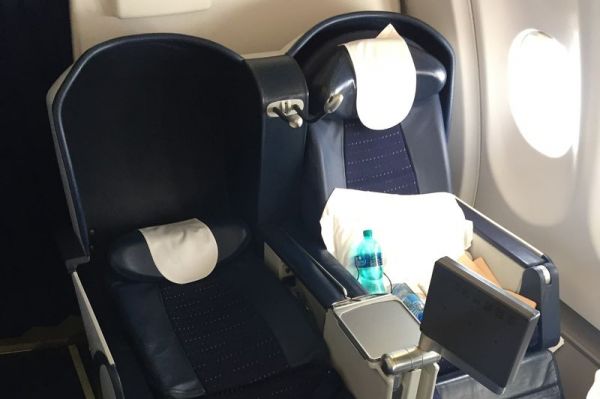 Air Seychelles is a national carrier transporting business travellers as well as tourists, especially in Business Class, on my flight it's obvious all are on holiday with the exception of two women, and all others are couples. It is interesting to make a fare comparison with Condor, serving the Seychelles nonstop from Frankfurt.

For a trip outbound in the second half of April and return early May Condor charges from 2,200 Euros in Business Class round trip, while Air Seychelles' fares are around 2,500 Euros, while offering a lot more on board, most importantly a flat bed. Also Condor doesn't include a change of flights, which should be a given in a Business ticket, while Air Seychelles offers this flexibility. 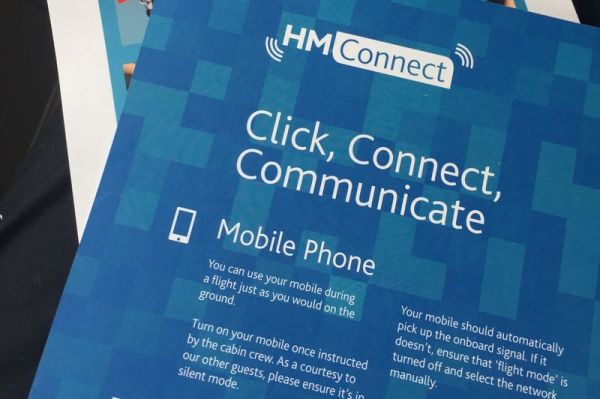 Even before departure it shows that the inflight service, more so even than the hardware, carries the imprint of Etihad, where the flight attendants of Air Seychelles are now trained in Abu Dhabi. From the seat pocket protrudes the orange menu card which says "A la Carte Dining - Contemporary Cuisine" on the cover.

First I can chose a pre-take-off drink and opt for champagne (Nicholas Feuillatte Brut Reserve), very pleasing. Then the flight attendants kneel down in front of passengers to take meal orders and the time when everybody wants to dine. As this is a mid-day flight almost all choose to eat after reaching cruising altitude. But the option of flexible eating times is a hallmark of good Business Class service today, although even many big airlines still don't offer this. 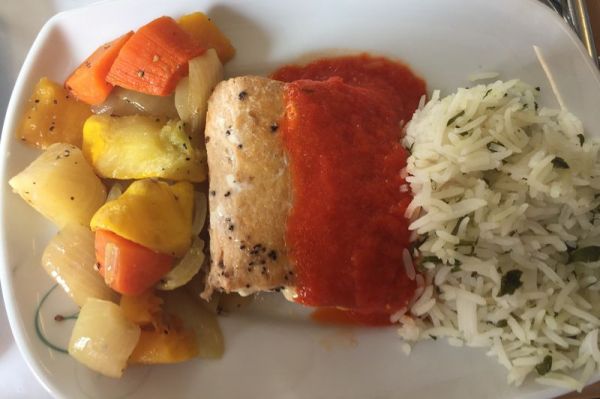 The choice consists of two appetisers (sliced kingclip fillet with citrus mint salad or herbed chicken breast with potato salad and mango) as well as three main courses. Among them grilled beef fillet with sweet potato gratin, seared salmon fillet with basmati rice and vegetables or mushroom and ricotta cannelloni.

For desert finally there is either cheese, lemon tartlet or fresh fruit to choose from. I opt for fish twice plus the tartlet. As I ask if I can also get the fresh fruit as well, I get a hesitant reaction, the attendant wants to check if enough is available, but in the end I get no fruit, a bit strange this scarcity.

We rotate almost on time, and I try as on every flight to find the Airshow in the IFE system, the interactive moving map showing the flight path and flight data. But strangely enough, it doesn't exist here. I try everything, ask the corpulent, friendly purser, who replies it should be there, but can't find it either. Fact is: This function, offered since decades on almost all long haul aircraft, doesn't exist in Air Seychelles' A330.

Very peculiar, and nobody can explain why, even not afterwards. So I hear an audio CD from the IFE, which is not (in contrast to my return flight later on an Air Seychelles A320) the E-BOX system of Etihad. Also the 10.5'' screens folding out from the armrests are not touch screens. But then there is wifi on board, for a fee of course. Surprisingly Air Seychelles doesn't offer me any newspapers, I have to ask for it- and get the funny little island paper. 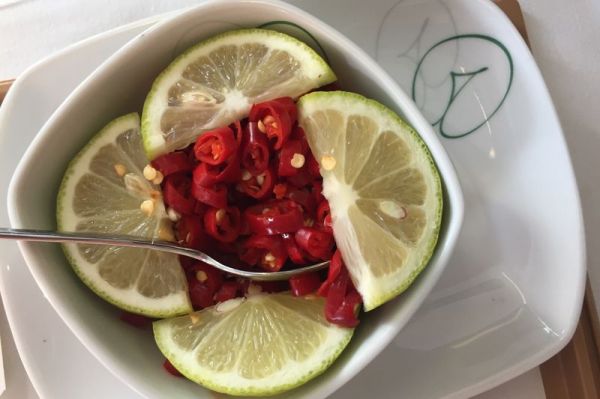 The front rows have their meals swiftly on the table after reaching cruise altitude, for me it takes about 40 minutes after rotation, but totally acceptable, and another round of champagne comes before anyway. The food itself is OK, but not more, not very inspired in any case. The salmon is fairly dry and there is only limited sauce, but then purser delights me asking if I'd like some chilli peppers.

You bet, I love chilli and hot food. And I get a whole bowl of freshly cut red chillis and they are really hot - all of a sudden my meal is fun again. To go with it I choose from the wine list (two reds, two whites, a South African and a French each) a good Sauvignon Blanc from Thelema in Stellenbosch. I particularly like the porcelain of Air Seychelles, depicting the stylised Coco de Mer, endemic to Praslin island.

The lemon tartlet is a yummy finish, and then I indulge in one of the two beverages offered on board that are made in Seychelles. Besides the Seybrew beer that's the brown, aged Takamaka rum, a perfect digestif. After that I extend the functioning bed beside me and sleep over an hour, in this way I could have easily spent a whole night in a comfortable way, a big plus for the full-flat beds on Air Seychelles. And then it's time for landing on the tropically warm airport of Mahé after four hours, 35 minutes. Thanks to the mini terminal and carrying just a carry-on I am in a taxi to my hotel less than 15 minutes after landing.

As a member of the Etihad group Air Seychelles has clearly succeeded in the leap from holiday carrier to fully grown network airline. Even if it doesn't come close to Etihad in its product and though Air Serbia as another smaller Etihad partner offers the more modern Business seats on its A330, Air Seychelles doesn't need to hide its Business Class product on the international stage.

In flying to the islands Air Seychelles competes with the three big Gulf carriers as well as holiday airlines such as Condor, and in comparison to both it can clearly score.