LUANDA - The national airline of Angola in the southwest of Africa is one of the continent's oldest airlines, having commenced operations already in 1940. Still it is fairly obscure internationally. Its home state Angola is one of the most expensive countries on earth, where a civil war raged until 2002.

So far the government has not properly paved the way for any tourism. Angola was awash for decades in billions of dollars coming out of Africa's biggest oil resources, but since the slump in oil prices the economy of Angola is in a bad state.


Flight Report
Airline
TAAG Air Angola
Aircraft Type
Boeing 777-300ER
Cabin
Business Class
Date
April 12th 2017
Route
Cape Town - Luanda
Flight
DT580
Between 2007 and 2016 TAAG (pronounced "tag") was placed on the EU's "black list" alongside all other Angolan carriers, until 2009 it was completely banned from Europe. Afterwards it was allowed just to take their 777s to Portugal. Only last year all restrictions have been lifted.

Since 2015, the airline is lead by a management team sent from Emirates, with which the Angolan government has established a partnership. The vision is to evolve TAAG into the "Emirates of Africa". TAAG, however, is anything but currently. Initially, the new team had to re-define the business model of the airline, overcoming the model of point-to-point flights to and from Angola with its few visitors, and turning it into a network suitable for connecting traffic. 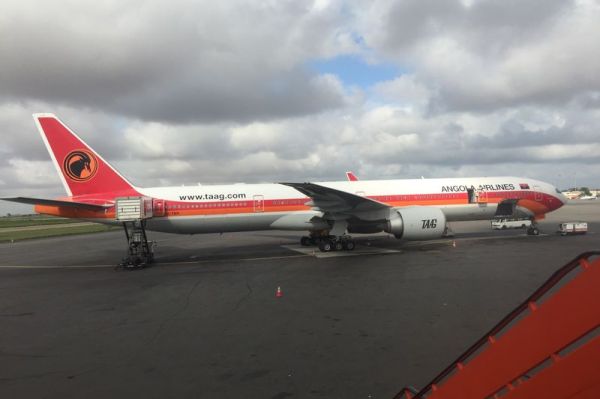 In Europe, TAAG only serves its former colonial power Portugal, eleven times weekly to Lisbon and three times to Porto. Only since September 2015, transfer passengers don't need a transit visa anymore in Luanda, and the flights are now timed for good connections. Especially from Europe to Cape Town, in big demand by tourists in the northern winter, the connection via Luanda is well timed and often fares are a bargain.

Luanda lies exactly on the way from Europe to the Cape, the ground time is not more than 90 minutes and one way tickets from Lisbon to Cape Town can sometimes be found for 220 Euros in Economy.

I am testing the Business Class of TAAG on the route from Cape Town to Luanda, currently served three times weekly, then from the winter schedule daily services are planned. TAAG then flies to Lisbon twice daily which results in good transfer opportunities, as Lisbon is well connected throughout Europe with LCCs.

I have checked in online and fly just with a cabin bag. Unfortunately there are always queues at passport control at Cape Town airport during the afternoon peak hour for the few long-haul flights offered from here. Same this afternoon, as only three out of ten lines are open.

When I finally pass through I walk to the end of the gate area, where TAAG premium customers can use the British Airways lounge. Very spacious and comfortable, it would be nice to linger here longer. But soon and very much on time boarding starts, without pushing and shoving. 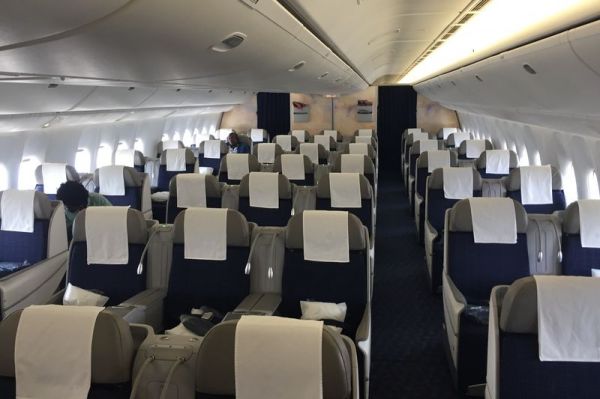 For a good reason: The huge Boeing 777-300ER is only very sparsely filled with passengers. No wonder, as this of course is the wrong equipment for a three-and-a-half hour flight. That's exactly the problem of this airline: Out of prestige reasons the government bought the biggest and most sophisticated aircraft in good times, TAAG in total operates seven Boeing 777-200ERs and -300ERs (with two only having been delivered in 2016).

On the other hand the airline desperately needs more small aircraft, as it only owns five Boeing 737-700s. The two newest 777-300ERs boast a more modern, comfortable cabin product and are exclusively deployed to Portugal. All TAAG-777s fly in three-class configuration, for First there is reportedly a market between Angola and Portugal.

I am boarding the 777 registered D2-TEG, having been delivered almost exactly six years ago, in May 2011. Since then, nothing much has been done on board, the interior shows wear and tear in many places. First Class, offering 12 suites (1-2-1), is totally empty today, in Business (56 seats in 2-2-3 configuration) not even a dozen seats are taken, Economy (225 seats in 3-3-3 layout) is more crowded. 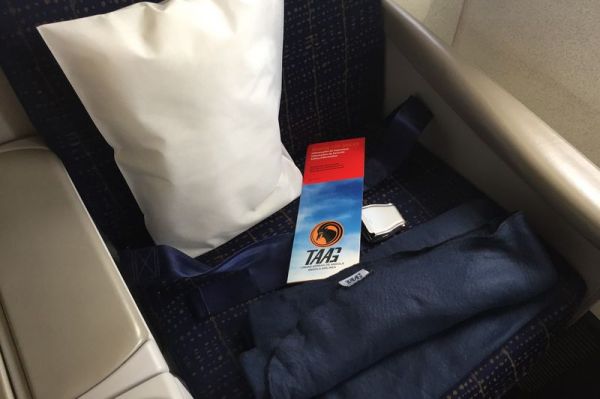 My seat 6A is in the first row of the Business cabin. It offers a lot of foot space, probably even more than the official 64'' (162cm). The Recaro seats with blue covers and retractable outward armrests seem to be of exactly the same hardware as the former Lufthansa Business product of the pre-fullflat seat era.

First I am put off by the worn edges of the central armrest covers. No other airline would leave it like that for long, apparently TAAG does. I am reclining the seat in the fully flat bed position as a test, exactly the angled kind that produces the notorious slide effect, despite the movable foot rest flap. Before take-off, the elderly TAAG flight attendants offer water and orange juice, but no papers. 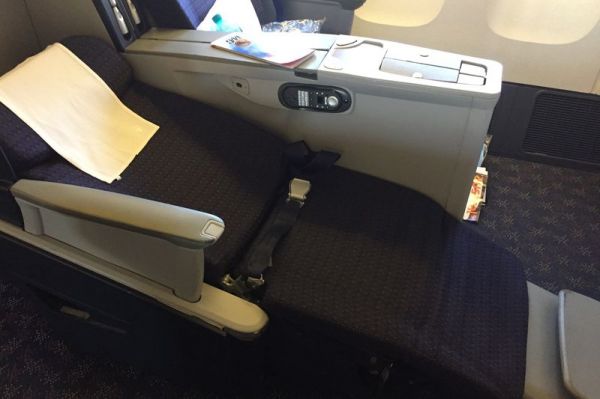 TAAG is proud of its punctuality, and that's not a given in Africa. And indeed, with a scheduled departure time of 17.45, pushback already commences at 17.33 hrs. Exactly at a quarter to six, the twin-engine giant lifts off into the evening sky above Table Mountain. Shortly after rotation, small warm towels are offered, and every Business passenger gets a full amenity bag - on a flight of less than four hours.

At the same time, the bad state of some seats becomes obvious. At 6A and 6B, the screens mounted on the bulkhead remain dark. 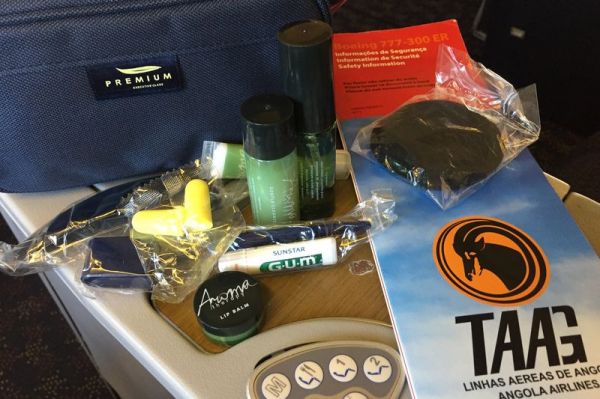 So I move two rows back, the cabin is almost empty, only carrying a few young families and mothers with their offspring, apparently on their way to Portugal, while formerly, many oil workers occupied the premium seats. I am surprised to find a different kind of headset in row 8 than the one I had received in row 6, they look of a better quality.

But it doesn't help, because here, the screens work, but there is no sound. So I move again, almost to the very back, and here it finally all works. On the return flight in another TAAG 777, one cover on my IFE handset is totally missing, exposing the internal electronics. I've never seen that before anywhere in the world. 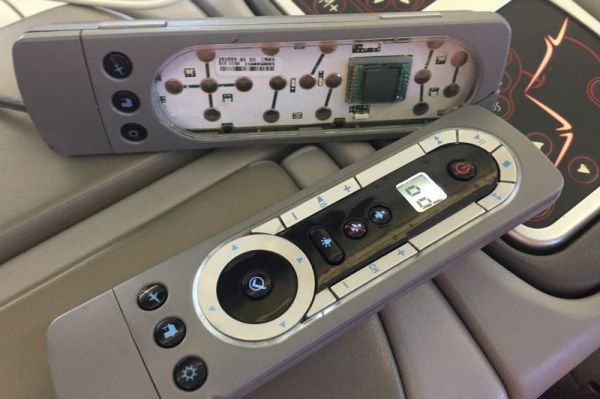 And there are more unexpected premieres to come on this flight: There is no cabin crew to be seen until 34 minutes after take-off, the trolley is arriving. I am surprised, no drinks offered first? And even more surprised as the lady puts down a tray before me, containing a salad and a starter. No menu card? "Fish, chicken or beef?", she asks in rudimentary English.

I order fish and she places a round plate wrapped in aluminium foil on the tray. Then offers some bread rolls and asks: "Drinks?" It is hard to see what is on offer even, in wines for example. I ask for champagne and sparkling water. And indeed she comes back with a well-chilled green bottle, I don't know the brand and I am sceptical.

"Champagne Demoiselle Vranken" says the writing on the label. I ask her to pour and taste it. Yummy! And even cold, not too bad. Apparently a smaller and cheaper vintage, as I look up later, but absolutely drinkable. But then, TAAG doesn't have soda water. Another premiere. Besides, in all three classes, only the same microscopically small pillows are laid out and some mini cloth, supposed to pass as blankets.

I eat the warm main course first, looks agreeable, a piece of fish topped by a herb crust, jacked potatoes, vegetables and a creamy sauce, tastes good. I still would have liked to know what I was eating, especially in terms of the cold starter. Somehow poultry, I guess it was duck breast. What I like most about it is that it comes with pieces of ginger and fresh leek. 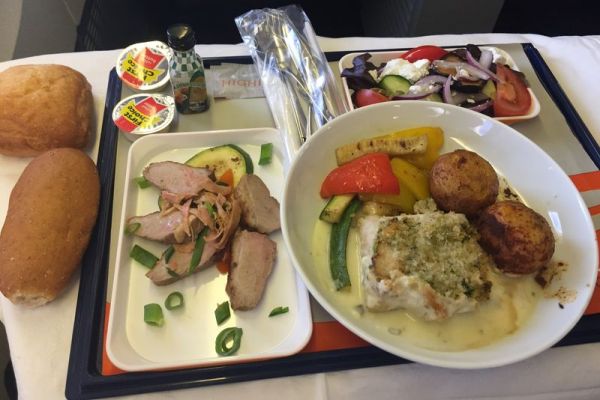 Later I see in the inflight magazine where the catering originates from, and that also explains the decent standard: LSG has a new catering facility in Luanda, even Angela Merkel attended the ground-breaking in 2012.

Still, in many details a lot remains to be desired: The meal is served on a paper placemat stating: "Highfly - Economic Class". That doesn't fit in Business Class and is presumably a misspelling anyway. Several times I ask the flight attendant to walk past the many empty seat rows to refill my champagne glass, she complies, but with an attitude that she couldn't care less.

Then she arrives with desert, and holds up three bowls wrapped in plastic foil in front of me, almost without uttering a word. Cheese, fruit and chocolate mousse. I would like fruit and cheese. Big problem! But unfortunately she can't explain the problem in English and has to summon her colleague, who can't help much either.

That much is clear: Apparently supplies don't allow to give one passenger two portions. As the cabin is almost empty and the travelling toddlers don't care for these bowls, she brings me both in the end, even manages a hint of a smile. So it does work. 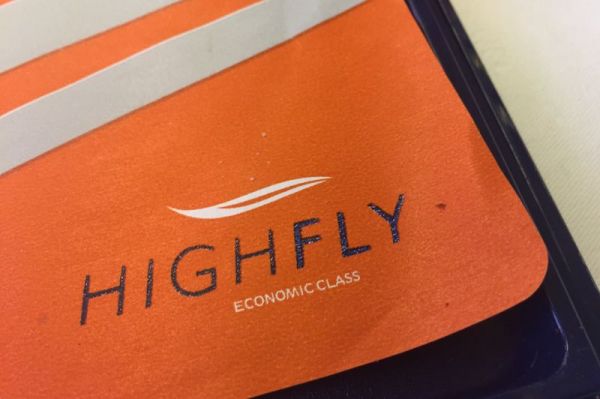 An hour after rotation, the "service" is over, exactly one hour and 17 minutes after take-off, the moodlighting is switched to a glowing orange, imitating the sunset that already has taken place outside. There is nothing more to be seen of the crew for the next two hours until before landing, no beverage offers, zero. I am lucky I took a big bottle of sparkling water from the lounge earlier.

After three hours and 38 minutes we land in Luanda. After disembarking via stairs (no air bridges here), Business passengers get their own bus taking them to the terminal. That doesn't help much, if you have to sit around then for one and a half hours, despite the completed and approved application for a visa costing 150 Euros, because all visa issuing systems of immigration are down. But that's another story.

On the next day, the newly arrived European head of inflight service at TAAG tells me there are no menu cards anywhere because there is a lack of suitable paper, and the printer doesn't work. There is a lack of cloth placemats for Business Class menus, as the existing ones also have the wrong size. 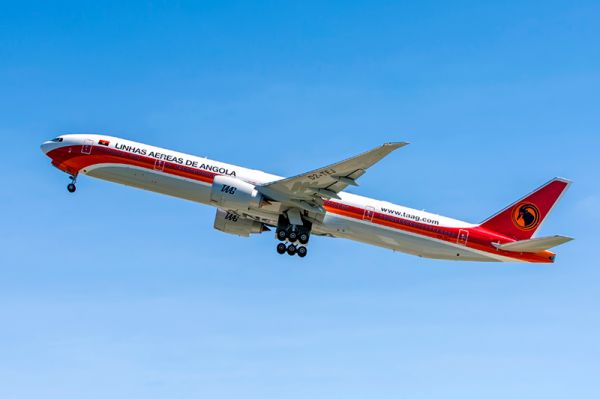 And English is not widely spoken by the flight attendants as it wasn't really necessary so far. The purchase of bigger pillows and blankets for premium classes is on the list, but currently there is a lack of funds. One has to set priorities.

TAAG flies on time and, as far as one can say, safe, with modern aircraft. And that for bargain fares, sometimes. At least these basics are right. But there is almost a total lack of service mentality, and some seats are technically in a bad state. It will be a long way for TAAG to become the "Emirates of Africa".