Taking the Delta One Business Class over the Atlantic

AMSTERDAM - For all Delta departures from Amsterdam, an important hub for the Skyteam partner, there are special procedures before boarding. All departure monitors and even the boarding passes don't indicate the real departure gate, but instead a special gate at which US-bound passengers have to undergo special questioning.

As far as I can see this is only handled this way by Delta, at least in this magnitude. D1 is such a questioning gate, even with a separate lane for Sky Priority customers, passengers with a high frequent flier status or a Business Class ticket. But it's quite crowded here before the mid-day departure peak of transatlantic flights.


Flight Report Delta
Airline
Delta Air Lines
Aircraft Type
Airbus A330-300
Cabin
Business Class
Date
May 14, 2017
Route
Amsterdam - Atlanta
Flight
DL75
Luckily, the very competent KLM staff in the Schengen-area Crown lounge, having to had to elegantly solve some problems with my ticket, had told mere that there was another check point upstairs beneath the other Crown lounge in the international terminal. Here I am swiftly processed.

The officer even knows that my ticket was rebooked and asks why (delay on the previous day). Only after satisfactorily closing the questioning he puts a green sticker on my passport and writes the actual boarding gate on my boarding pass. Then I can spend some quality time in the spacious KLM lounge working before it's time to board. 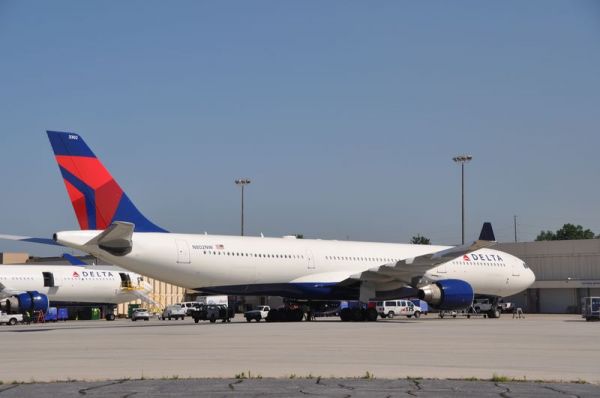 A big crowd is squeezing into the separate boarding lanes at the gate, apparently many also queuing in the Sky Priority lane that don't belong here. But things move swiftly in any case. Delta has taken over a big number of Airbus A330s after merging with Northwest, also the aircraft operating today shows a clear hint of its heritage in its registration N814NW.

In 2008 Delta first introduced its new Business product Delta One, which is installed since 2014 on all about 150 long haul aircraft. It consists of a Business Class cabin seating 34 in 1-2-1 configuration in a reverse herringbone pattern, meaning the view from the single seats goes out the window.

I would have loved such a window seat, because especially on daytime-flights I want to be in charge of daylight at my seat. Because of my short-term rebooking I unfortunately don't get a window any more, but have to make do with seat 7G, in the aft part of the Business cabin in the centre of the aircraft.

The two middle seats are joining each other at the foot ends, while the actual seat pans are stretched out far apart, and thanks to the curved walls serving as privacy dividers, one hardly sees the neighbouring passenger. A real minus of the seats is the lack of storage space, I end up putting my shoes up in the overhead bins, my newspapers on the floor beneath the seat, and I only briefly unpack my laptop to work and put it back into my carry-on straight after. 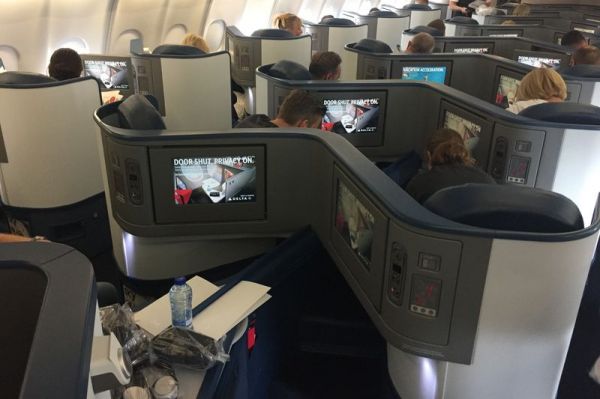 Nevertheless, judging from its hardware, Delta One is a product superior to many European airlines, for example compared to Lufthansa, who still seats its Business Class passengers in 2-2-2 layout per row. It might be surprising for some Europeans that US airlines, now very profitable again, are now driving forces of product innovation once more.

This shows at Delta, which will introduce one of the first Business suites with sliding doors from fall in the A350, called Delta One Suite, as well as United with its Polaris product. What Americans at best truly excel in is to strike the right tone to create a relaxed atmosphere. I have only just stored my cabin bag, as I take a few photos as usual for this column.

This is often not that much appreciated by crewmembers, who just want to see everybody quickly in their seats before take off.

Very different here: Burt, a flight attendant, approaches me and offers to take a photo of me in my seat straight away. And he almost urges me to go see the cockpit and take a few snaps there before take off. I initially had not even recognized Burt as crew, because instead of a white uniform shirt and tie he wears a dark-grey navy sweater, only a tiny pin with the Delta logo and his name shows his function. 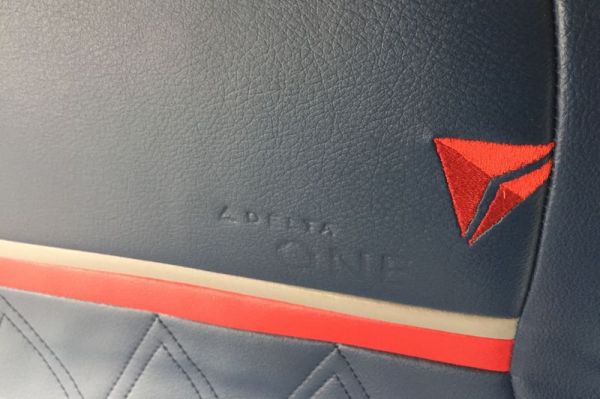 "This is part of our winter uniform", Burt laughs when I ask him, "and I love it because it's so comfy." And as we are chatting already, and this is shortly before doors get shut and usually there is great hectic, and this is a full flight, Burt casually asks me: "Do you care for a beer?".

I'm a bit perplexed, but I am warm, so I say yes, and within seconds Burt appears with a can of ice-cold Heineken, we are in Amsterdam after all, without a glass. Like at home in the kitchen, a quick beer straight from the can. I haven't felt as spontaneously welcome on an aircraft in a long time. I also try a glass of sparkling wine, which is later offered from a tray.

US airlines have the strange habit of pouring French champagne strictly only inflight, that's why Delta even carries half-size bottles of pre-take off sparkling. But it tastes reasonable in comparison to lesser quality preflight bubbly that has been put in front of me by other American carriers.

Our flight is 40 minutes delayed, but the captain announces that we will still be on time after eight and a half hours of flight time at the world's biggest airport by passengers handled, Atlanta. Very efficiently, the crew takes lunch orders for the main courses before take off. In the air, a mix of warmed nuts swiftly arrives, and I drink a glass of Gardet Brut Premier Cru champagne with it. 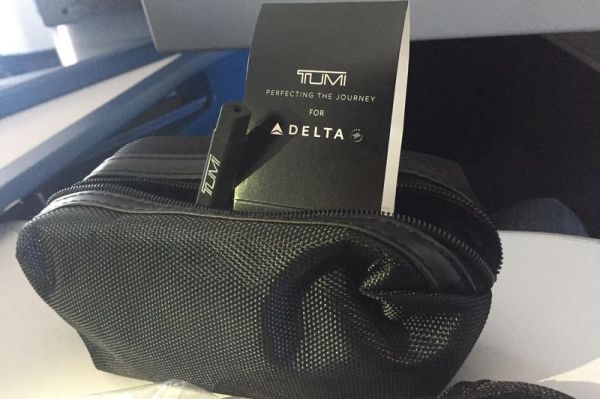 The nicely designed glasses catch my eye, later I see even more stylish glasses for red wine and cocktails. These are all part of the Alessi for Delta collection, a line of cutlery, china, pepper- and salt dispensers, trays and glasses, that Italian label Alessi designed for Delta. Everything from an hexagonal serviette ring to a mysteriously patterned plastic tray and stunning square teapots.

It only strikes at the second look, as one wouldn't have assumed so much refinement at the world's second biggest airline. Delta seems to really push co-branding with well-known icons: The amenity kit comes from Tumi (I especially liked the small purple-grey hard-case on the return flight, outbound they gave out a small black bag), containing cosmetics by Kiehl's, among it a very nice grapefruit-scented moisturizer. And Delta One passengers sleep under duvets from Westin Hotels Heavenly collection.

While I am listening to an R&B CD from the IFE's audio selection and at the same time follow our flight on the interactive map (unfortunately not very detailed and not enabled to zoom in), the tray with appetizers swiftly arrives, for which there was no choice. To eat I extend the two-piece table from the side console. 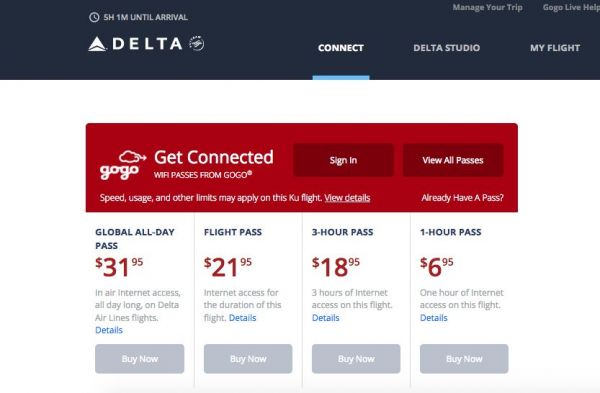 On my Alessi tray I have a colourful arrangement of lemongrass prawns with mango coulis plus a radicchio and rocket salad, which is strangely served with fresh strawberries and Roquefort cheese plus croutons. A different kind of croutons also swim on the white onion soup. Looks nice, but prawns and soup taste a bit bland, but still a pleasing ensemble.

The four main course choices are creations of some unnamed Dutch chefs, unusual in all the bragging with star chef names. There is fillet of beef with potato gratin, corn-fed chicken breast with polenta or truffle raviolini with cheese fondue (?!). I opt for the lowland cod with dijon mashed potatoes, hollandaise sauce and spiced sea beans.

And what shall I say, it doesn't only look interesting, it also tastes terrific. The slightly sour sea beans go very well with the fish and the Dijon mustard aroma. Unfortunately, Burt is very slow in offering wine and refills, but in any case the Argentine Catena High Mountain Vines Chardonnay is a good match for this dish. And for desert, we are in America after all, Delta as most US carriers serve the legendary vanilla ice cream sundae, even if there are other options such as chocolate ganache with cinnamon yoghurt or cheese. 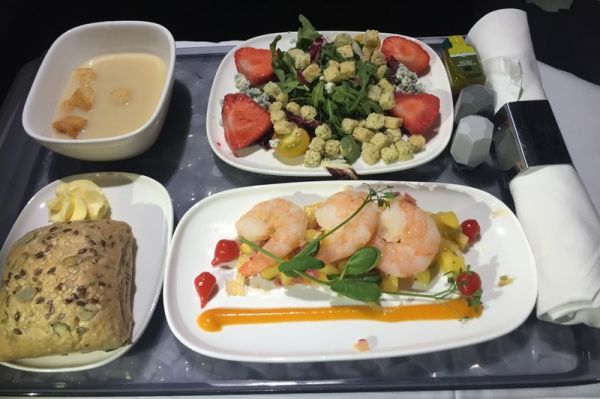 I ask for red berry sauce and nuts over my two huge scoops of vanilla ice cream, a bit too much of it for my taste. Yummy anywqay, eaten with a whimsical heart-shaped spoon. When I have just managed to finish this giant portion, Burt comes back with the trolley and whispers to me: "You want a double?". I decline, thanking him, I'm already full.

After a bit of work, a bit of sleep in the comfortably long (about two meters) but not very wide bed and a good movie I am still too full for the next American treat: Warm chocolate chip cookies from the galley oven.

Only when two hours later, shortly before landing, the trolley re-appears, I am ready for some more food. And I am not disappointed, as so often before on Transatlantic flights, where some airlines don't put any effort at all in the second meal. Delta, however, pleases me with Soba noodles in a broth with shiitake mushrooms and vegetables. 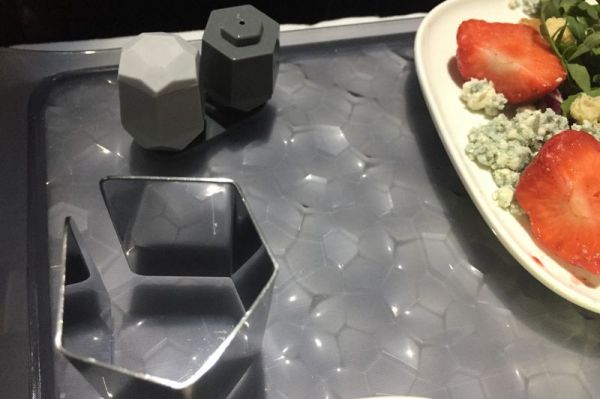 I leave the three pieces of lemongrass chicken untouched, but the rest is a very agreeable light meal after a long flight. Which then ends indeed almost on time at Hartsfield-Jackson Atlanta International Airport. Only queuing at immigration in a packed arrivals hall remains, but that's not Delta's fault.

A convincing transatlantic Business product of the second-biggest airline in the world. The famous Southern hospitality shines through when the decent hardware is matched by a relaxed crew. Once Delta reaches the market with its suites featuring sliding doors, its Business Class will remain one of the leading offerings from North America for years.