Icelandair as cheaper premium alternative over the Atlantic

HAMBURG - Icelandair is a booming airline, last year it jumped the four-million threshold for the first time, carrying 4.1m passengers. Only in 2009 it flew just 1.3m customers. Then in 2010, a volcano erupted on the Atlantic island, paralysing air traffic over Europe for days.

This natural event, experts agree, brought Iceland onto the worldwide tourism map. Incredible visitor growth rates of up to 40% annually were the result.


Icelandair FI510
Airline
Icelandair
Aircraft Type
Boeing 757-200
Cabin
Saga Business Class
Date
September 22nd 2017
Route
Keflavik - Hamburg
Flight
FI510
Icelandair's fleet has grown to a stately 30 aircraft (26 Boeing 757s, four Boeing 767s). And one has to see these dimensions in light of the fact the there are just 340,000 Icelanders. But they were very gifted already since the 1960s to take advantage of their geographic position in the middle of the Atlantic to offer cheap connections between Europe and North America.

Initially they managed to circumvent the former IATA cartel by operating from Luxemburg. Today Icelandair takes a decentralized approach especially in Germany: Frankfurt, Munich and from November 3 also Berlin-Tegel are served year-round, while Hamburg flights are seasonal, but also offered in winter. 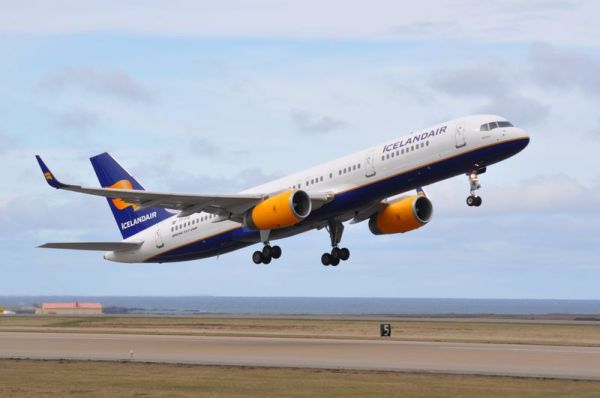 There are two destinations added in North America in 2018, Dallas/Fort Worth and Cleveland, Icelandair thus connects its efficient hub in Keflavik with 20 cities then in the US and Canada, often with transfer times of only about an hour. So elapsed travel times are not longer as if passengers from Berlin or Hamburg would have to change planes elsewhere.

On this dark September morning I am just travelling from Reykjavik to Hamburg. Already at 5.30am I'm on the Flybus, under way to the international airport at Keflavik, almost 50kms away. There, despite the early morning hour, the terminal is very busy, because between 6 and 8am is the time of the big morning wave of flights coming in from America and going out to Europe.

And obviously many passengers take the opportunity for a stopover in Iceland, actively promoted by Icelandair, which doesn't charge higher fares for taking a break. I just travel with a carry-on and get my boarding pass printed at a kiosk, having reserved my seat 4A online already. 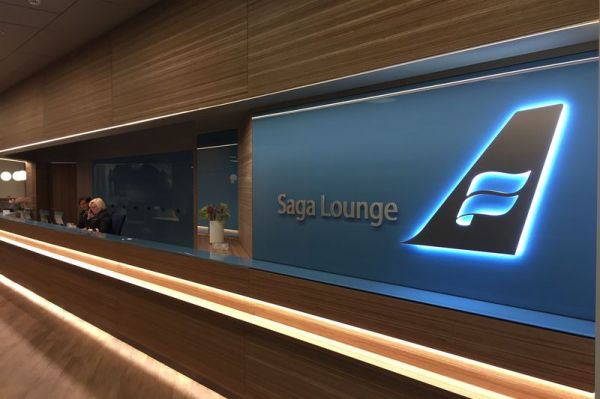 Then it's one floor up. The number of security lanes has been increased in Keflavik several times, the sign says it'll take about ten minutes. I don't see a specific Fast Lane for Business Class customers, but shortly before reaching the main queue I spot an extra entrance gate on the side. I scan my boarding pass, the gate opens, and I am done with all checks within two minutes.

Now I make my way through the bustling terminal to the new Icelandair Saga Lounge, which has been earning great praise since opening in May 2017. And it is indeed huge - more than 1,300 square meters. But also heavily crowded at this time.

There is still ample seating in the vast complex, but it gets very tight at the breakfast buffet, staff is not even able to replenish plates or fill up eggs or muesli. And as daylight arrives hesitantly outside, the weather makes it impossible to enjoy the promised panoramic views. 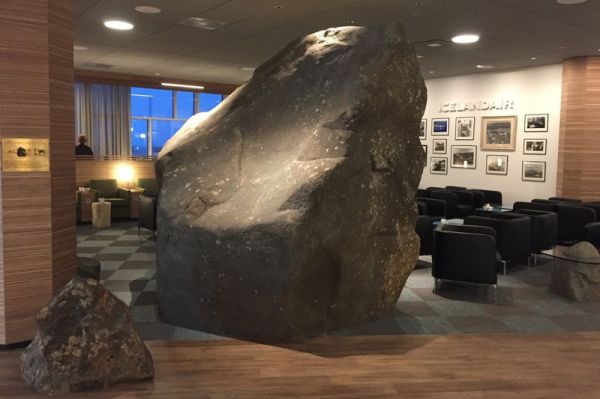 I start walking through the very stylishly designed lounge. Eye-catcher is a huge block of rock, a so-called Elf Rock. According to Icelandic mythology, there are elfs living inside, and they don't want their rock to be moved, if someone tries they are met with resistance. There are also smaller real rocks popping up in other parts of the rooms, surprising visitors.

The second eye-catcher is the square, glass-covered fireplace in the middle of the main lounge area, there are comfy loungers around it to get cozy. Almost a pity that transfer times in Keflavik are often limited, meaning only few passengers can spend some more time here. That's what I realize now, all of a sudden the lounge is almost empty and I can dig into my breakfast without any pushing and shoving at the buffet. 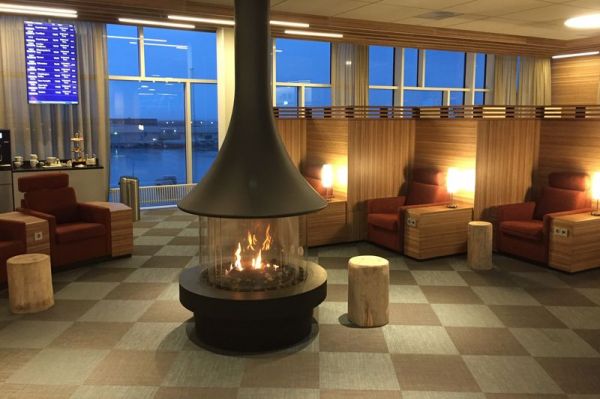 Even the toilets are decorated with backlit images of Icelandic landscapes, there are also spacious shower cabins. Definitely a very impressive lounge, an important part of the Saga Class product.

When it's time to board I walk down to the gate. Again, there are no signs indicating priority boarding, but beneath the long queue on the left there is another entry on the right, which I specifically head to and are able to board at once. You need a certain level of self-confidence here as a Saga Class customer or you probably stand in a few lines unnecessarily, a clearer signage, also to find the lounge, would be helpful.

This morning it's a Boeing 757-200 registered TF-FIC and named Magni that flies us. It is named after a volcano as all Icelandair aircraft, a sticker points out the nature of the volcano to passengers boarding through door 2L. This is where the customer journey to Iceland begins. Even if half of all passengers just transfer in Keflavik, everybody is supposed to take away a sensual impression of Iceland, and ideally plan on visiting the next time. 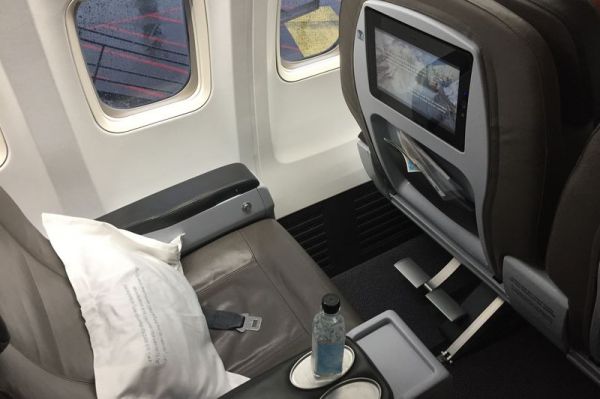 "We call this 'Icelandic mantra'", CEO Birkir Holm Gudnason told me, it was introduced by the airline about ten years ago. Good airline branding tells a story about where the airline comes from, and this is what Icelandair does masterly. While boarding, there is Icelandic music, almost the whole audio programme in the IFE consists of Icelandic artists, even on the airsickness bags there are explanations of Icelandic terms. Such perfect tourism marketing for its home country should be a role model for other airlines.

Icelandair had a fleet consisting purely of Boeing 757s for a long time, before the first 767s were added, and next year, the first new 737MAXs will arrive. Currently the fleet has an average age of almost 22 years, fairly old, also Magni had originally been delivered in 2000 to America Trans Air. It doesn't show inside, however, the cabin looks clean and well-kept.

Saga Class consists of four rows in 2+2 configuration. The grey leather seats however offer only 40'' (about 101cms) of pitch and a tiny recline of six inches, with its footrest it physically appears like a good Premium Economy Class product. This however starts mostly from row 5 as today, with lucky passengers seated here enjoying the Business seat, in total most 757s boast 22 of these. 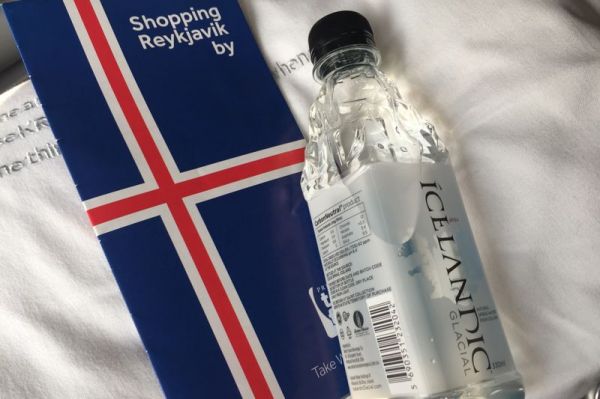 To call this cabin product Business Class these days is a bit bold, at least concerning the hardware, and especially on long sectors of up to eight hours flight time like on the longest route from Keflavik to Portland/Oregon.

"We are the only airline offering real Business Class seats on intra-European routes," CEO Birkir Holm Gudnason points out correctly, "on the North Atlantic we position Saga Class as a value-for-money option."

In fact Icelandair offers for example Hamburg to New York for 1,639 Euro in November in Saga Class and 1,132 Euros in Economy Comfort. Lufthansa charges 3,789 Euros on the same route for its Business Class with lie-flat seats and 697 Euros in Premium Economy. It pays to make a good comparison of what a product offers for which price.

Before take-off the flight attendant offers me a shot glass filled with a green liquid - an apple-ginger-spinach concoction she explains. Great idea and very tasty, I instantly order a second filling and regret that the glass is so small. Twelve minutes after the planned departure time we get going, the aircraft is pretty full. 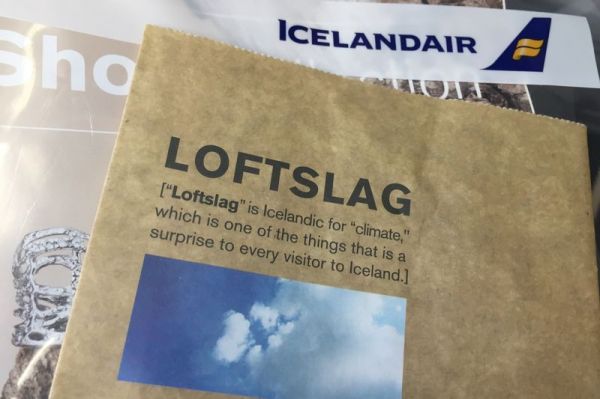 I have learned on the inbound flight that Icelandair offers wifi on board, gate to gate, meaning it already functions right after boarding. And even better: It's free in Saga Class. This again is not communicated in a very visible way. Because of the mostly fairly high charges I rarely use inflight wifi. But even in Economy Class Icelandair charges only four Euros for the entire flight, a real bargain.

The seatback screens are big, the offerings of audio and video content are fairly limited, but for me free wifi is much more beneficial, so I can actually work. And this is enhanced very nicely by the noise-cancelling headphones lent to passengers, I listen to some ethereal Icelandic sounds on low volume.

I had ordered my meals online for both flights, which proves a smart move as the selection on board is very limited. To be exact: On this morning flight there is no selection whatsoever and therefore not even a menu card. 40 minutes after take-off my fellow travellers are served the uniform breakfast, consisting of yoghurt, muesli and omelette with asparagus, as far as I can see.

As I had had a good breakfast in the lounge already, I request to get my meal about 90 minutes later. No problem says the flight attendant, as I had ordered "Nordic Tapas", which are cold anyway. What I get then doesn't look overwhelmingly appealing, and I would have liked to know what kind of sliced meat it is on my plate. 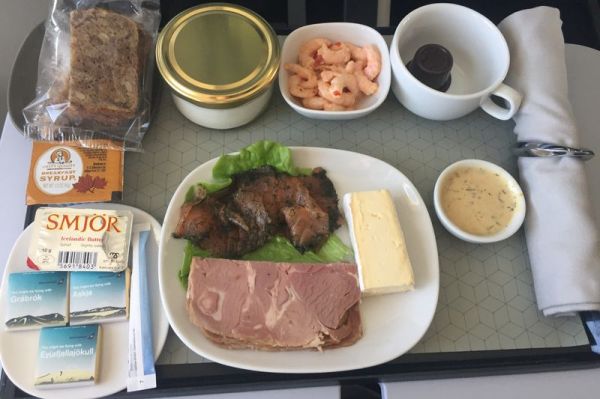 For me the meal looks a bit a like typical German "Abendbrot", dinner with cold cuts, apart from the Canadian breakfast syrup for the yoghurt. The chilli-marinated shrimps are very tasty, the gravlax salmon with honey-mustard sauce and the brie cheese are OK, accompanied by good German-style dark bread. All very solid, but a bit boring and not presented in an inspiring way.

The same I reckoned on the inbound flight, when the lamb fillet I ordered was lying fairly lonely on a plate. I smile when I see the little chocolates served bearing volcano names as well, one sports "Eyjafjallajökull", the notorious mountain of 2010 fame. Finally we land in Hamburg on time after a relaxing flight of two hours and 53 minutes.

Icelandair offers a multitude of good connections from Europe via Iceland to North America. The airline succeeds in a very special way to embed Icelandic flair in its product, a role model for others. For flights between Europe and Iceland Saga Class is a top product.

For long haul routes to North America however the seat comfort leaves a lot to be desired and can't compete with other airline's Business Class offerings, even though Icelandair offers its premium product often for much lower fares.
© Andreas Spaeth, aero.de | Abb.: Andreas Spaeth | Sep 29, 2017 09:57