ASTANA - Kazakhstan sounds very far and remote for most Western Europeans, hardly anyone has an idea about this huge country. It is the world`s ninth-largest even, home to only 18m people, while its economy is just about half the size of Ireland`s.

How far away it is also shows in the fact that business travellers from Germany for example often travel via Kazakhstan to Urumqi in the far Northwest of China, which is only about an hour’s flight from the two hubs of Kazakhstan.


Flight Report Air Astana
Airline:
Air Astana
Aircraft Type:
Boeing 767-300ER
Cabin:
Business Class
Date:
September 30, 2017
Route:
Astana-Frankfurt
Flight:
KC921
And another proof is the fact that the flight from Frankfurt to Astana, the capital, having sprung up from the steppes only 20 years ago, takes less than six hours, but the time difference here versus Central European Summer Time is plus four hours.

Until the end of 2016 Kazakhstan and all aircraft registered here were on the so-called EU black list, meaning banned from entering EU countries. But there was always one shining exception: Air Astana, having been founded 15 years ago by BAe Systems of the UK and a Kazakh fund. 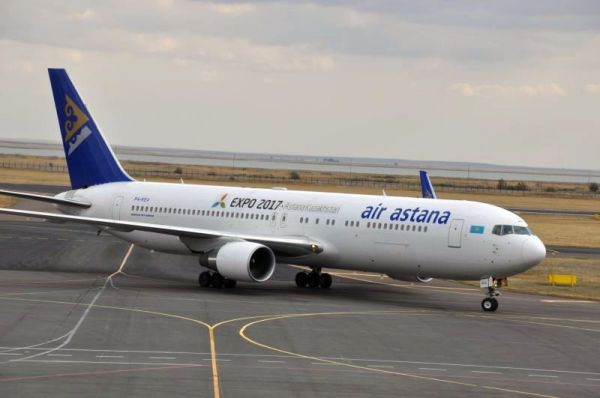 Its charismatic CEO, Englishman Peter Foster, had its fleet registered in the Caribbean island of Aruba, being supervised by the Dutch aviation authorities, meaning Air Astana could serve EU destinations all along.

As there are strong ethnic ties between Germany and Kazakhstan, where many people of German ancestry live, Frankfurt is the most important European route of the airline. At the same time Air Astana has a code sharing agreement with Lufthansa, which serves Astana as well.

For a long time Air Astana served Frankfurt with the Boeing 757, which as a narrow-body does not offer the same comfort level as a wide-body.

Since recently, during peak season from mid-May to mid-October the route is operated by Boeing 767-300ERs, which means a quantum leap in product offered, especially in Business Class.

The 757s are about 20 years old each, Air Astana flies three former LTU jets, whereas the 767s are the newest existing anywhere: Air Astana received the last Boeing 767s ever built in the passenger version in 2013/14.

On this fall Saturday I want to fly back from Astana to Frankfurt. The capital’s airport, only existing in its current form since 2005, had its capacity doubled in June with the opening of a second, spacious new terminal, inaugurated in time for the world exposition EXPO 2017, which ended recently.

With this addition, Astana airport reaches international standard. All airy and full of glass, also anything but overcrowded. I am traveling just with a carry-on, still pick up my boarding pass at the counter, get up one floor on the escalator reaching security and passport checks, all together doesn’t take more than five minutes.

There is no Air Astana Business Lounge

Surprisingly, though positioning itself as a quality carrier, Air Astana so far does not have its own lounge anywhere, neither at its hub in Almaty (with its aging terminal) nor in Astana (neither in the old nor in the new terminal). 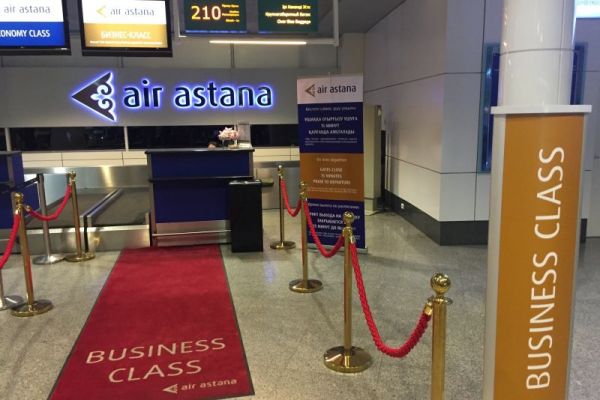 Therefore in Astana, Business Class passengers use the new airport-run lounge. It’s huge and elegant, offers 100 cosy seats, and is almost empty. On a buffet, cold and hot snacks are offered for self-service, while all beverages are distributed by a lady at a counter.

Why drinks are not self-service is unclear, maybe to prevent alcohol excesses. Free wifi works reliably and quick in the whole new terminal. The only non-Kazakh printed matter in the lounge, however, is a ten-day old issue of the English language government newspaper, embarrassing.

Boarding for the flight with a 16.10 local time departure only starts around 4pm, pretty late. Operating today is the 767 registered P4-KEA, built in 2013, it has arrived from Almaty before, as on all these flights, and stays on the ground for almost an hour.

Even transit passengers have to disembark and do their exit immigration formalities here, as vice versa passengers arriving from Frankfurt in transit to Almaty have to. As a Business Class passenger I can board at once. Air Astana’s Business Class cabin is already an eye-catcher on entering.

Mood-lighting is bathing the scene in hues of subdued blue, while the 30 seats of the Thomson Vantage model (in a 1-2-1 configuration) are upholstered in different shades of grey, accentuated by blue stripes and more importantly by newly designed patterns on pillows and headrest covers. 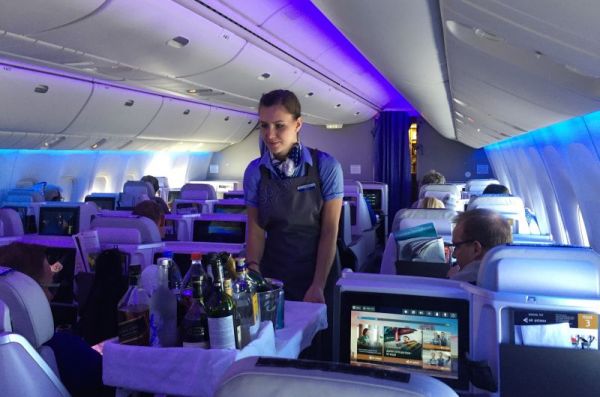 Single travellers, which most Business Class passengers are, find single seats at the windows. Best by far are the ones in the uneven-numbered of the eight seat rows, e. g. 1,3,5 and 7, seats A and K. 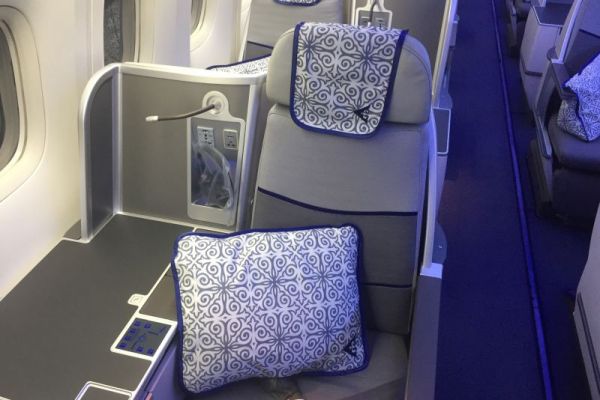 That’s where the seats are installed directly beneath the window, while the fixed table installed sideways shields the seat from the aisle. The other single seats have the disadvantage of being de facto open towards the aisle, meaning passers-by inadvertently come into body contact with passengers seated there. I am on seat 7K.

International press on board

What the lounge missed out on is made good by Air Astana: On boarding it offers to all passengers even German daily papers and magazines. Once seated, charming flight attendants in elegant uniforms offer water, freshly made lemonade (I prefer the yellow to the red) as well as Taittinger champagne from a tray. 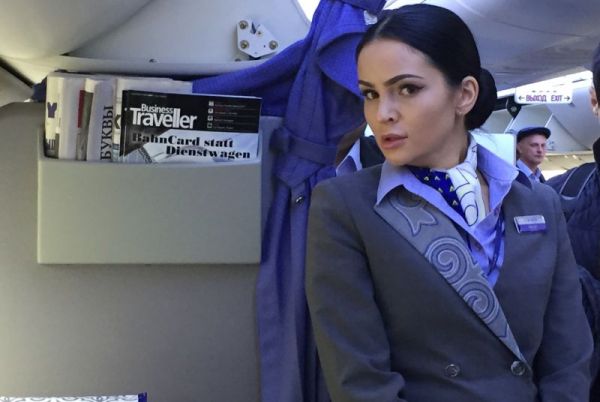 In general I have experienced almost all cabin staff, all of them Kazakhs, as very caring and engaged. “We have a high performance culture, people who want to achieve something in life come to Air Astana, that’s our big asset,” CEO Peter Foster told me a few days earlier. And here it actually shows.

At the same time Air Astana, as a full service carrier, has unbelievably low production costs on par with ultra low cost carriers.

Despite the late boarding we get going with only a few minutes delay, take off and fly over the capital, which looks as artificial from the air as it actually is, directly bordered by the endless steppe. Flight time has been calculated as being five hours and 40 minutes.

I recline my seat and see that the IFE offers a total of 46 movies and 1,294 audio options, I start listening to an R&B album. There is no wifi on board this 767 yet, as Air Astana has just equipped the first of three while the rest will follow soon.

Service begins, at first everybody gets a hot towel, already 25 minutes after take-off the trolley arrives with drinks and canapés. This was a negative on the short night flight from Frankfurt to Astana – service was very slow, despite every minute of more sleep counting that anyone can get. 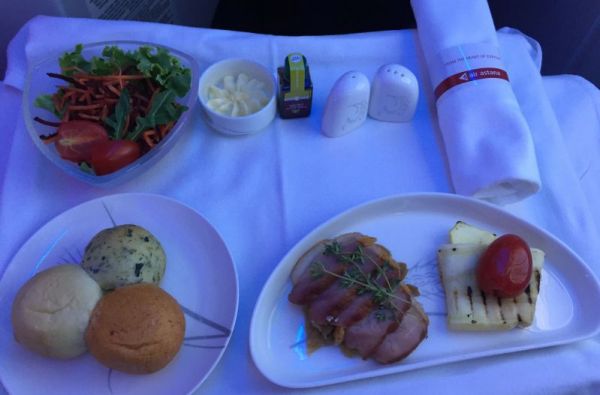 I take a look at the menu, being written in three languages as often in Kazakhstan – Kazakh, Russian and English.

There are four options for the main course: Chicken breast with carrot mashed potatoes and green beans, beef tenderloin with potato and cheese gratin and a red wine jus, fish fillet with cous cous and roasted vegetables in a coconut curry sauce with rice.

I take the vegetarian option after constantly having been served meat in Kazakhstan. Swiftly the tray arrives on my table, which is always a bit tricky to extend on the Vantage seat, also flying with the likes of SAS, Delta and Qantas. I ordered the soup and are always happy being served a soup on any airline.

Unfortunately one can’t see the food in its real colours, as the mood-lighting is glowing in an intense blue – why this has to be the case while it is daylight outside, I don’t understand.

In any case the roasted capsicum sauce is very tasty, even though it looks blue in this light rather than red. The wine list contains two reds and two whites. When I ask for the Chablis that I liked on the inbound flight, Nikola, the flight attendant, regrets that it is not available today.

Shortly after, she arrives with two bottles for a tasting, a South African Chardonnay and a Riesling from Alsace. Nice gesture, I take the Cape wine. The cold appetizer (duck breast with onion confit) is very yummy. It comes with a funny bread roll in three colours, all of which taste bland.

The main course, in contrast, is exactly to my liking: Big chunks of sweet potato, eggplant and pumpkin in a very tasty coconut curry sauce, accompanied by basmati rice. In front of me I can see a huge, fist-size block of beef on the plate of a fellow passenger, but I am much happier with my fine and light dish.

I am always taken aback when airlines in Business Class refuse to fulfil my request to have cheese as well as a sweet dessert plus maybe a bit of fruit. Nikola displays a sorrowful face when I ask for just this, but then promises to see what’s left over and bring it to me.

I indulge in the cheese platter, which is excellent: Emmentaler, goat cheese with black pepper and blue brie, all tasty. It comes with crisp bread and an extremely yummy chutney made of apricots, dates and pumpkin seeds, wow!

And then Nikola appears and proudly puts a small plate with a mini slice of plum and almond crumble in front of me. A big mug (elegant china!) of hot Earl Grey tea arrives as well as ordered. In terms of its culinary experience, Air Astana is definitely a high-flier.

After the filling meal I instantly feel like a nap, I extend my seat into a full-flat bed. It’s a bit irritating that I don’t succeed to lower the armrest on the window side, same problem as on the night flight, though I’m sure it’s possible with the Vantage seat. 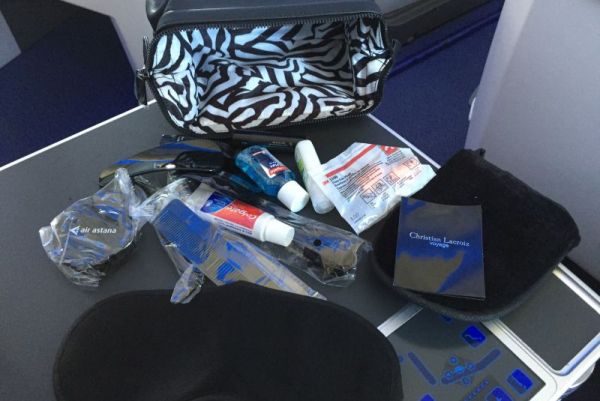 Still I doze off quickly, until I realize Nikola is standing beside me, covering me with a blanket. You only see this normally in kitschy airline advertising spots, this is the first time I genuinely experience it.

Meanwhile the mood-lighting had been turned off, shortly before landing, it’s still daylight outside, it’s glowing again. These kind of light games on a day flight appear to be quite random and lack a clear concept. In any case it’s a relaxed flight, we land overly punctual after only five and a half hours flight time.

Air Astana, mostly unknown internationally, puts the benchmark quite high in Business Class on board the Boeing 767 and is easily able to compete with leading airlines globally in its seats, service and catering.

It’s unfortunate that in the winter season from mid-October to mid-May "only" the Boeing 757 flies to Frankfurt, which can’t offer by far the same level of product. A uniform wide-body product on such routes would be highly desirable.
© Andreas Spaeth | Abb.: Andreas Spaeth | Oct 20, 2017 12:53