San Francisco - Hardly any product launch has stirred so much interest and discussions among frequent fliers as United Airlines did when it launched Polaris. When the world’s third largest airline announces a revamp of its premium product as United did in June 2016, this naturally raises expectations.

And these are not fulfilled yet for the big majority of United premium customers, as it turns out the big announcement came about two years early. Because even today, almost one and a half year after, only 15 out of 171 wide-body jets of the United fleet are equipped with the new seats on board, 14 new Boeing 777-300ERs fresh from the factory and one retrofitted 767. 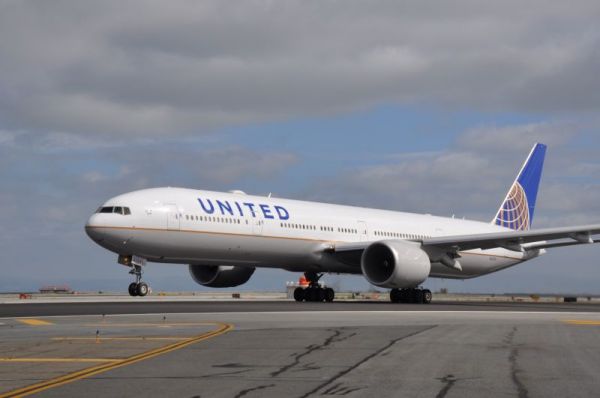 United stresses that Polaris comprises much more than just new seats, but that hasn’t been properly understood at least by passengers who seldom fly the airline.

Since November 2016 all Business or First Class long haul flights are branded as Polaris, meaning everything from enhanced duvets to better catering, mostly the Polaris lounges which are described as game-changing.

So it doesn’t come in handy that there is just one of these so far, namely in Chicago, from where there is comparatively little long-haul traffic. So far Polaris could almost only be experienced on Transpacific flights as the majority of the Boeing 777-300ER fleet is deployed in San Francisco.

Since the switch to winter schedule on the last weekend in October, the first European route became part of the still small network where the new seat is guaranteed: UA58/59 between San Francisco and Frankfurt, which is United’s only non-stop between both cities in winter.

The deployment of the new Boeing 777-300ER follows the retirement of the Boeing 747-400 flown here before, prior to being phased out by United. Flight UA58 departs from San Francisco at 14.45, and around lunch time the modern international terminal is nicely quiet. 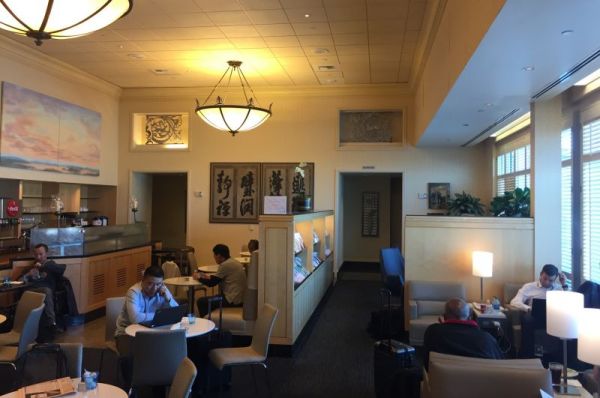 I travel just with a cabin bag and have checked in online, still I briefly go to the almost empty premium counter to ask which lounge I can use. I had been advised online that the lounge in the international terminal has been closed for refurbishment.

Now I learn that I can instead use the former United First lounge close to my departure gate. First Class at United is being phased out, also my flight to Frankfurt is just offering Business, Premium Economy and Economy seats. After the swift security check I make my way to the indicated lounge.

It has nothing to do with Polaris yet but I am still positively surprised. Lounge experiences in the US are normally very sobering for Europeans as they have to pay extra for alcoholic drinks mostly and the snack offerings are minimal.

Polaris however is even promising restaurant service with waiters for its future lounges. This is not offered here, but still a fairly lavish buffet with a wide selection from hot soup to a variety of salads and snacks, especially a superb selection of wines and spirits for self-service.

There are four whites, a rosé plus Moet champagne on ice. A huge improvement to all I have experienced as a Business Class passenger in lounges in the US so far. I don’t believe however that this kind of variety will be kept in the new Polaris lounges.

25 minutes before the scheduled departure time I can board straight away without waiting or pushing. While outside there is bright sunshine, entering the aircraft is like entering a night club. The cabin lies in darkness and is lit up in the blue of the new mood-lighting. 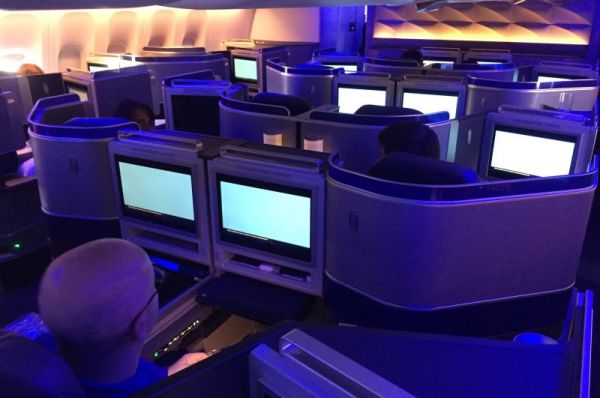 Fitting for the local time at destination, but strange nevertheless. I am very happy with my seat selection, 17L, the window seat on the right side in the last but one row in Business Class. These are the best places in the Polaris cabin: At the window in odd-numbered rows.

That window here doesn’t always really mean window I can see before me on 16L: It’s an aisle seat, facing into the aisle, and not having a single window nearby. Otherwise the centre seats 1D/G and 9D/G in front of the bulkhead are offering the biggest footspace.

The 60 Polaris seats in the new 777 are configured in a 1-2-1 layout, a huge advantage over the old United 777s with 2-4-2, despised as one of the worst configurations. New in the Polaris cabins is also the alternating direction the window seats face into, turned towards the aisle or straight to the front of the aircraft. 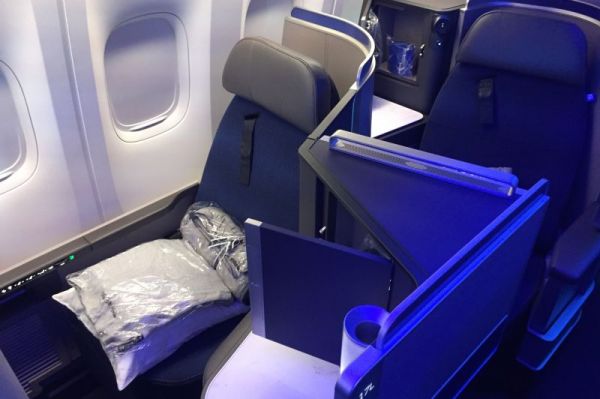 My seat offers a lot of privacy, I can’t see anyone else in the cabin. To the left of my seat there is a table covered by marble-imitation, onto which a fairly spacious cabinet opens up, which hides headphones and amenity kit.

On this flight it doesn’t come in its usual form, like the Polaris-zipper bag, but instead a two-piece tin can dedicated to the now-retired United Boeing 747. A very nice collectors item, containing 747 socks, 747 eyeshades and even collectable 747 photo cards.

On the seat there is a rolled-up plush duvet from Saks Fifth Avenue, one of the signature Polaris items, plus a thin woollen day blanket plus pillow, however there is no water bottle at the seat. 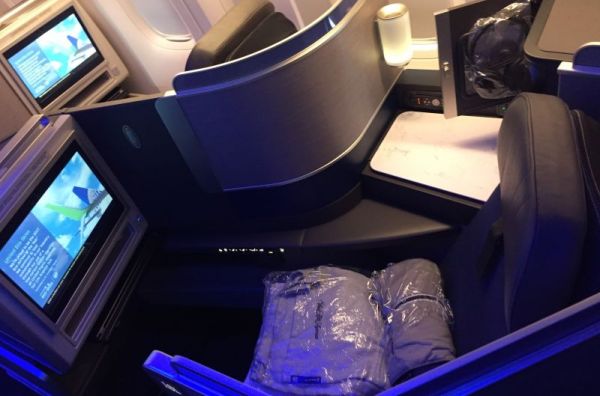 Towards the window there is a console, containing several push buttons to adjust the seat, whose functions are not all easily understandable, but as well a kind of dial switch, which enables passengers to operate the seat more intuitively.

At the same time the gap between console and the cabin wall provides a bit of space to leave a sweater or reading material. Underneath the 16” touchscreen monitor there is a flat stowage space easily accommodating a laptop or tablet. 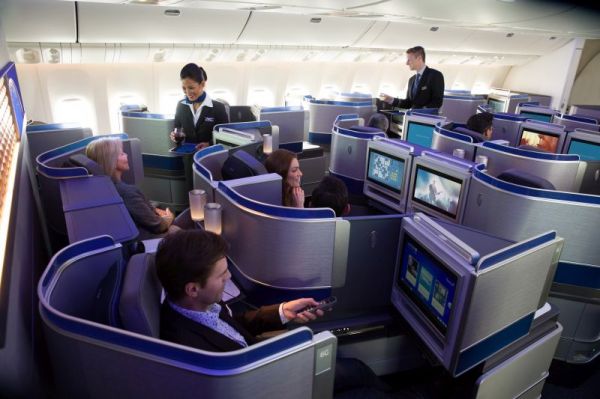 Unfortunately Polaris hasn’t changed the habit of all US airlines to offer cheap sparkling wine instead of champagne before take off, therefore I just take water, offered from plastic cups.

The flight attendants have to make an effort to convince all passengers that they also have to don the new shoulder harnesses like in a car, the shoulder belt is hooked onto the side of the lap belt.

We leave the gate absolutely on time, at take off the foldout table comes sliding towards me, it can’t be secured, so I have to hold it on rotation. I slide back my seat, put up my legs and want to relax. Part of that is to select a music album from the IFE.

But now comes the biggest disappointment that any airline has caused me in a long time: United has absolutely no more music offerings in its IFE content! 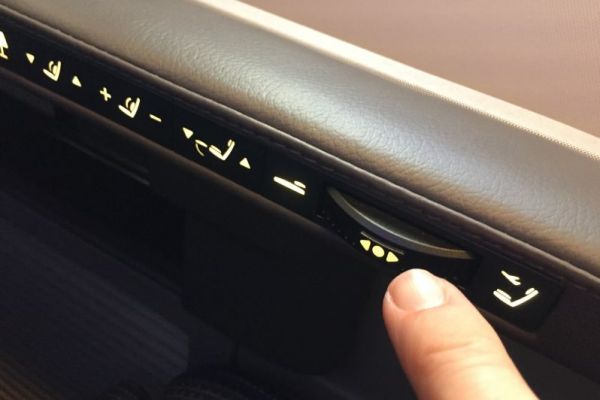 The purser on the last 747 flight outbound told me that this is the case since about two months and intended to save United the royalties it would have to pay for music! There is no more audio content besides podcasts and one classical concert going with a slide show of aurora photos.

I couldn’t actually believe it at first. Of course many people today have their own music on their devices, and apparently there are still music offerings after downloading a United App.

No music entertainement on board

But as a passenger I expect my airline to provide music on board, many premium carriers offer hundreds of audio albums. But not a single one on United. At least the interactive moving map is top notch, one can zoom in and select the scope.

The music-less flight would be easier to bear if at least a real highlight of United’s IFE would be available: On channel 9 one can listen in into the conversations of the cockpit with ATC. Unless the pilots decide to deactivate it, which unfortunately happened on this flight.

I am asked for my first and second choice for dinner, there are five main courses on offer: Short rib, spicy chicken in a Thai-style coconut ginger broth, arapaima fish fillet, Shai paneer (cheese in tomato sauce) or Quinoa salad with chicken. I ask for fish, alternative is beef.

Fish is scarce, but the beef is great the purserette tells me, that’s what she’s going to eat later. Unfortunately the service delivery is awfully slow, especially on a night flight. While in Economy the drinks trolley arrives in 20 minutes, I am only offered a drink one hour after take-off, much too late. 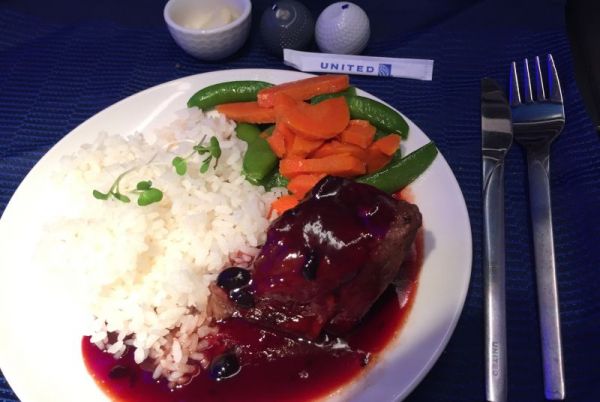 I opt first for a glass of champagne and then for the famous United wine-tasting, on a stand you get three glasses of different wines, I take three reds, all from the US and quite appealing.

Only one hour and 41 minutes into the flight I am served my starters: Lemongrass shrimp with Papaya-Mango salad plus a green salad of baby spinach with strawberries, grapes and orange. It tastes fairly well.

I usually almost never eat beef on board as it often turns out to be hard as a shoe sole from the galley oven. Not the case here: The seared short rib is very tender, the read sauce, misstated as barbecue sauce, fits extremely well, in short: It’s delicious.

For dessert there is the usual ice cream sundae, inevitable on all US carriers, Vanilla with all the extras, which United currently serves from paper cups as the Polaris glass bowls intended for this broke too easily recently.

Thanks to the positive surprise with the main course I am satisfied, but can’t say that the catering was really a wow aspect while it’s supposed to be an essential part of Polaris.

Once dinner has been cleared a snack buffet is offered on a counter in the middle of the cabin close to a galley, but lights are switched off almost right away so it sits there in total darkness.

I am also preparing myself to rest and I am impressed by the foot space and the length of the bed, it rarely happens that I am not hitting some wall with my toes. I could have enhanced the experience, however, had I known that I could have ordered a mattress cushion and a cooling gel pillow, as I am often too warm in an aircraft at night.

In general you need to be informed about the options in Polaris as you don’t get them offered actively. Only somewhere in the small print of a brochure distributed with the meal these options are mentioned. There are even Polaris pyjamas, but only on flight of durations of more than twelve hours.

I sleep well enough even without pyjamas, cooling pillow or mattress cover, so I skip breakfast (omelette or fruit with muesli) and only move my seat up again during approach. After ten hours and 23 minutes we are touching down overly punctual in sunny Frankfurt.

Polaris is a quantum leap for United compared to the previous products, especially in terms of the seat. It shows the airline is seriously trying to rise much higher in the rankings of quality airlines as before. Unfortunately it will still take a long time until the full-mouthed and premature announcements will become reality and at least the majority of customers can actually experience this product. To drop the music content from the IFE is absolutely contrary to the quest for quality at United and needs to be rectified soonest.
© Andreas Spaeth | Abb.: United Airlines | Nov 10, 2017 13:46