In the cabin of the Air France offspring Joon to Brazil

FORTALEZA - Air France, currently battered by strikes, is far behind in the quest of the airline industry to lower costs and become more efficient to sustain tough competition. One way to achieve this is supposedly the new “Joon” brand, whose operational costs are 15-18% below the Air France main-line, according to Joon`s CEO.

Mostly because cabin crews work more for less, and despite the fact that pilots are still seconded from Air France. It is reported that Joon (its name having a connotation with “jeune”, meaning “young” in French) is supposed to save Air France €40m annually, peanuts compared to losses raking up by the current strike action. 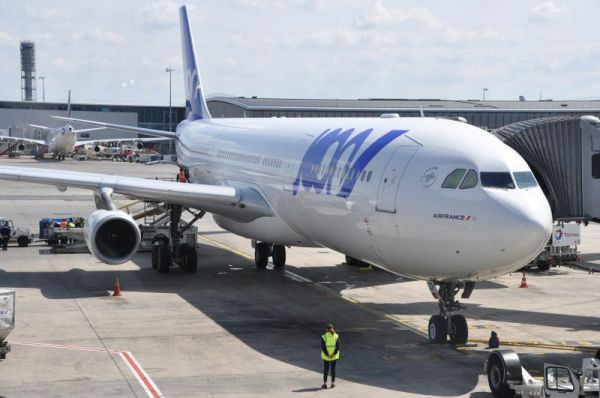 
Contrary to LEVEL from the IAG Group, Joon is not positioned as a low cost carrier, but rather as an innovation lab for fresh ideas that can be adapted by the mother.
During the unveiling of the brand last year Joon was presented as the “millennial airline”, a claim that has now been dropped as the fear emerged to put off other important target audiences.

Since December 2017 Joon flies within Europe with up to seven flights from CDG to Berlin being among the most successful routes, having been taken over from Air France. Since April 2018 the first two of ultimately four elderly A340-300s transferred from Air France’s fleet fly in the new Joon branding and boasting and revamped cabins on long haul routes.


First to Cape Town (taken over from Air France) and since early May to the Seychelles as well as Fortaleza as new destinations. This favourite spot for kite surfers is now served both by Joon/Air France as well as KLM functioning as a hub for domestic transfers within Brazil with partner airline GOL.
Inaugural Flight to Fortaleza

My flight with Joon is the inaugural service from Paris to Fortaleza, beginning in the newly renovated Air France lounge in terminal 2L, opened in January. It boasts an area of 2,180 square meters and will only be fully operating in July, then also offering a hip bar.

Already now the venue offers appealing quiet areas where indeed tranquillity reigns, while the front of house is a hive of activity. Even wellness with facials can be booked on the spot.

A big draw are the sauna cubicles, one for each gender, which are bookable subject to availability by just one person only (or people traveling together) - unlike Finnair, offering a small common saunas in its Helsinki lounge.

In the main area of the Air France lounge a show kitchen freshly prepares hot dishes on a counter, here it’s quite crowded and most seats, even on the long bistro tables, are taken. But overall a real improvement of the CDG lounge offering.

At the gate Joon’s first long haul aircraft awaits, A340-300 F-GLZP, delivered to Air France in February 1999. Joon is now inheriting four A340-300s with an average age of around 20 years, two last A340s remain with Air France as backup aircraft.

The Joon livery in blue and white is pretty understated and just to make sure people realize the connection, there still is a small “Air France” writing and logo underneath the cockpit windows. The branding is more obvious with the cabin crew’s uniforms. 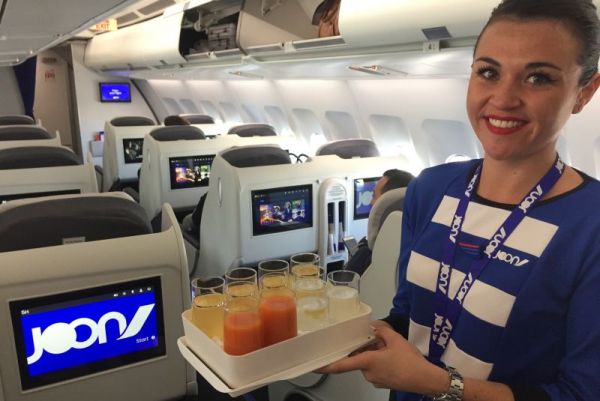 
Men are wearing blue polo shirts, ladies dresses and shirts in a kind of maritime look (with 60% of all garments made of recycled plastic bottles), trademark are white sneakers for everyone.

This is a pretty good fit for the mostly young crewmembers, especially the female ones. But once more mature flight attendants wear it, like on the inaugural flight, it becomes slightly out of place with an air of being professionally youthful.

To keep Air France’s premium clientele, Joon also offers three classes on board the A340 with 278 in total (in Economy three more than Air France in that aircraft): Business (30 seats in 2-2-2 layout) as well as 21 of the new Premium Economy seats (2-3-2) from the Boeing 787 directly aft. 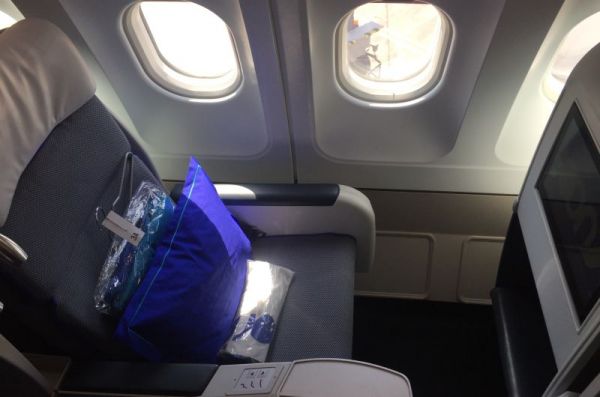 
In Business the already installed B/E Aerospace Minipod seats were taken over from Air France, apparently now slightly less angled at 175°, while the bed is still not lie-flat. Seat pitch, which was 61’’ (155cm) at Air France, is now indicated as being a tighter 59’’ (about 149cm).

While the screen size of 15.6’’ remained as before, the IFE content was as much renewed as the interior. Major flaw, especially for a “young” airline: There is no inflight wifi, only streaming of pre-loaded content, for which to use to its full extent you even have to download an app, something I reject out of principle.

This “birth defect” will only be remedied once Joon receives its first of ten A350s ordered from fall 2019, coming fitted with wifi straight from the factory. 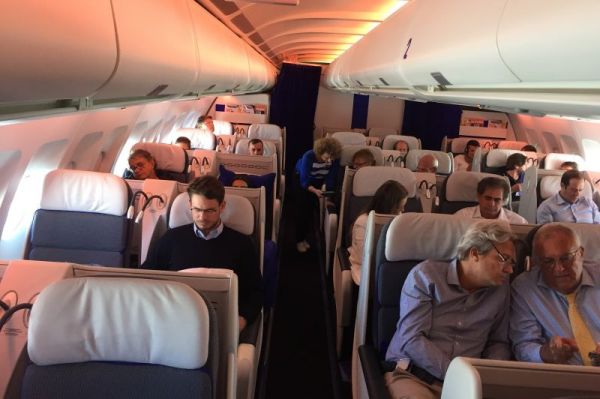 
The cabin is presumably the first brand new one for an A340-300 in many years as this aircraft type is winding down its operational life. The Joon blue on dividers and pillows in Business is quite decorative, as much as the newest generation of mood-lighting that I see for the first time on an A340.

My seat is 3A, a window on the left. Even though Joon with its new brand appears fresher, overall I can’t spot a huge difference to the Air France product, besides that even many Air France jets these days offer true full-flat seats, supposedly industry standard for some time.

At the seat I find a small water bottle as well as slippers and a shoe bag with Joon branding, while I like the blue Joon amenity kit made from a net-like garment the most, though its content is pretty modest. We leave Paris almost on time at around 1.30pm, at the height of lunchtime.

Inexplicably then it takes 56 minutes (!) after rotation until even only the drinks cart arrives. The food tray is handed out a full hour and 45 minutes after take-off. This is not supposed to take that long, maybe the crew has to get acquainted with the new aircraft, though it already flies since a month. 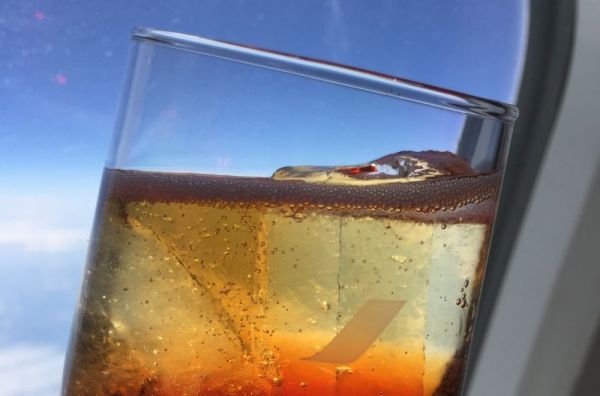 
One element of distinction for Joon is the signature cocktail created by the “Experimental Cocktail Club”, a Parisian bar. Today it’s named “Aéro Club”, consisting of Campari, Martini Rosso and champagne. I order it and find it to be very good, something different for a change.

With it I get two small plates, nuts and an amuse bouche of “anchovy pie with a twist”, a yummy brown crème with whipped cream, hardly touched by anyone as it is unclear what it is unless you look it up in the menu, from the crew comes no explanation. 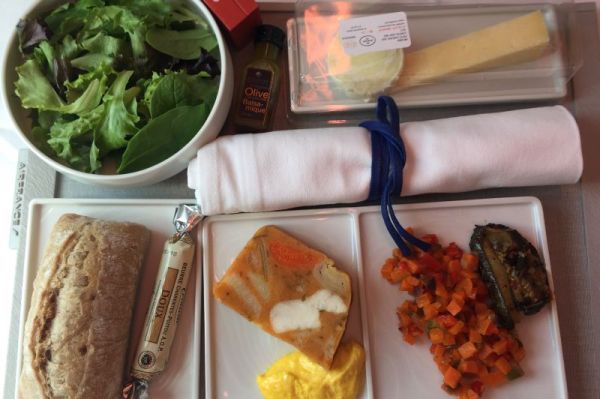 
There are four main dishes to chose from: Lamb stew with spring vegetables, guinea fowl with quinoa risotto, zander fillet with polenta and asparagus or ricotta and asparagus lasagne.

For me there’s no question here, as I have ordered an Indian menu online from a selection of half a dozen dishes. As a starter everyone gets a bouillabaisse-style monkfish terrine. Tastes formidable, but again I see many passengers eying it sceptically and hardly eating any of it.

When I spot the fish dish on my seat neighbour’s table I mostly see peas on the side, which weren’t even mentioned in the menu. Strange. My choice, Indian rogan josh lamb curry with rice pilaf and vegetables, doesn’t look as appealing as online, but it tastes delightful and -most important of all- is well spiced, which I love.

The cheese platter is a little frugal, but instead I can indulge in desserts. Luckily Joon has kept the trademark of its main line mother, offering fruit sorbets, yummy, I have mango and passion fruit, topped off by a plate of small gateaux and a glass of calvados, that’s France how it should be. 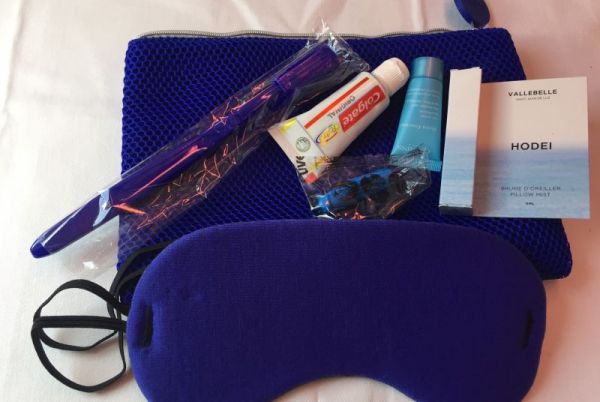 The flight map is not interactive, but still shows how we cover almost the whole distance flying over the ocean. The IFE offers ample content with 1,200 hours of programme, even without the app.

I especially like the offering of 700 new and older music albums of all kinds. I don’t watch one of the 200 films on offer during this day flight and I don’t rent “Allosky” VR glasses for 15 euros, which supposedly offers a wide spectrum of 2D, 3D and 180° VR films.

What’s a bit annoying with a full Business Class cabin is the fact that the front lavatory can’t be used as it is reserved exclusively for the cockpit crew, while the other two toilets in the back are often occupied.

After lunch I take a two-hour nap, and I don’t mind the slightly angled bed for that. In contrast, on the night flight home later I am annoyed by the inevitable slide effect, which is history already at most airlines. 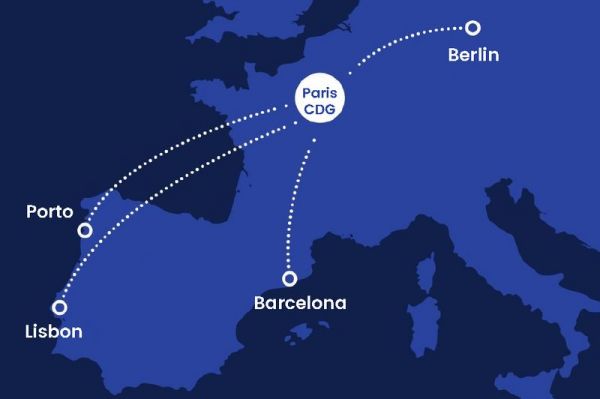 Shortly before the end of the flight, and without being hungry yet again, the second meal is served, either a cold (salmon with pasta salad) or hot (potato cake).

I opt for the latter, and the dish doesn’t look appealing, with a hard-to-define pile on the plate, hidden underneath the grated potatoes is “smoked cream” as well as mushrooms and asparagus. Tastes pretty good, but most of the other passengers hardly touch it and don’t even discover the cream underneath.

A bit of explanation from the crew, which obviously has no clue as to what they are serving, would be helpful. After eight hours and 55 minutes we touch down almost on time and are celebrated for our first landing with a water salute by the airport’s fire brigade.

Joon offers a solid product in its new A340 cabins, however only marginally different from that of its mother Air France. From a passenger point of view it is unclear why there is a need for this new brand.

Joon will operate the first of ultimately ten A350s from fall 2019 and then will overcome flaws such as the missing wifi or the non-flat seats, and maybe has the chance until then to carve out the differences to the main brand more clearly and sharpen its own profile.
© Andreas Spaeth | Abb.: Andreas Spaeth | May 25, 2018 12:24